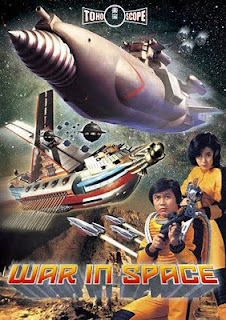 Sitting down to watch The War in Space—a.k.a. "Star Wars in Japan"—was actually kind of cool because, even after all these years, I had never made it through the entire picture before. Way back when, I'd started it a time or two, but in my impatient youth, I couldn't get through the first 15 minutes without either yawning or rolling my eyes. The movie is more or less a rehash of every other Toho alien invasion movie ever made, and borrows very heavily from 1963's Atragon—with a dash of Toei's Space Cruiser Yamato for good measure. A few of the good ol' regular Toho cast members appear here to raise a smile, such as Ryo Ikebe (Battle in Outer Space, Gorath) as the stoic-to-the-point-of-sleepwalking captain of the spaceship Gohten; Akihiko Hirata, best known for his role as the tragic Dr. Serizawa in the original Godzilla; and Goro Mutsumi, the alien leader in both Godzilla vs. MechaGodzilla and Terror of MechaGodzilla, back in this one as...an alien leader, now dressed like a sparkly garbed gladiator. For the appreciation of heterosexual males, we have the very hot Yuko Asano, who doesn't do a whole lot but does appear in an appealing bondage scene that almost pushes the limits of a G-rating.

The direction by Jun Fukuda, who directed several of the later Showa-era Godzilla films, comes off as either breakneck or altogether stalled, which largely accounts for my past inability to sit through the movie. The hysterically bad English dubbing—typical of many 70s' Toho films—often has characters reiterating (at least once) the same lines that another character has just spoken. The real draw, though, the special effects—by Mr. Pyrotechnics himself, Teruyoshi Nakano—are a scream. High-tech the movie is not, certainly compared to Star Wars, which was made the same year; bobbing miniatures, stock footage, and sparse sets abound, yet Mr. Nakano does provide a true extravaganza in the area where he always excels: big old fiery explosions. There are lots of them, and they never fail to impress. There's something about watching actual miniatures blow up into blazing fragments that the most sophisticated CGI in the world simply can't rival.

Whereas all this cheese once stoked my ire—you know, being a serious SPFX movie fan—I find that, in my old age, they come together in a mix that is really quite fun. It'll probably be a while before I sit down to watch The War in Space again, but by God, I did it. I finally, really did it.

Posted by Stephen Mark Rainey at 5:38 PM No comments: 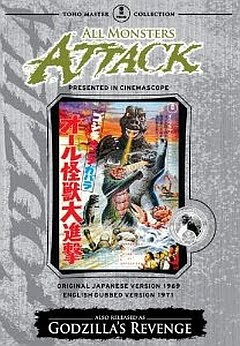 Ostensibly made for kids, Godzilla's Revenge is unique in that all the monster action occurs within the context of a young boy's dreams. One could go so far as to say that it's a "real world" movie, with Godzilla and the other monsters appearing only as the fantasy characters they actually are.

The landscape in which the little boy, Ichiro (Tomonori Yazaki), lives is a bleak one; it's set in Tokyo's industrial district, both of his parents work long hours and are never at home, and the older kids bully the poor little sod to the point that his retreat into fantasies of Monster Island is pretty danged sad. In his dreams, Ichiro meets Minya, Godzilla's son, who is similarly tormented by a big rubber beast named Gabara. Over the course of the movie, Godzilla attempts to teach Minya courage, the lessons from which Ichiro brings back to the waking world with him. This comes in handy, because some inept bank robbers, seeking a safe house in Ichiro's neighborhood, end up abducting him. By remembering the lessons Godzilla taught his son, he is able to stand up to them—and finally, he even faces down the rotten bastard kids who have been bullying him since the beginning of the picture.

Despite the fact that the lessons Ichiro learns about defending himself are dubious at best, some well-timed moments of levity manage to temper the film's bleakness, which—particularly for a kid's film—has the potential to be truly depressing. Ironically, some of the humor works better in the English version, just because the silly dubbing ramps up the movie's goofiness quotient. In the Japanese version, Minya's voice (yes, Minya talks) sounds not unlike a squeaky girl, whereas in the English version, he sounds remarkably like Barney the purple dinosaur after a few bourbon and ginger ales.

The other monsters in the film appear primarily by way of stock footage, from Godzilla vs. the Sea Monster, Son of Godzilla, and Destroy All Monsters, among others. The only new monster scenes of any note are those with Gabara—a turquoise, tail-less, warty, dog-like thing that walks upright and sounds like my lawnmower when I try to crank it for the first time after a winter's hibernation—and even these are not much to write home about. Gabara does have an electrifying grip, which he uses to shock poor Minya into submission on an occasion or two, a move that prompts Godzilla to take serious offense and mete out the revenge that one gathers the original English title must reference.

Minya, of course, looks just as he did in Son of Godzilla: just plain bad. The intercutting of stock footage from various films, all of which featured distinctively different Godzilla suits, is oftentimes jarring. The new monster scenes use the suit from Destroy All Monsters, which is still in fairly good repair at this point in time (by its final use, in Godzilla vs. Gigan, the suit had just about fallen apart). One could say, I suppose, that it's only natural for Ichiro to dream about Godzilla in his various incarnations, since, as a fan of the movies, he would have stored images of all those different suits in his subconscious. We'll go with that, okay?

Domestically, via United Productions of America, Godzilla's Revenge made its rounds of the drive-in circuit in 1971, originally paired with the U.P.A. release, Island of the Burning Damned (a.k.a. Island of the Burning Doomed), and later Toho's own War of the Gargantuas (also released in the U.S. by U.P.A.). The Classic Media DVD release presents both the U.S. and Japanese versions of the movie, which are mostly the same except for the language and the opening titles; in the Japanese version, there's a very silly monster march sung by hellishly obnoxious children, whereas in the English version, the titles are accompanied by a frenetic jazz number.

I never saw Godzilla's Revenge during its original run; in fact, I'm not sure exactly when I saw it for the first time, but I know I felt as if I'd been sucker-punched. This movie strikes me as one that adults think their kids would love; the real little kids are thinking, "This is stupid as shit," but they can't say that out loud because they'll end up getting whooped. I suspect that if this movie had been my juvenile introduction to Godzilla, I might not have ended up the die-hard daikaiju freak I am at age 50 (all too soon to be 51). Maybe I'm wrong, though; I saw Santa Claus Conquers the Martians when I was about four years old, and I still like Christmas.

As a Godzilla completist, it is necessary for me to own this film; it is not, however, necessary for me to view it frequently. Best I can say is that I applaud Classic Media for giving it as respectable a DVD release as it did with the other movies in their Godzilla series.
Posted by Stephen Mark Rainey at 9:21 PM No comments:

Wow. I was a huge fan of the 1970s animated series Space Cruiser Yamato, better known in the U.S. as Star Blazers. In Japan, there were three television seasons and five feature-length films, though the movies never received domestic release. The show was quite popular here in its day, and there's still a segment of anime fandom that keeps the memories alive. I haven't been much into anime, even the old classic stuff, for quite some time, but I think I'm really, really looking forward to getting a look at this. It's due for release in December.

Posted by Stephen Mark Rainey at 8:32 PM No comments:

The ol' caching bug has bitten again—and hard—since the weather has been quite conducive to hiking the past few days. Did a five-miler yesterday on the Lake Townsend trail, just north of Greensboro, accompanied by my friend Bridget (a.k.a. Suntigres). I didn't have exact coordinates for one of the caches, but the clue on the Web site and the proximity of two nearby caches left only a small area in which it could be located; happily, I was signing the logbook in short order.

Saturday, it was another mini-monster fest, with Mssrs. Bill Mann and Wayne Miller on hand for Monsters vs. Aliens, which was an unexpected hoot; Destroy All Monsters; King Kong Escapes; and a couple of episodes of Ultraman.

Big deal, so I have to geek out now and again. And I will do it again.

On a bittersweet note, yesterday was the ninth anniversary of my dad's death. Fortunately, these days, I'm better able to remember more of the good times than that last agonizing year before he passed away. I see an awful lot of him in me, especially as I've gotten older—both the good and the bad. The fact there was so much more good than bad in him gives me at least a little hope....

Onward.
Posted by Stephen Mark Rainey at 11:28 PM No comments:

Took the day off for Good Friday—and spent it mainly working in the yard: mowing, cleaning gutters, flattening ruts, mending the fence, etc., and so forth. Gack. But then pulled out me old guitar and did some wailing on "Timothy," from 1971, by the Buoys. Finest song about cannibalism ever to hit the Top 40. Here's a subsequent Buoys incarnation, Dakota, featuring vocalist Bill Kelly, from a 2005 live show.

Posted by Stephen Mark Rainey at 6:02 PM No comments: