"31 Days of Geocaching" has been one of those little gimmicks that Groundspeak — the owner of geocaching.com — devised to promote caching. For each day in August 2013 you found and logged a geocache, you earned one of these dorky little pieces of "souvenir" art to go on your geocaching.com profile page. I rarely need much additional motivation to go out on the hunt, but since I did log caches for the first several consecutive days in August, I decided I might as well attempt to shoot for the whole month. Happily, there were just enough unclaimed caches in the area for me to hunt without having to drive to Timbuktu, and it actually did prove to be quite fun. On some days, I got up extra early to grab a cache before work, which I really enjoyed... except for the getting up extra early part. See "Deep Discoveries" for the most intriguing find of the month. Anyway, it's all done, and there on the left is a shot of those 31 dorky little souvenirs I earned.

Found a half dozen today, including one at a particular favorite type of location: an ancient, very scenic graveyard. Last night, Ms. B. and I headed up to Martinsville to visit Mum, and from there, this afternoon, we made our way out to NC's Yadkin Valley to visit a couple of vineyards — Stony Knoll and Olde Mill, the latter of which proved to be one of the best we've been to in this region. Good dry reds! Anyhoo, on the way, we stopped in Germanton, NC, so I could go after "Germanton Fresco" (GC253GH), which lurks in a graveyard behind an old church that dates back to the early 1800s. It's a fairly haunted-looking place, which of course made me happier than an emu at a cricket farm. Oh yeah, an emu lives next door to the graveyard; we exchanged pleasantries, but he didn't seem otherwise inclined to chat with us. Overall, a most pleasant location to spend a few minutes on the hunt. Being buried in a place like this one might take a little of the suck out of being buried, I always say.

Posted by Stephen Mark Rainey at 11:49 PM No comments:

My latest tale... "The Game Changers"... done and sent out. One way or the other, I'm certain it will be inflicted upon numerous readers, and the more the merrier. In the meantime, in case you missed it previously, you might give my interview over at Ginger Nuts of Horror a look. It's an extensive, well-researched Q & A session with proprietor Jim McLeod. Tis here: Ginger Nuts of Horror Interviews Stephen Mark Rainey 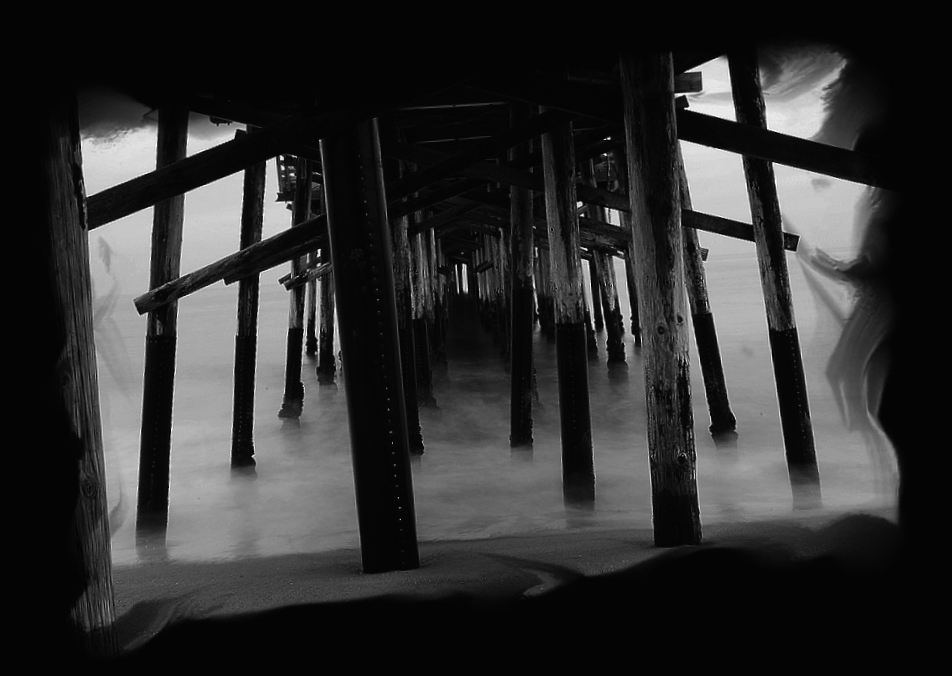 I'm sure you're dying a for a spot of Lovecraftian horror as well, aren't you. Got just the thing for you — and it's free. It's my right scary tale "Beneath the Pier" at Lovecraft eZine, from the January 2013 issue. It ought to get you right in the mood for "The Game Changers." Check that one out here: "Beneath the Pier" by Stephen Mark Rainey

Note that a couple of my tales made the 2012 Honorable Mention list in Ellen Datlow's Best Horror of the Year, Volume 5: "The End of Henry Switch Road," from Dark Discoveries issue #20, and The Gods of Moab, my novella for ye Kindle at Amazon.com. Heck, you can pick up the latter for a measly $2.99 — less than a half-decent beer — right here: The Gods of Moab by Stephen Mark Rainey 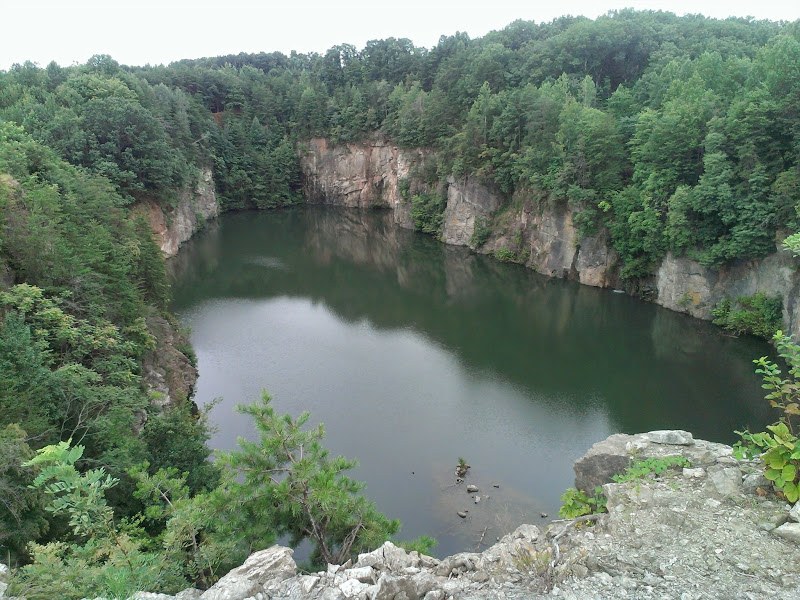 I've many times said the most enjoyable, oftentimes exhilarating aspect of geocaching is finding places I never knew existed. As often as not, they exist virtually next door, hiding just beyond the view of familiar, well-traveled roads and pathways. Over fifty-some years, I've explored just about every nook and cranny in and around my old hometown of Martinsville, VA, and there is scarcely a stand of woods or hidden back alley I haven't ventured into at some point or another in my life. Well, so I thought, anyway. This past weekend, I was there visiting Mum, and early Saturday morning, a new geocache was published ("Oh, the Places You'll Go," GC4JZVR). Being keen on perhaps getting first-to-find, I headed straight out to Kings Mountain Road, just beyond the city limits, parked along the roadside, and hoofed it past a bunch of boulders where the woods have been cleared to make way for some new construction.

Then I found myself facing that — the old quarry you see pictured above. The photo, of course, scarcely does the view justice (click on it to enlarge the image); I found it dizzying, and the spot where I was standing to take the picture — six feet or so from the edge — was as close as I dared venture. It's mostly just loose shale there, leading to a sheer drop of well over a hundred feet. Just east of the quarry (to the left of this photo), there's an arm of Beaver Hills Golf Course (sometimes less-than-affectionately known as The Rockpile) where I played golf several times as a teenager. Judging from the aerial views on Google maps, the quarry would likely have been visible from at least one of the fairways, though I have no recollection from those dim, distant days of actually having seen it. A cursory search for information on the place hasn't turned up much, but I find myself inclined to go digging deeper. According to a local geocacher, who used to work with my dad at Dupont, the quarry is rather infamous. Reputedly, there are several cars, some complete with bodies, in the bottom of that lake, which is some two-hundred feet deep. It is, after all, the perfect place to eliminate inconvenient evidence. I'm also told that, back in the 70s, someone went scuba diving in the lake there and never came out.

And yes, gracious, I did get first-to-find on that cache. 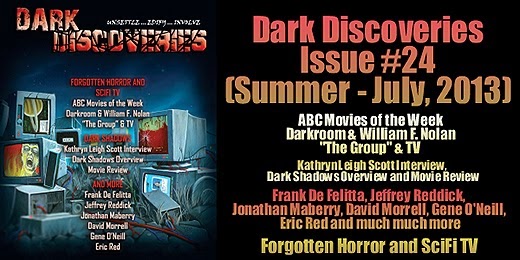 The ever-appealing Dark Discoveries magazine, issue #24, has hit the streets, featuring my extensive retrospective look at Dark Shadows, "Dark Shadows, Dark Decades," which kept me quite busy for a couple of weeks back in late May/early June ("Its Business Time"). The article is, per DD's usual standards, nicely presented. If you were a Dark Shadows fan, you'll probably find it entertaining; if you weren't, perhaps you'll learn something fun. There's also a nice interview with Dark Shadows star Kathryn Leigh Scott, lots of news and reviews, fiction by David Morrell, Gene O'Neill, William F. Nolan, Brian Sammons, and much more. Check it out here: Dark Discoveries #24
Posted by Stephen Mark Rainey at 1:01 PM No comments:

I spent a good portion of last week responding to a lengthy set of thoughtful and well-researched interview questions by Jim McLeod for his Ginger Nuts of Horror website. It surely makes me smile when someone shows genuine respect for me and even some fondness for my work, as Jim did with his interview. The whole business was a lot to go through — the final word count is over 6,000 words — but it was worth every minute of effort. If you've ever wanted to ask me anything about my chosen side vocation, Deathrealm, Dark Shadows, Godzilla, et. al., here's your chance; you'll almost certainly find your questions answered here. The interview went live at the Ginger Nuts website today. Check it out here:  Ginger Nuts of Horror Interviews Stephen Mark Rainey. Since Jim is in the UK, the MS Word file he provided me defaulted to UK English, so color came out colour and marvelous came out marvellous. I rather enjoy this because it makes me sound ever so much smarter.
Posted by Stephen Mark Rainey at 9:15 PM No comments:

Let's Get This Show on the Road! 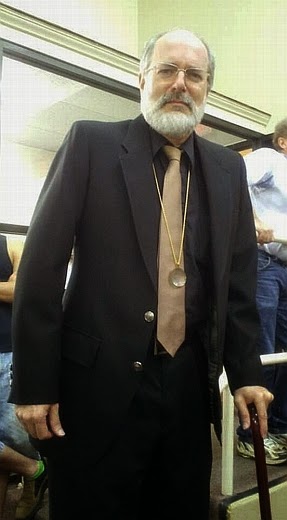 We had been sitting on the set of Invasion of the Killer Cicadas waiting for the director to call "Action!" for a while, and Ms. Sarah Smith — the director's aunt — was ready to up and exterminate some giant bugs. So she hollered, "Let's get this show on the road!" and, sure enough, before we knew it, we were in a town meeting formulating a strategy to destroy the monster insects that have invaded the little town of Martindale. Well, most of the forty or so people gathered there had that noble purpose in mind. However, one nefarious fellow — Professor Doctor Werner von Schwartztotten — was in attendance specifically to detail a rather sinister plan for world domination by way of engineering giant carnivorous insects. And lucky me — I was cast as the cranky old prof! (Good thing the producers are going against typecasting.) Happily, Ms. Brugger, who accompanied me to the shoot, was given a few lines to hurl at the camera, so I hope her day was as satisfying.

As I've posted previously, Invasion of the Killer Cicadas is the newest horror offering from independent filmmakers Mat and Myron Smith, of Martinsville, VA. Just over a year ago, I made a brief appearance in their first venture, Young Blood: Evil Intentions, which was a horrifically funny production about vampire kids. This time around, the horror gets BIG, and the giant cicadas may be just the beginning — according to the professor, "Zis vill be ze beginning of ze end!"

The movie has been in production for several months, and there are still a few scenes left to film before the project is wrapped up. The script promises to offer some hysterical surprises... as I got to see first-hand. I know my anticipation is at fever pitch, as yours should be. In the meantime, why not enjoy some roasted cicadas as a snack?