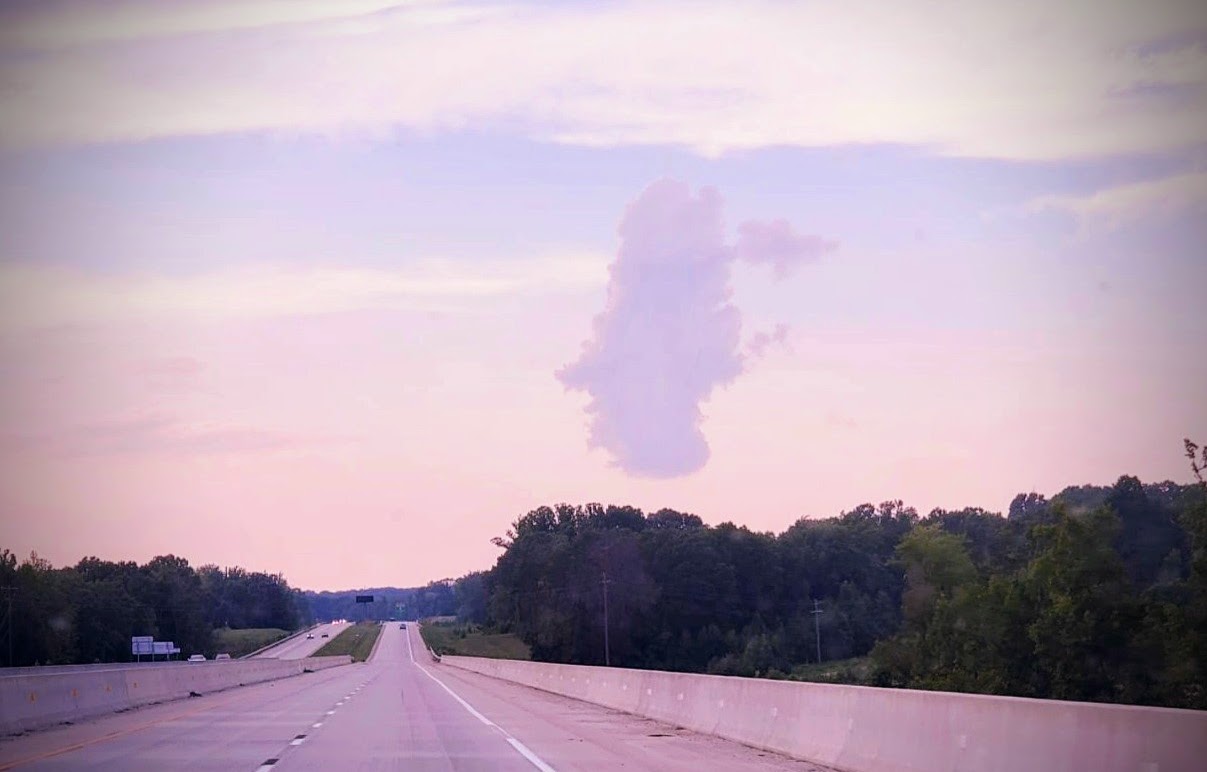 The camera lens rarely conveys the scale of the interesting things that often appear in the sky. The other day, on the way home from Ms. B.'s house, this lone, very tall cloud came drifting into view. You'd never know it from the pic, but it appeared massive, its vertical contours distinctive against the horizontal bands of clouds behind it. It struck both Ms. B. and I as worthy of a photo, at least.

If last week was a heavy-moving fest, this week was attempting to put things to right inside Casa de Rodan (oh yeah, it's still gonna be Casa de Rodan even if Brugger and her attendant felines are now permanent residents). If anything, it seems as though the more we work and organize, the more the house succumbs to disorder. I know this is kind of the way of things, but two full households merging into one poses unique challenges — as opposed to young newlyweds building things up for the first time, or divorcees arranging new domiciles in place of the old. I'm sure things will eventually come together, but right now, the only word to describe home is Chaos, with a capital C.

Now that the one-year anniversary of Mum's passing has past, I am having to begin the accounting phase of the estate, which poses unique challenges for a soul whose experience with accounting has never been harmonious.

A nice upside is that the office has reverted to Summer Hours, meaning that on Fridays, we only have to work half days, without making up any time. Love that!

And at Pleasant Hill in Martinsville — it's tree-clobberin' time. One of the old cedar trees that had been next to the back stairway since I was a kid had begun leaning damn near to the point of collapse, so I had to have it taken down. Hated that, since it offered so much nice shade, but if it had fallen, the damage might have been severe. Kinda sad, though.

Anyhoo, till next time around.... toodles.

Posted by Stephen Mark Rainey at 4:58 PM No comments: 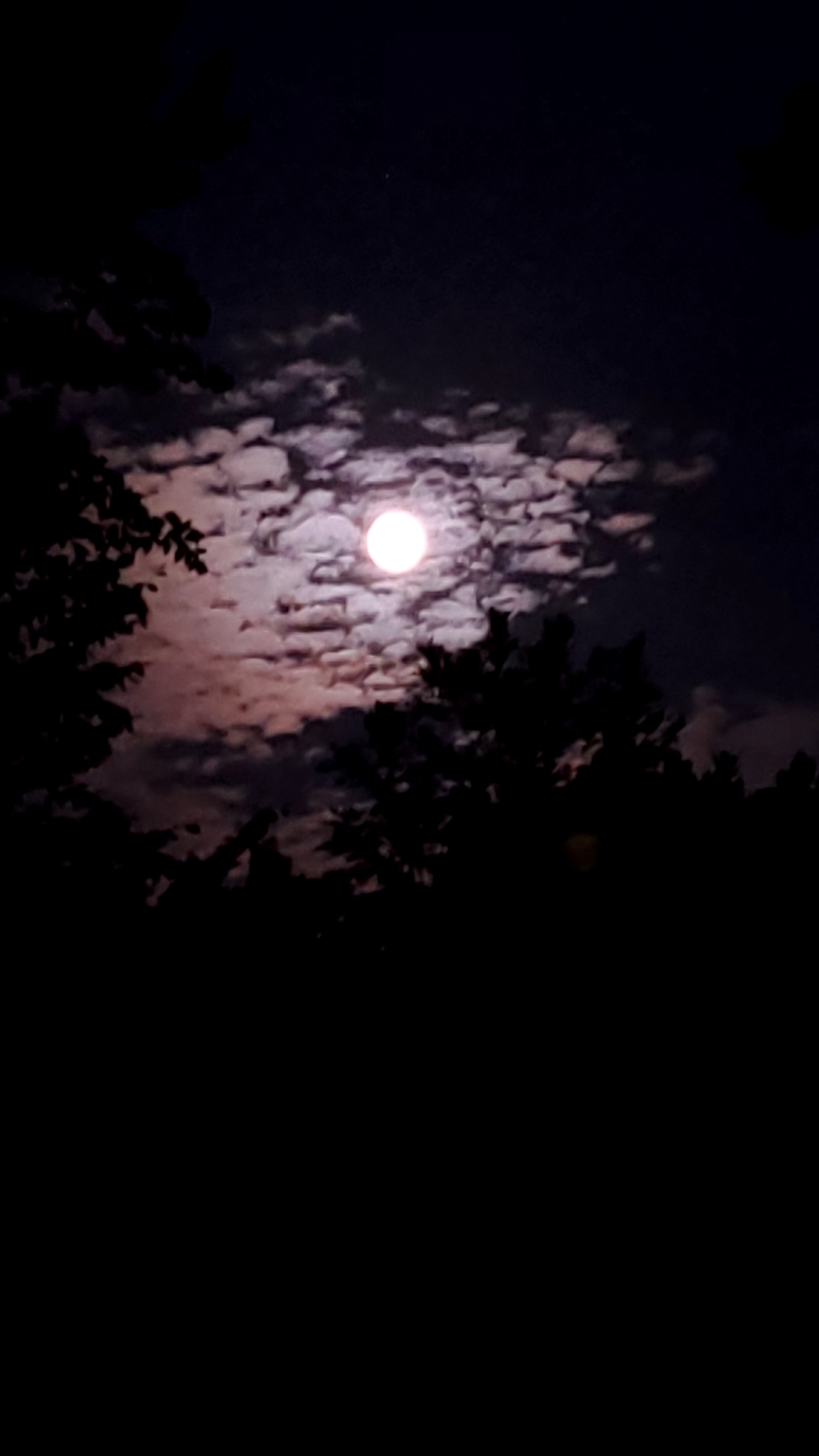 With the majority of the renovations at Casa de Rodan more or less completed, Ms. B. and I officially merged households this weekend. For days, we have been hauling her belongings over with a truck borrowed from our friends Terry & Beth, steadily filling the house damn near to its bursting point. Yesterday was the toughest day, with multiple trips to pack up and bring over her heaviest items of furniture. At the end of it all, the four of us rewarded ourselves with wine and yummies from Yummy Hibachi delivered by Doordash.
I had gone up to Martinsville on Friday to store a bunch of stuff for which there is no space here and to consult with a tree specialist about a big-ass tree that is perilously close to falling on Pleasant Hill. That done, I had a mostly mellow evening. Before I retired for the night, the late-rising full moon treated me to something of a spectacle. I don't believe I've ever seen a moon so big, bright, and vivid, surrounded by clouds that glowed red, pink, and purple. I took a good many photos from the front yard, but as is generally the case, my phone camera was up to capturing only the vaguest suggestion of the brilliant display.
Today, I took a brief respite from the rigors and went geocaching in Apex with friend Old Rob (a.k.a. Old Rob). We got in about three miles of hiking and snagged ten or so caches. It got pretty hot out on the trail, but it wasn't as bad as the past few days — nor as bad as the coming week's heat wave promises to be. Anyhoo, tomorrow, it's back to work as usual and the long process of unpacking, consolidating, and discarding. And dealing with accounting for Mom's estate.
I is tired. Here's a few shots from Apex Lake. 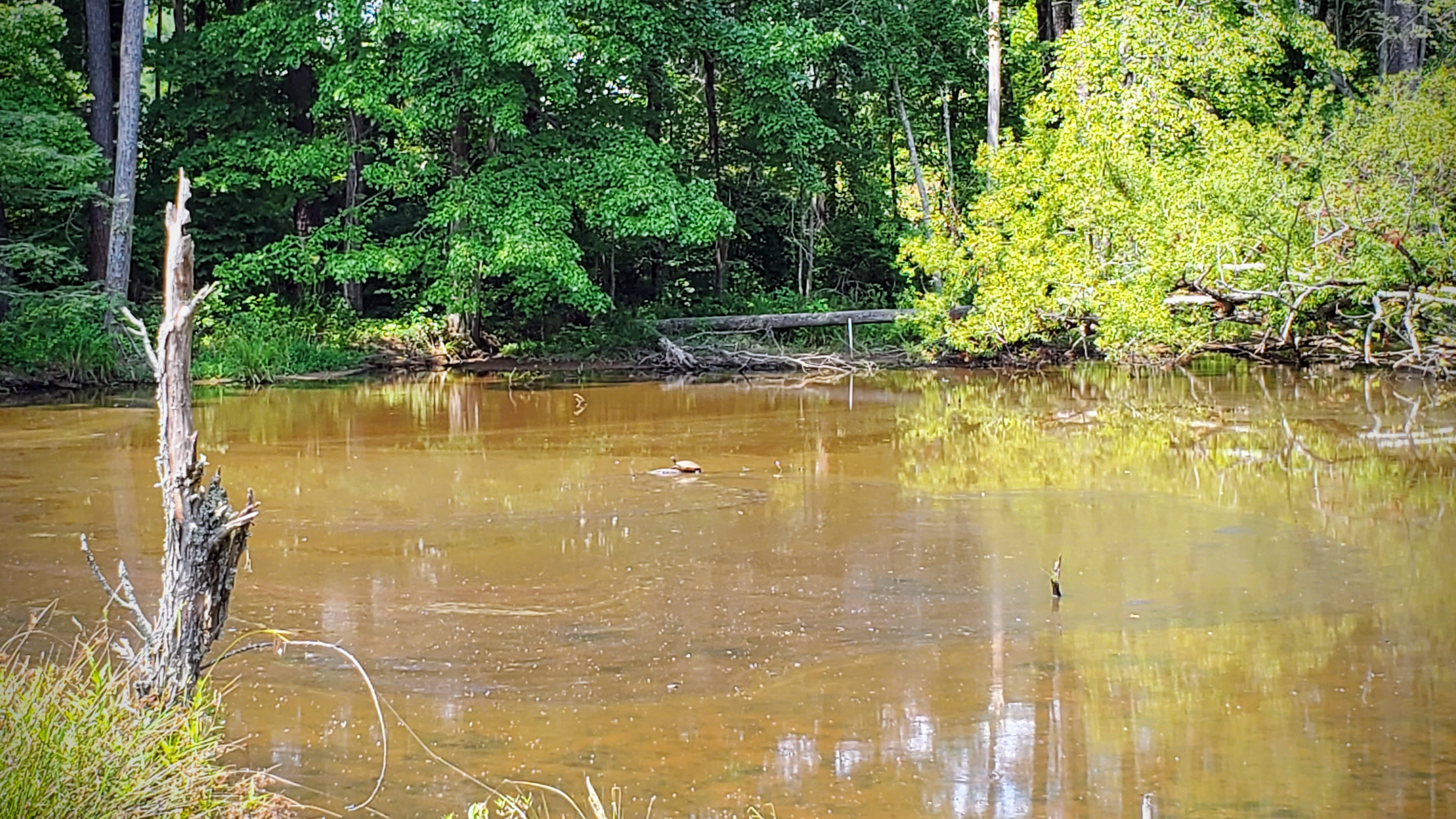 Posted by Stephen Mark Rainey at 10:41 PM No comments:

I have reserved a space at the Martinsville Oktoberfest, coming up on October 2. I'll be bringing plenty of copies of my Ameri-Scares novels (West Virginia: Lair of the Mothman, Michigan: The Dragon of Lake Superior, and Ohio: Fear the Grassman!), my novelization of  The Smith Brothers’ movie Young Blood (which was filmed in Martinsville), some of my Dark Shadows audio dramas, as well as The Monarchs, Blue Devil Island, Other Gods, and more.
I figured I’d put together an author banner to slap on the booth canopy, so I came up with the design you see above. I’ve requested a booth adjacent to authors Stephen H. Provost & Samaire Wynne, which I hope will actually happen.
If you’re anywhere in the southwestern Virginia area, I hope you’ll come check out the Oktoberfest — it’s always great fun — and stop by to support your local authors. We’d love to see you.
Posted by Stephen Mark Rainey at 3:02 PM No comments: 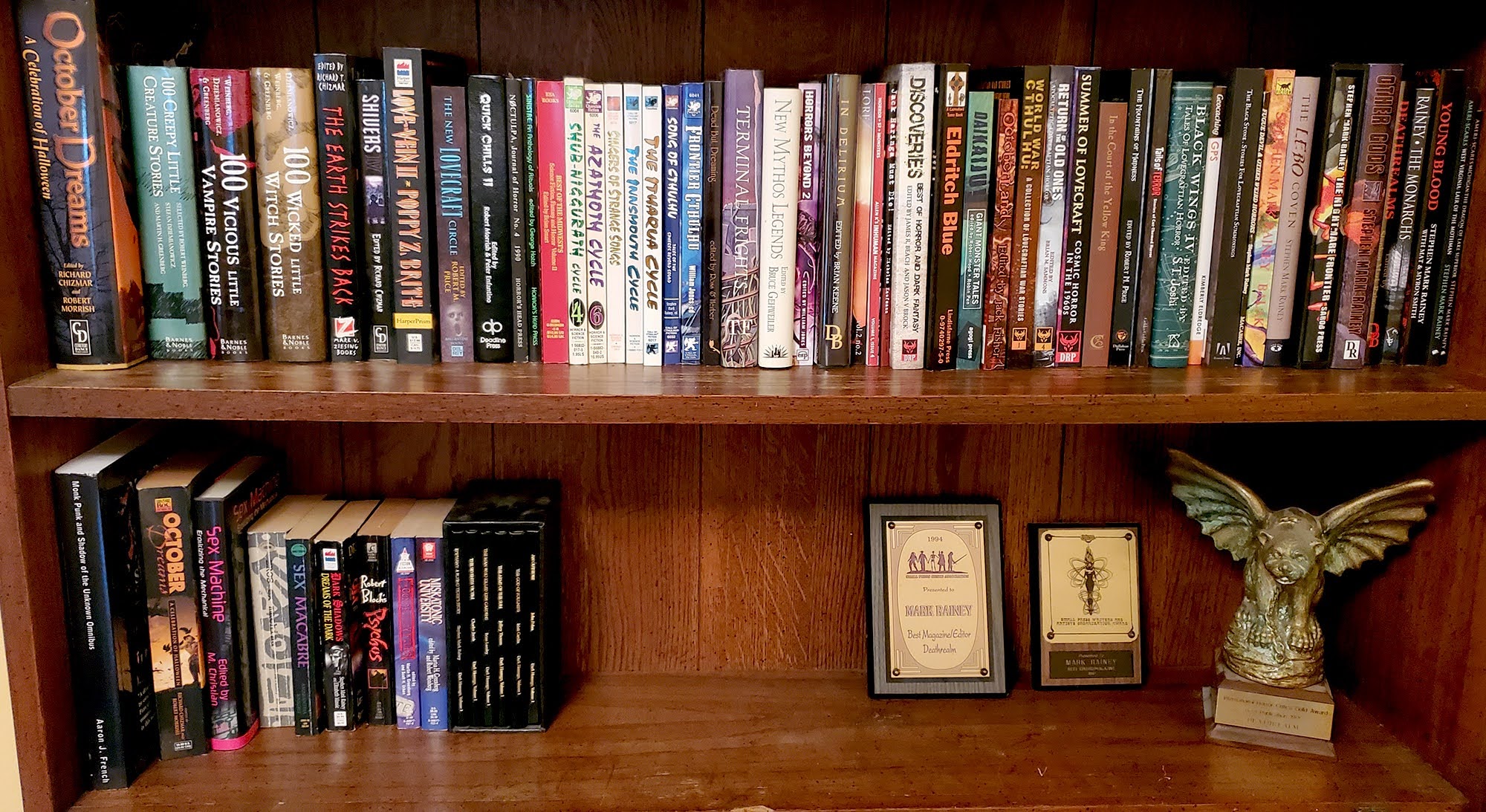 With the major house renovation slowly wrapping up, I’m starting to unpack all the shit that’s been stowed in boxes for several weeks. I figured I’d take this opportunity to put my own books, as well as anthologies that include my work, together on the shelves in my office; something I’ve never really done before. There’s another couple dozen more books to dig up, and the hundred or so magazines featuring my short fiction will have to find a different home. Looking at this, I am forced to admit that, after 30-some years, my plan to become a rich and famous author overnight was a failure.
The plaques and critter are awards from the Deathrealm days. Those are happy things.
Posted by Stephen Mark Rainey at 2:39 PM 1 comment:

Ride on the Fright Train 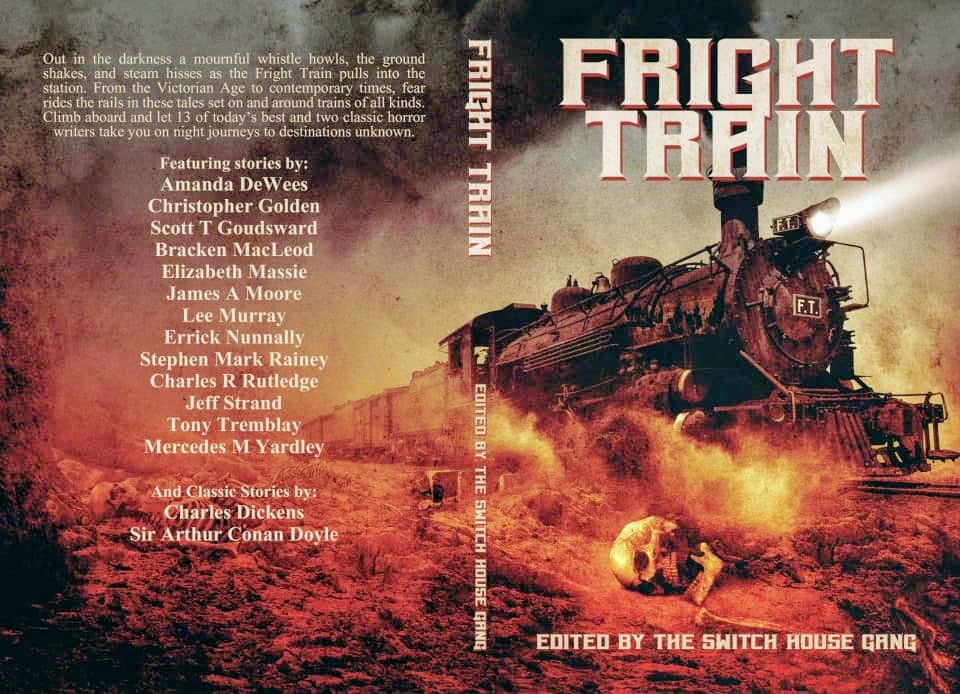 Here is the cover to Haverhill House’s upcoming anthology, Fright Train, which features my new short story, “Country of the Snake.” The art by Makio Murakami is absolute dynamite; at least, I think so. I hope you do too.

The Switch House Gang consists of editors Charles Rutledge, Scott Goudsward, John McIlveen, and Tony Tremblay. Look for the anthology in October. I will post updates as they are available. Back in high school, inspired by my love of miniature sets in the monster movies of the day, I constructed a model city of cardboard and miscellaneous scrap material on a roughly 3' x 4' section of drywall. I made all kinds of buildings, tiny cars, telephone poles (out of broom straw), electrical towers (also of broom straw), road signs...all manner of details in tiny scale. I owned a few custom-made monster figures — Godzilla, Rodan, Angilas, and Damiron (a critter from one of my early short stories, titled "Night of the Firebeast") made by my friend Bill Gudmundson, and the city made a great display setting. At one point, I caught a large praying mantis, which I set loose in the miniature streets. It seems like I took some photos at the time, but if I did, they are apparently long gone.

For my age and skill level, the mini metropolis was a reasonably accomplished effort, but it wasn't long before I found it wanting. So I set it on fire. That part was fun, and I decided that, someday, I'd devote time and energy to constructing a new, far superior miniature city. 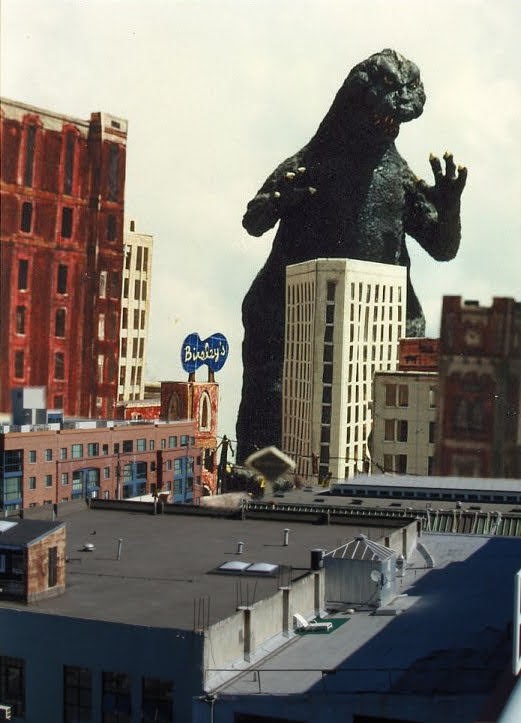 Well, it didn't happen right away. Almost twenty years later — 1992, to be exact — during an extended hiatus for Deathrealm magazine (a result of being laid off from my job), I found myself with more time than money. So, between job hunting and writing fiction (I also wrote my first novel, Balak, during that period), I set to work constructing a new miniature city. This one was smaller than the original — I built it on a 2.5-foot square of heavy cardboard — but considerably more elaborate. I planned it meticulously, designed fairly complex buildings, many with semi-detailed interiors visible through windows made of acetate sheets. There were tiny cars, trucks, parking meters, traffic lights, even wires strung from the myriad broom straw power poles. I used many of the same type of materials as the original little city — cardboard, bristol board, broom straw, plaster of Paris, faux foliage from hobby shops... any kind of scrap I could turn into miniature city features. I spent most of year on the project. And looking back, it turned out to be a pretty fair piece of work. I displayed it proudly for a long, long time — often with one or more daikaiju figures towering over its streets and buildings.

Over the years, though, the delicate structures began to deteriorate. Roofs occasionally collapsed, walls came apart, signs fell... and layers of dust accumulated two cars deep in places. It truly looked like the setting of some low-budget post-apocalyptic film.

And now, with Brugger moving in, space at a premium, and massive remodeling happening at Casa de Rodan, it just seemed like the old city had gone too far past its prime. So, last night, after a long bout with making room for new flooring throughout the house, Brugger and I took the old thing out back and set the match to it.

I have to admit it was kind of tough letting go, considering how much time, effort, and creativity I had put into it, but at least there are pics. And the conflagration is documented on video. Here it is in all its fiery splendor.

Posted by Stephen Mark Rainey at 5:38 PM No comments: