I Am the Pretty Thing That Ate the House

Well, maybe not the whole house, but damn near. There was no shortage of Thanksgiving Day feasting at the House of Rainey—with a worthy Black Friday follow-up. Since Mum is no longer able, for the past few years, Kimberly and I have been responsible for preparing our Thanksgiving Day vittles, and this year we scrounged up some mighty good ones. Dead bird (big), dressing (lots), smashed taters (this means something!), corn (garmonbozia), green beans (greenie meanies), pumpkin pie (courtesy of Phred), wine, coffee... all making for some happy dining. For afters, there was napping for some and walkies for me. While there were, sadly, no nearby geocaches I hadn't already claimed, I hoofed it around Liberty Fair Mall hunting a passel of Munzees. I'm sure I walked off at least a couple of green beans. Not only that, later, Ms. B. and I took a long, after-dark walk around the old neighborhood, which was both healthy and reasonably bone-chilling.

Once back at Mum's, Kimberly and I settled in to watch I Am the Pretty Thing That Lives in the House, a Netflix-produced ghost story about a young hospice nurse (Ruth Wilson) assigned to care for a former horror author (Paula Prentiss) in an old New England mansion. It turned out creepy enough, though so sedate in its pacing I had to struggle to fend off tryptophan-induced narcolepsy. Somehow, I persevered. After the filum was over, we put on the first couple of episodes of Stranger Things, season 1, which revived me. I had recently watched the entire run, but Ms. B. had not, and it was actually a treat to return to the series.

This morning, Ms. B. and I began the day with breakfast at The Daily Grind (home of the regular Songwriter Showcase events in which I have participated) and then set out for Villa Appalaccia winery on the Blue Ridge Parkway, where we met Terry & Beth (who rate among our select number of friends who appear to show little or no interest in burying Ms. B. and me in remote, hidden graves) for an afternoon of adventures in the land of oenophilia. After conquering this particular venue, we moved on to Chateau Morrisette, a short distance down the Parkway, for dinner. I quite enjoyed a wonderfully prepared and presented plate of Osso Buco; Kimberly and Beth both tore into some deceased poultry; but sadly, Terry was not taken with his portion of beef (we think it might have come from a zombie cow). Happily, the restaurant did their best to make things right, and I hope we can soon make a return trip we will all enjoy.

On our arrival back in Greensboro, we discovered a whole neighborhood a mile or so up the road from home cordoned off by numerous police cars and yellow tape. Dunno what the show is, but I hope it's only playing over there.

I think the tryptophans are about to stage a coup. I sleep now. Go away.

Posted by Stephen Mark Rainey at 11:39 PM No comments:


I have a confession to make. Back in my college days, I was a suave, refined gentleman, yet, over the years, I somehow seem to have gone off the rails.

I was a freshman, only recently arrived at college, and there was this lovely young lady named Lisa I often saw around campus. I was desperate to meet her and introduce myself, but being a total stranger and all, I couldn't figure out a good way to say "Hi" to her. One afternoon, my roommate Charlie and I were sitting on the brick wall outside the cafeteria, and Lisa came walking by along with a couple of friends. Charlie nudged me and said, "Well, here's your chance."

God awmighty, you should've seen me—I was so damned suave you would never believe it. Getting a flash of inspiration, I picked up my spiral notebook and chucked it at her. Without missing a beat, I hopped off the wall, went to her, picked up my notebook, which had hit her in the back, smiled my suavest smile, and said, "Hi, I'm Mark."

I found myself facing the coldest of cold stares. "Yeah?"

Lisa turned around with her friends, heads all shaking, walked off, and from then on, they all knew Mark. For reasons I have never quite fathomed, she did not fall immediately in love with me.

But hey, I was so, so suave. I just don't know if I can be that suave ever again.
Posted by Stephen Mark Rainey at 6:03 PM No comments: 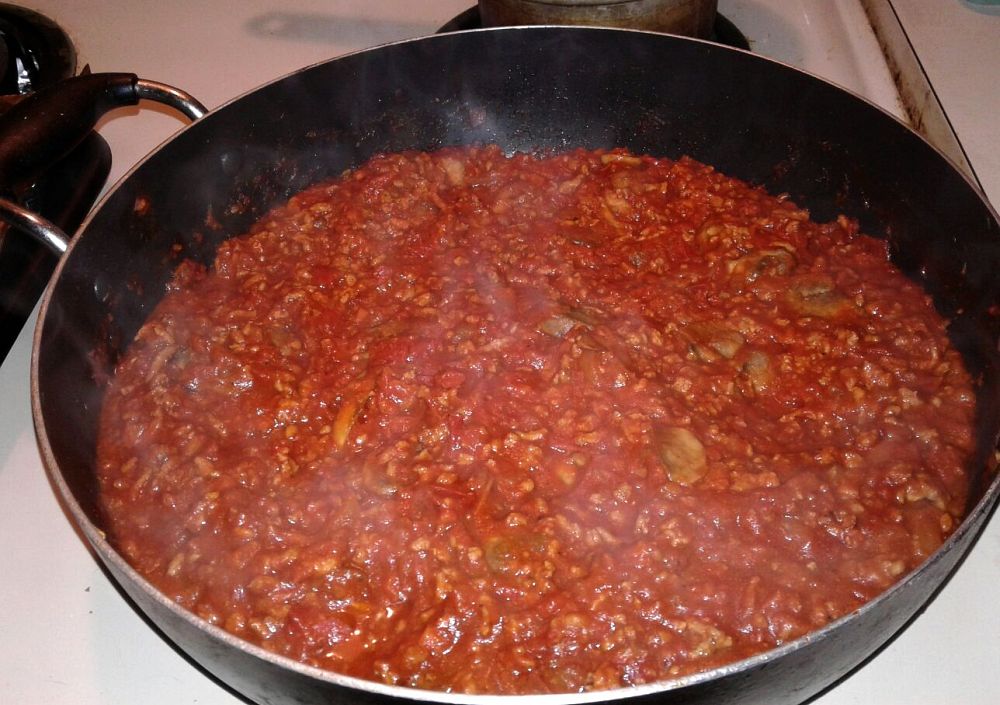 It's recipe time again! This one is not killer spicy like most of my concoctions; it's a bit more true to its Italian heritage, with some Damned improvising. It's all kinds of happy, though, so feel free to try your own version. This recipe will serve four. To facilitate the cooking, I recommend using two skillets—I used my large deep Teflon-coated skillet and medium cast iron skillet. While most recipes call for dry white wine, I recommend dry vermouth for a little extra oompf.

Serve over the pasta of your choice. I opted for Rigatoni, based on the recommendations of various Bolognese recipes. Salt and pepper to taste. I don't know whether Damned Rodan's Beast Bolognese will make you start speaking Italian, but it ought to fix you up when that craving comes on.

Delicioso.
Posted by Stephen Mark Rainey at 9:42 PM No comments:

After a months-long dry spell on the geocaching front, the past three weekends have been mighty satisfying. A couple of weeks back, it was the Gettysburg trip for Kimberly and me (see "Sojourn at Gettysburg," Oct. 30, 2017); last weekend, Raleigh-Durham with Old Rob, Suntigres (a.k.a. Bridget), and BigG7777 (a.k.a. Gerry); yesterday, some trail caching in Greensboro with Cupdaisy (a.k.a. Debbie), and today, a nice outing in Winston-Salem with Old Rob. We started out this morning with a lucky first-to-find in Kernersville, headed to Salem Lake for a few miles of trail hiking and caching, then trucked ourselves over to Salem Quarry Park to seek a relatively new multi. Some fall color made for a brighter hike on an overcast, chilly morning at Salem Lake. By the time we finished there, we had put in a good three miles on the trail and had five more caches under our belts. The air had finally begun to warm a bit, but when we hit the quarry, the wind picked up and the temperature dipped dramatically.

I'd not been to the quarry before. It was more extensive than I expected, bigger than most of the others I've seen in this area. There's a nice observation deck that extends out over the edge of the quarry, with an ironwork floor that allows you to see the vast, empty space directly beneath you. Several miles to the north, you can see the Winston-Salem skyline, today half-hidden by the overcast skies. The multi-cache here was our favorite of the day, requiring us to gather information from the around the overlook to calculate the coordinates to the final stage, which was a big old ammo box.

Otherwise, have been busy with writing, both new stuff and re-working some old. A nice party at Kimberly's last night starring geocachers and oenophiles—always a good combination.

Been enjoying some Stranger Things, so I'm going to work in another episode or two this evening.

Posted by Stephen Mark Rainey at 5:43 PM No comments: