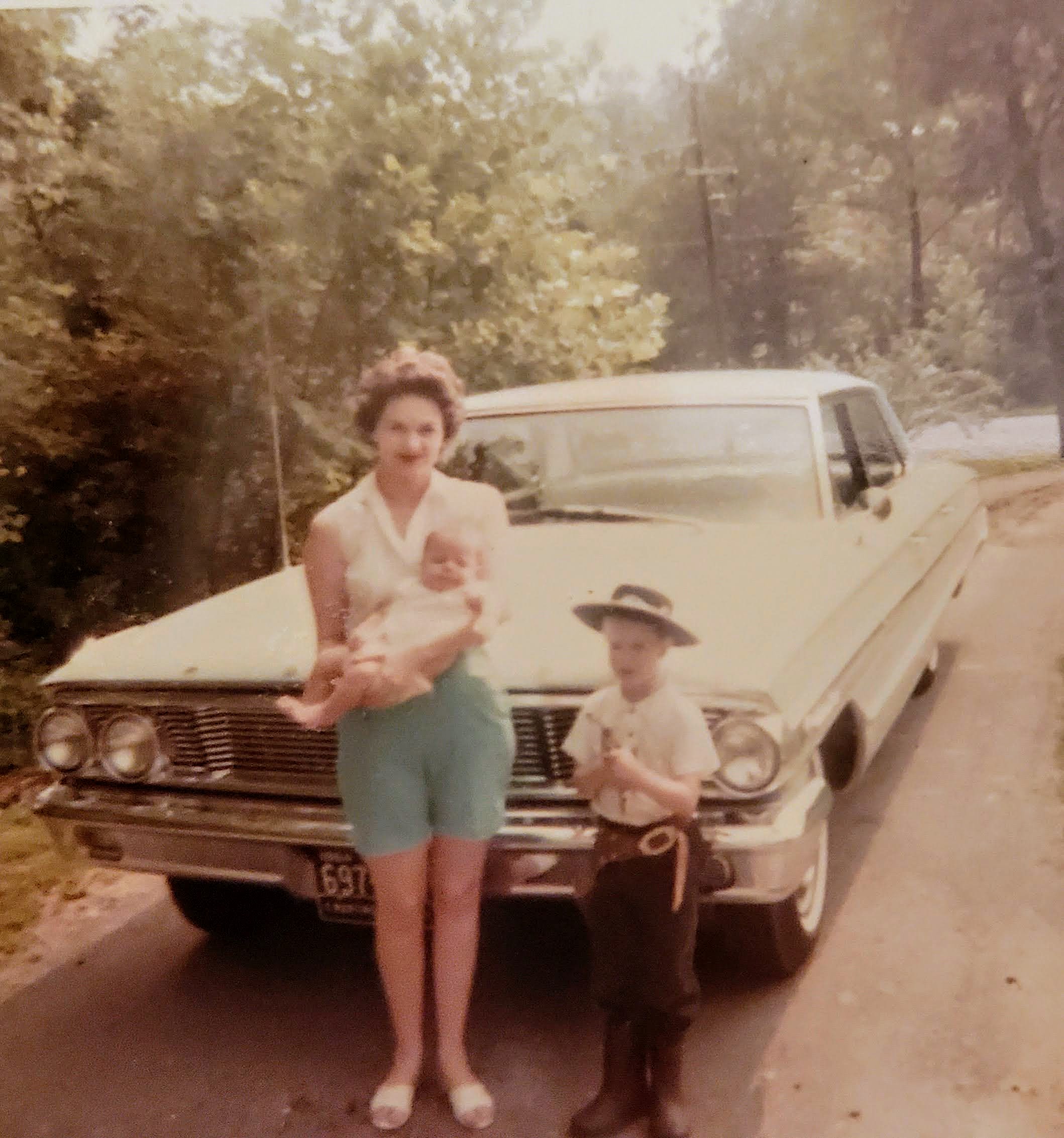 Today is Brugger’s birthday — which we celebrated at Fleming’s Steakhouse & Wine Bar this past week with friends Stephen and Samaire — and it kind of snuck up on me that it’s also Mother’s Day. Above, you see Mum holding Phred, guarded by a weird little cowpoke, circa 1964. Hard to believe that, of the family I grew up with, I am the last survivor. Never would I have believed such a thing. This week, I’ve reflected a lot on a sometimes tumultuous but essentially rich life. I miss my mom, my dad, and my brother more than words can ever express. 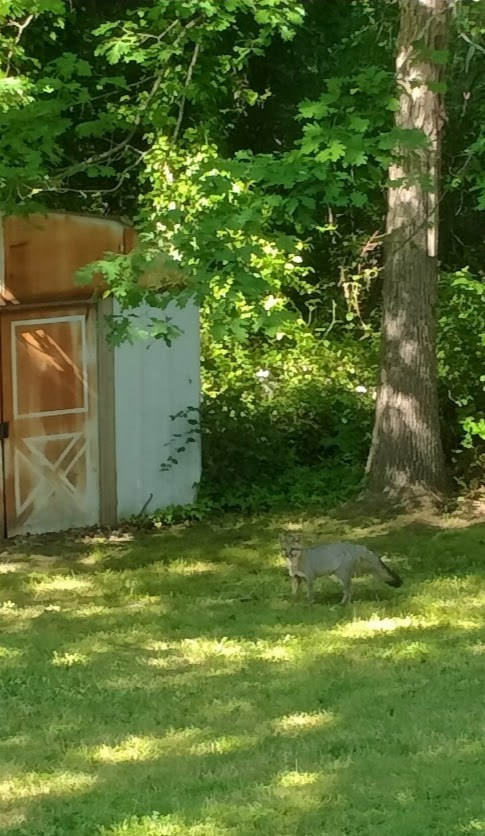 Although, overall, this week hardly seemed much out of the ordinary, it offered a number of unprecedented and/or unusual moments. We began the week with my birthday. Sixty-two great big ’uns, that’s how many of these particular days I have weathered. For my birthday, I bought myself a Godzilla figure — something I’ve done only once in the past four decades. It seemed the thing to do at the time. So, in the same spirit, for Brugger’s birthday, I bought myself a MechaGodzilla (Kiryu) figure. Lord knows, I can’t afford for this kind of thing to become a habit, but at least the MechaGodzilla was pretty much free, due to having all kinds of bonus points to spend at Amazon.com.
Early in the week, a young gray fox came around to visit. I have, on occasion, encountered foxes in the wild, but never one around these parts. It was a lovely critter to see, yet I fear it came over to my yard because the fuckers down the way are cutting down all the woods to make way for yet another goddamn superfluous subdivision. I’m so sick of these shitheads cutting down every inch of green space in this town I could fucking spit. It’s ugly, harmful, disgraceful. You might be forgiven for believing I hold strong opinions on this subject. 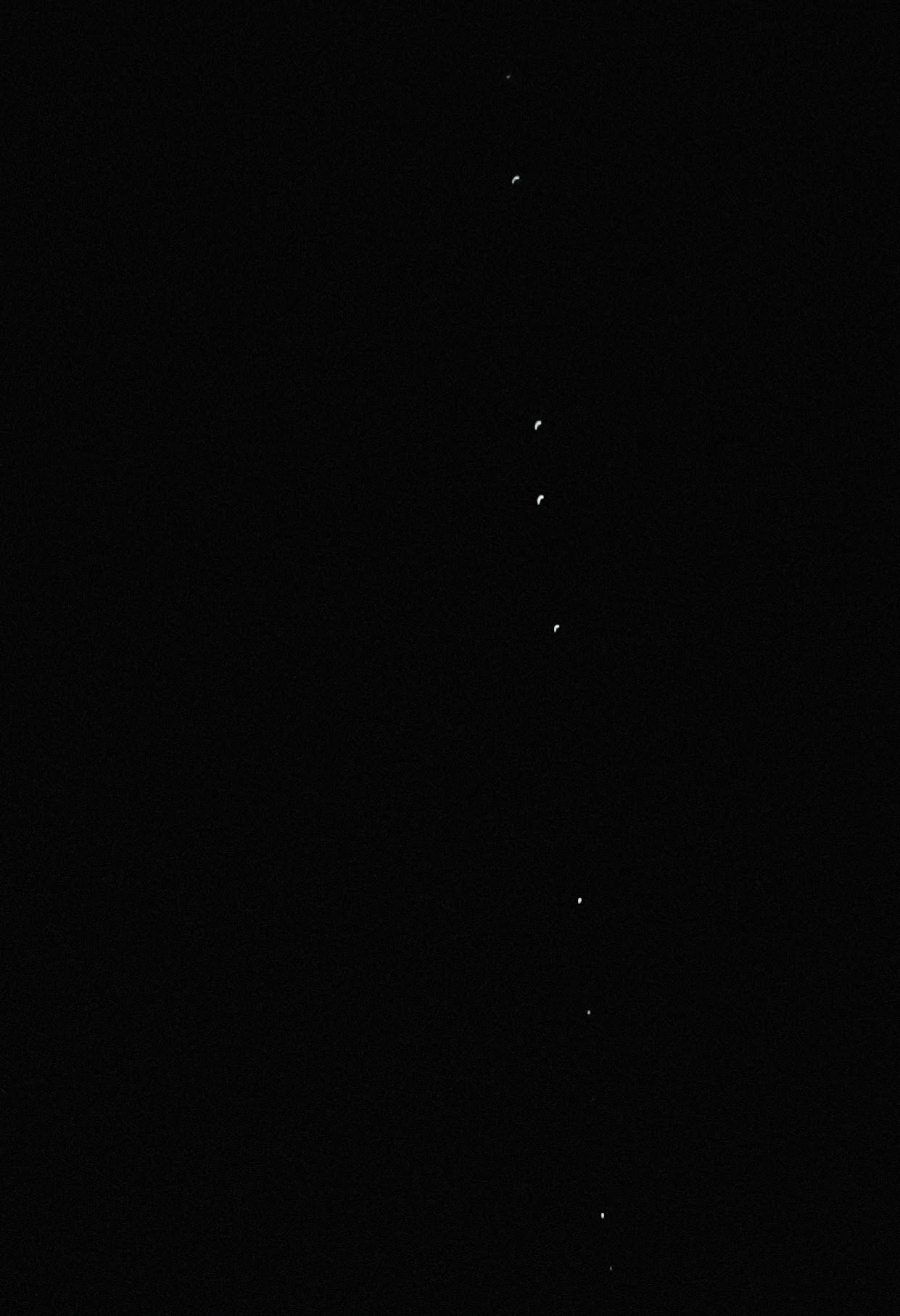 On a far more intriguing note, last night, Brugger and I spent a most enjoyable evening at the home of our friends (and geocaching buddies) Tom (a.k.a. Skyhawk63) and Linda (a.k.a. Punkins19). We did, believe it or not, partake of some wine, and our hosts provided a superb kabob dinner, followed by (fresh) strawberry shortcake and an intriguing dessert wine. We had kicked back to relax around their newly built firepit when Linda noticed an unknown phenomenon in the sky: a seemingly endless train of lights in the sky, moving at high speed directly above our heads. At first, we though perhaps it was the wreckage of the Chinese rocket that had been predicted to crash to earth last night; these objects, however, appeared far too uniform and perfectly spaced to be wreckage. And soon, we noticed a perpendicular stream of lights farther south. Brugger immediately took to Google, and we discovered this was almost certainly SpaceX’s StarLink satellite train. Now, I tend to keep up with most such technological developments, but I confess that this one had completely eluded my attention. None of us had any inkling about the existence of such a thing. I found it a bit disappointing that this was not the long-awaited Martian invasion, but then, the odds against anything coming from Mars are a million to one, as the quote goes. Unfortunately, the video I took provided only a black sky and a lot of slightly alcohol-slurred exclamations from the group of eyewitnesses. Similarly, my photos (example above) convey the spectacle only slightly. Regardless, it was an unexpected and, at the time, exciting experience for the lot of us. 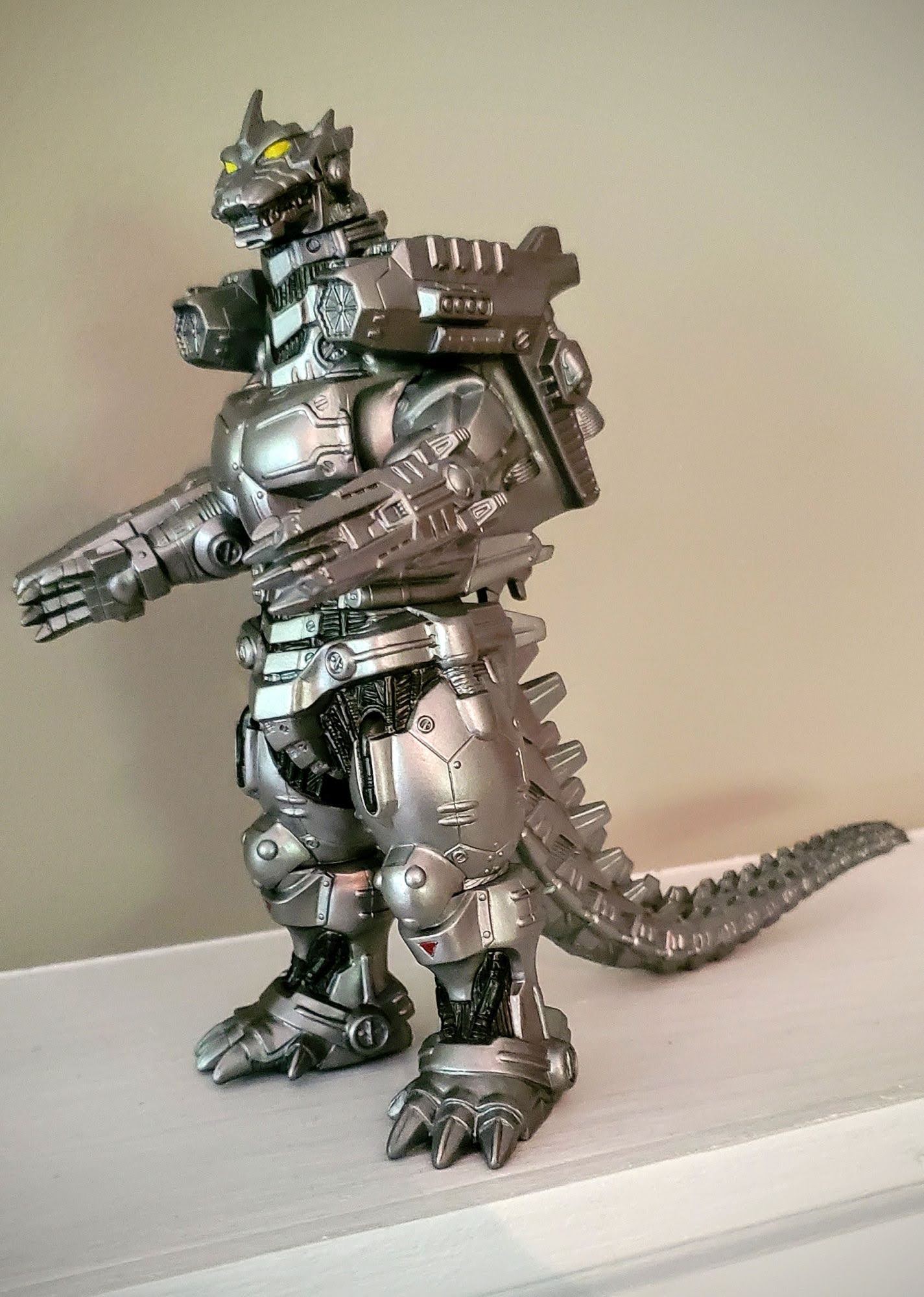 Comparatively, it may be far more prosaic, but the house renovation continues to progress slowly but surely. Early in the week, we had the downstairs rooms measured for new flooring and the deck stained, the latter courtesy of Carlos’ Paint Company (the same folks who did a bang-up job on our living room). I’ve put in several evenings on various interior projects, and Brugger and I worked most of the day yesterday, she prepping the downstairs bathroom for painting, I painting doors and trim and putting up new blinds.
Now, I can only hope my houseful of giant monsters don’t get loose and undo the labor and expense Brugger and I have put into all this.
I barely managed to touch Georgia: The Haunting of Tate’s Mill, my Ameri-Scares novel-in-progress, but I hope to get more time in on it this week. There’s still a mess of estate business to deal with too, so we shall see what we shall see. And that, I reckon, is that.

Posted by Stephen Mark Rainey at 6:06 PM No comments: 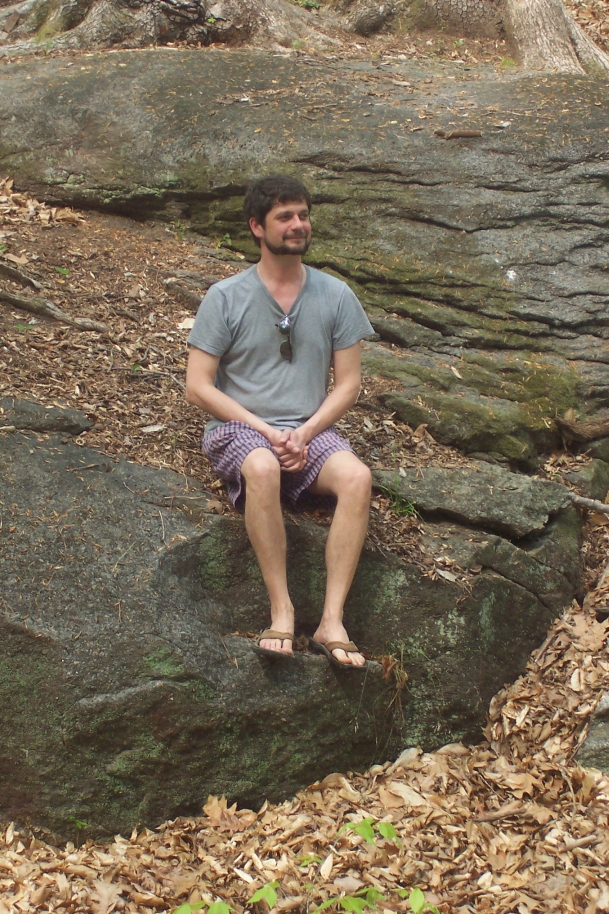 Today would have been brother Phred’s birthday — 57th, I believe. I found it gratifying to see many of his friends remembering the occasion on social media. I devoted some time to listening to his music, looking at old photos, and reflecting on our lives together.
For at least a fair portion of his Industrial Soldier days, Phred lived in the sticks outside of Blacksburg, VA, following four years and some change at Virginia Tech. Although I believe he wrote “Grass-a-Lot” while he was in college, probably dwelling on campus, he preferred remote, relatively isolated living, which is what his later residence outside of Blacksburg offered him. In the late 1980s, after moving back south from Chicago, I spent a considerable time with him out there in the sticks, and I rate those days as among the best we ever shared. “Grass-a-Lot,” for its youthful, mildly rebellious tone, could have been his musical banner during that period, not to mention the days and years that followed. The sentiment is one he and I have had in common. That sense of belonging to a place — even a time — is as powerful in me now as it was then, and hearing this particular song after something like three decades brings me around full circle, emotionally. Its power comes largely from a youthful perspective that speaks just as loudly to the old fart in at least some of us.
In those days, Phred’s vocals were raw and untamed, but the composition and musicianship, as with everything Industrial Soldier, more than stands up to critical listening.
You can check out “Grass-a-Lot” on Dropbox here.
Grass-a-Lot
©Phred Rainey, Industrial Soldier

Behind this fence we dig our trench
And grab our part of the land
We got here first, and here we are
And now get out of hand

It’s occupied, now we’re on our own
We’ll take it off the map
And place it here
Far as eyes can see

We could give the neighbors something to talk about
Perhaps they’ll make a law someday and make it safe to live loud
Are we far away?
Do we owe them any sleep?
Not today

They come from miles around to see if we are real
If the creeps are in our yard, we’ll down ’em
And bury them in the field
We know what's right and this is why we know what’s at stake
Our lives are here
To a bitter end

We could give the neighbors something to think about
Perhaps they’ll make a law someday and make it safe to live loud
Are we far away?
Do we owe them any sleep?
Not today

Inside the fence we raise our fists and grab our part of the land
We got here first and here we are
So get off our land
Truth to tell, we’re doing well in a place we can call our own
Our lives are here
Our grass is here

Posted by Stephen Mark Rainey at 9:09 PM No comments:

Today was this old man’s birthday, and as birthdays go, it proved right enjoyable. The entire weekend, though, whirled through so fast and hard it barely registered on my radar. Ms. B. missed the lot of it, for she was gone on a crafting retreat in Georgia. Poor thing, that Ms. B.
Friday after work, I headed to the old homestead in Martinsville, where I hosted a relatively mellow evening with friends/fellow writers Stephen Provost & Samaire Wynne. We sat out on the back deck with tiki torches burning, enjoying wine and snacks, until fairly late in the evening. On Saturday, I went straight down to Winston-Salem, where I spent most of the day cleaning out my brother’s house (now technically mine) in preparation to get it on the market as soon as it’s possible. That was a long, ugly job, but with ample help from Phred’s friend/executor Jane and my friends Terry & Beth, we emptied it of the vast majority of its contents. I did manage to snag a couple of geocaches for good measure.
Once back home, I found my former next-door neighbors Paul & Jamie hard at work on their house as they prepare it to be listed for sale soon as well. We partook of some fine beverages and, a bit later, ordered Mexican food from Luna’s, which we enjoyed on my front porch.
This morning, I met friends Old Rob (a.k.a. Old Rob), Diefenbaker (a.k.a. Scott), Fishdownthestair (a.k.a. Natalie), and Cupdaisy (a.k.a. Debbie, a.k.a. Bewilderbeest) in Historic Bethania, just north of Winston-Salem, for a day of the rigorous hiking and geocaching. We found some fun ones, didn’t find a frustrating one, met a friendly snake, and enjoyed a late lunch (a damned fine burger for me) at The Village Tavern in Reynolda Village. One cache, which turned out to be our favorite of the day, led us to what is surely the most massive (if not the tallest) sycamore tree I believe I have ever seen. And a big old thing it is, with numerous trunks, perched right on the edge of Muddy Creek. We clambered all over that thing, taking in the various views. Of course, we signed the cache log.
After caching, I had to make a last stop (for now...) at Phred’s house to grab a few things that wouldn’t fit in my car yesterday. I didn’t collapse from exhaustion when I got home, but I came about close as one might care to. I reckon that’s what happens when you are no longer on the younger side of old.
Rounding out the nice birthday, I received payment for a short story coming up in a new anthology from Dark Regions, and a contract for another one recently accepted for publication in another upcoming book. I will offer up a big “yay!” for both these things.
I sleep now. 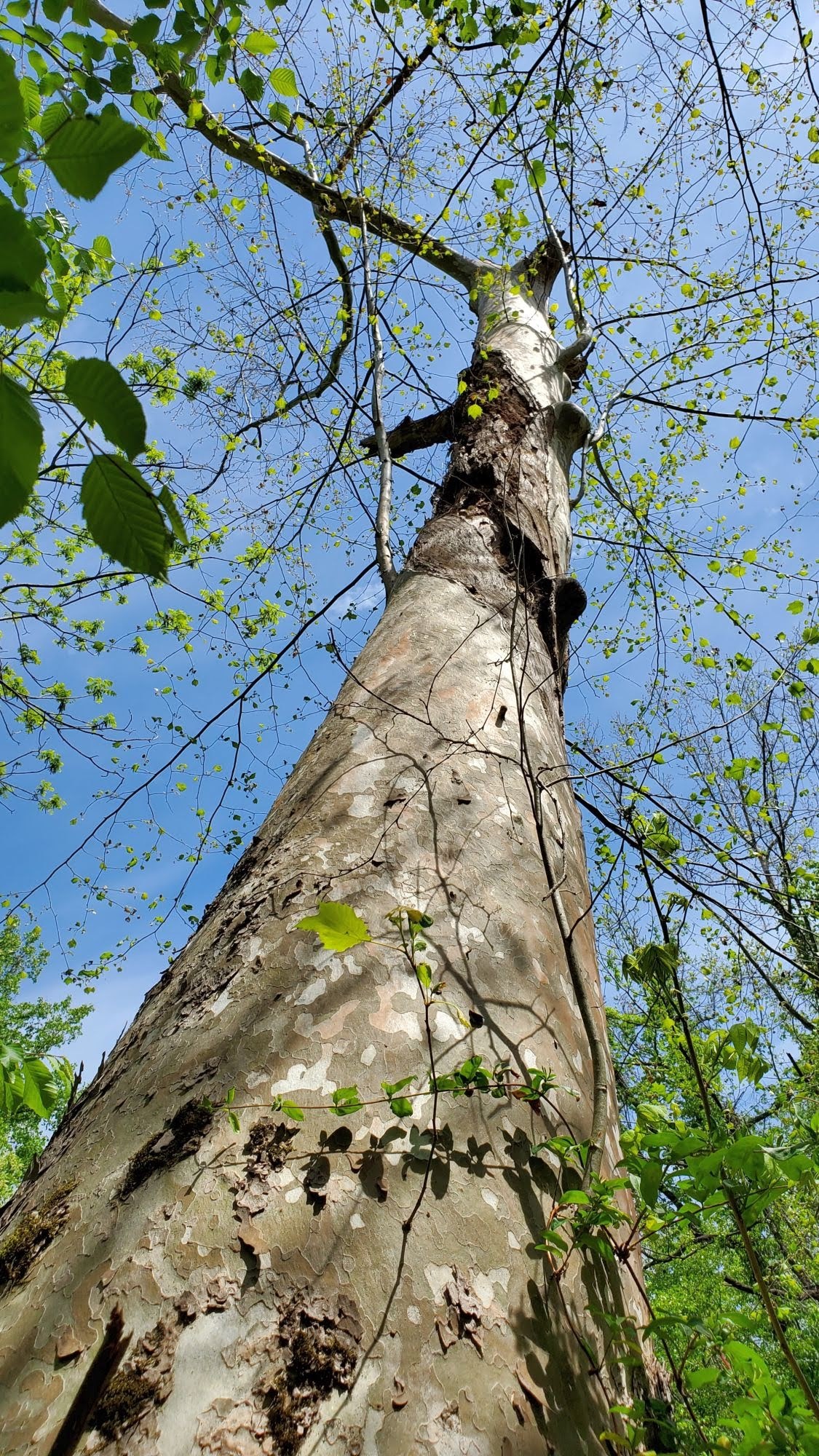 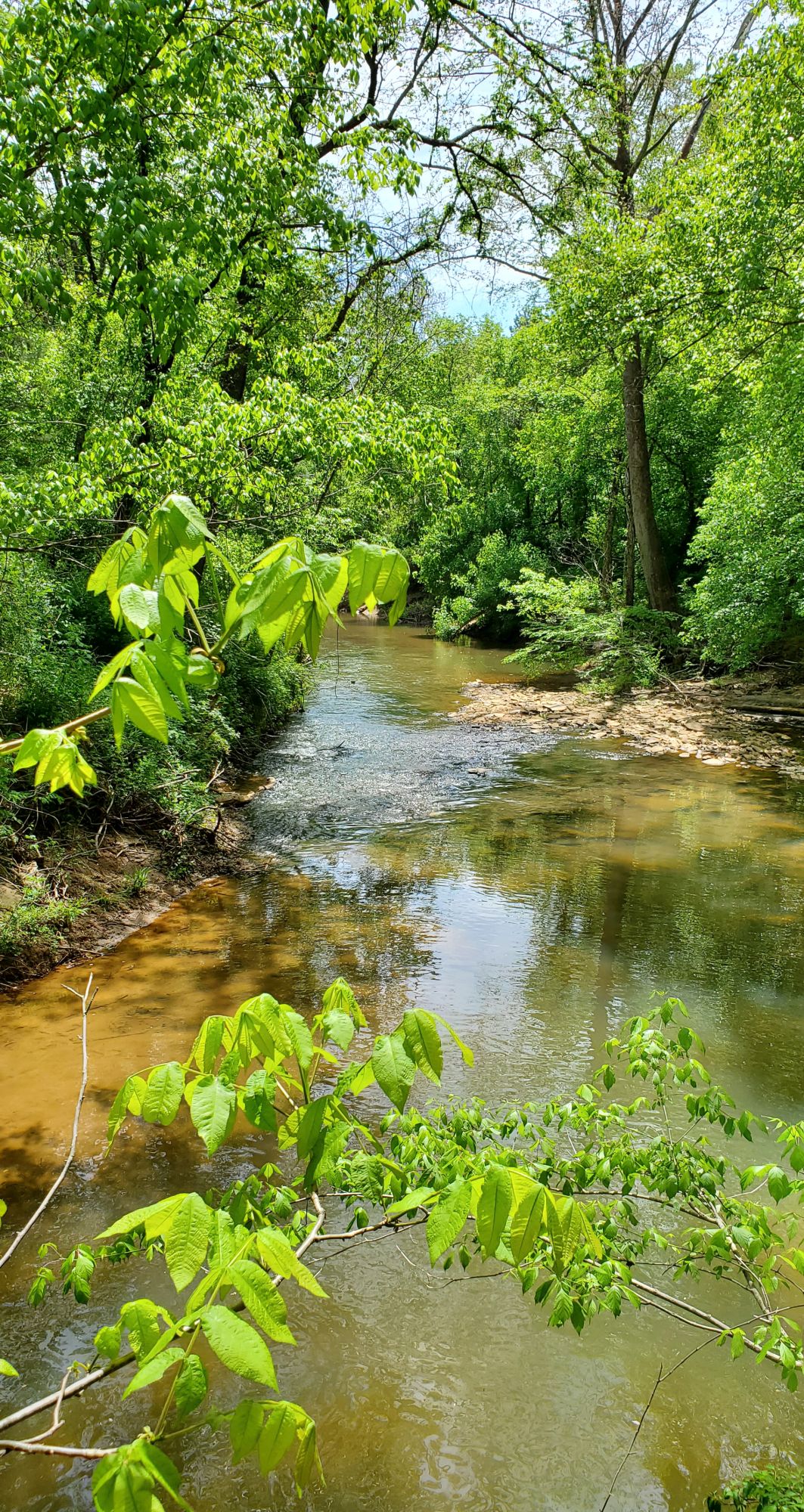 L) Looking up at one of Goliath's many trunks; R) view of Muddy Creek from Goliath
Posted by Stephen Mark Rainey at 11:29 PM No comments: