Actually, it's not terribly spooky, at least in daylight, but it sure does have some atmosphere. The new Fieldale Smith River Trail, just northwest of Martinsville, VA, has just become one of my favorite places anywhere. The grand opening of the new mile-plus stretch was yesterday, and today, I walked out to its end and back—twice. Oh yeah, a little sore. (But it's a good kind of sore.) Hid three new geocaches out there—a couple with spooky themes, since the sites overlook the old Koehler warehouse on the Smith River, which used to double as the Jaycees' haunted castle at Halloween. I got to work it several times during my teens and early twenties, designing some of the chambers of horrors and playing the roving monsters that scared the poop outa the patrons. Good times, those.

Now I figure if cachers are out yonder hunting and hear a bunch of eerie howling commencing, it's probably because they've disturbed the evil, hungry living dead that frequent the area. (Or maybe it's just somebody's dog. But who'd want to take the chance of finding out?)

Some of the biggest, oldest trees I've ever seen are out on that trail. Several islands parallel the banks (I hid a cache on one of them). And near the trail's end (at least until it is extended farther), I found what appears to be the place where old gas grills go to die. Yeah, for real; it was a clearing filled with several old gas grills (one of which was apparently used to cook golf balls—see photo below), some camping chairs, a fire pit, and a mason jar of what appeared to be peach moonshine (possibly older than I am).

So it was a really neat afternoon. Got in four-plus miles of hiking, found some caches, and planted a few. Plus the writer's instincts got a good workout. I foresee a new tale in the works in the very near future... 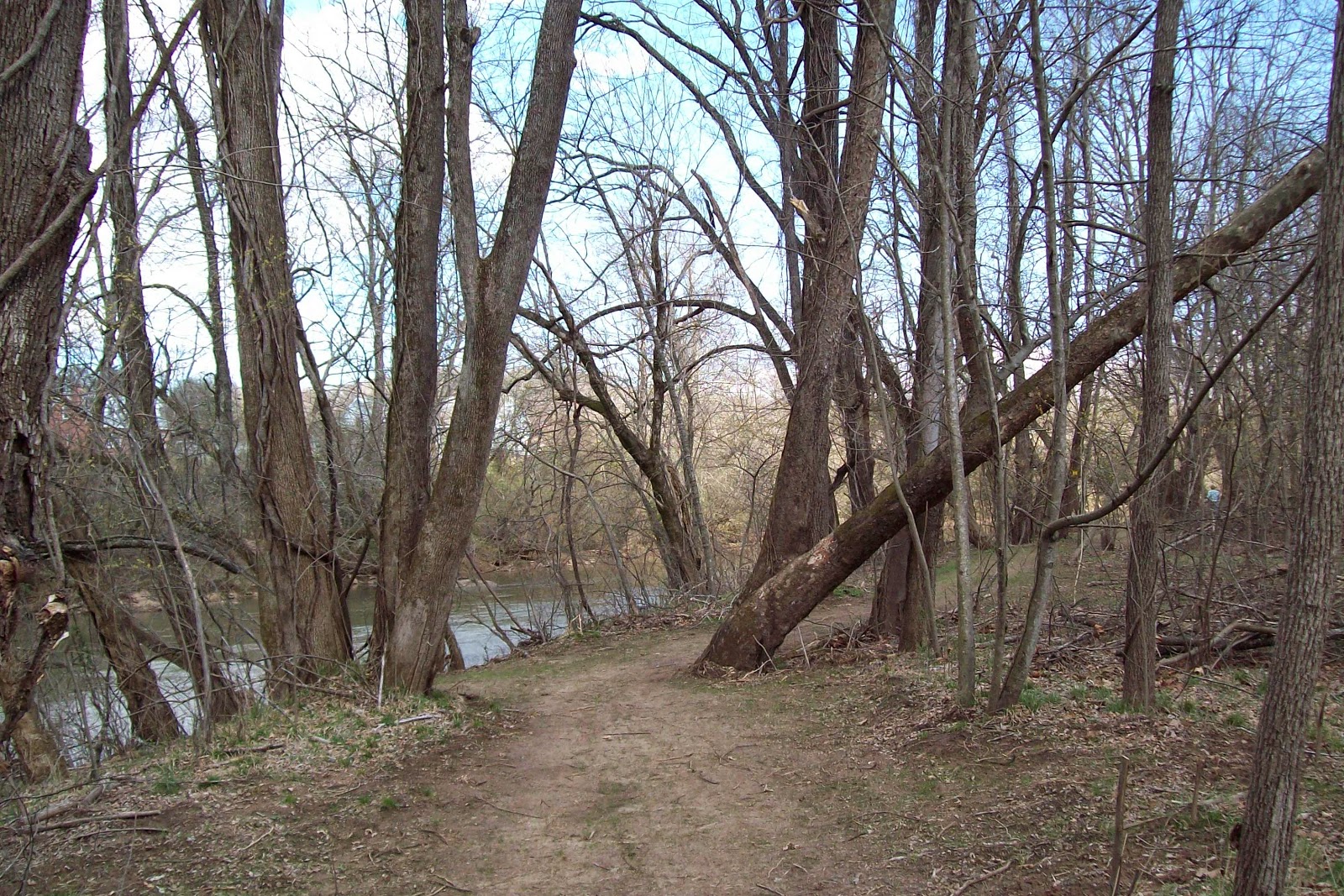 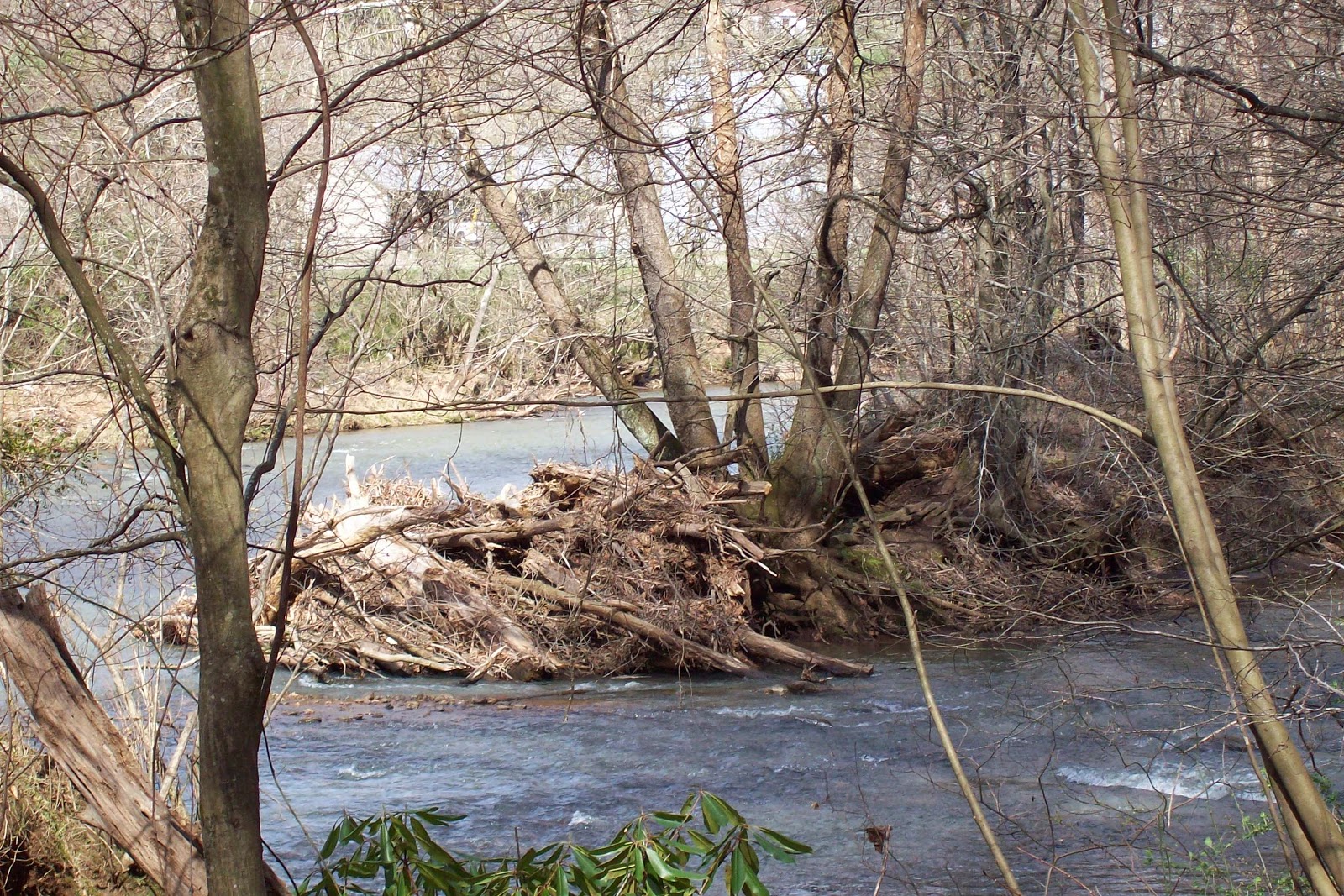 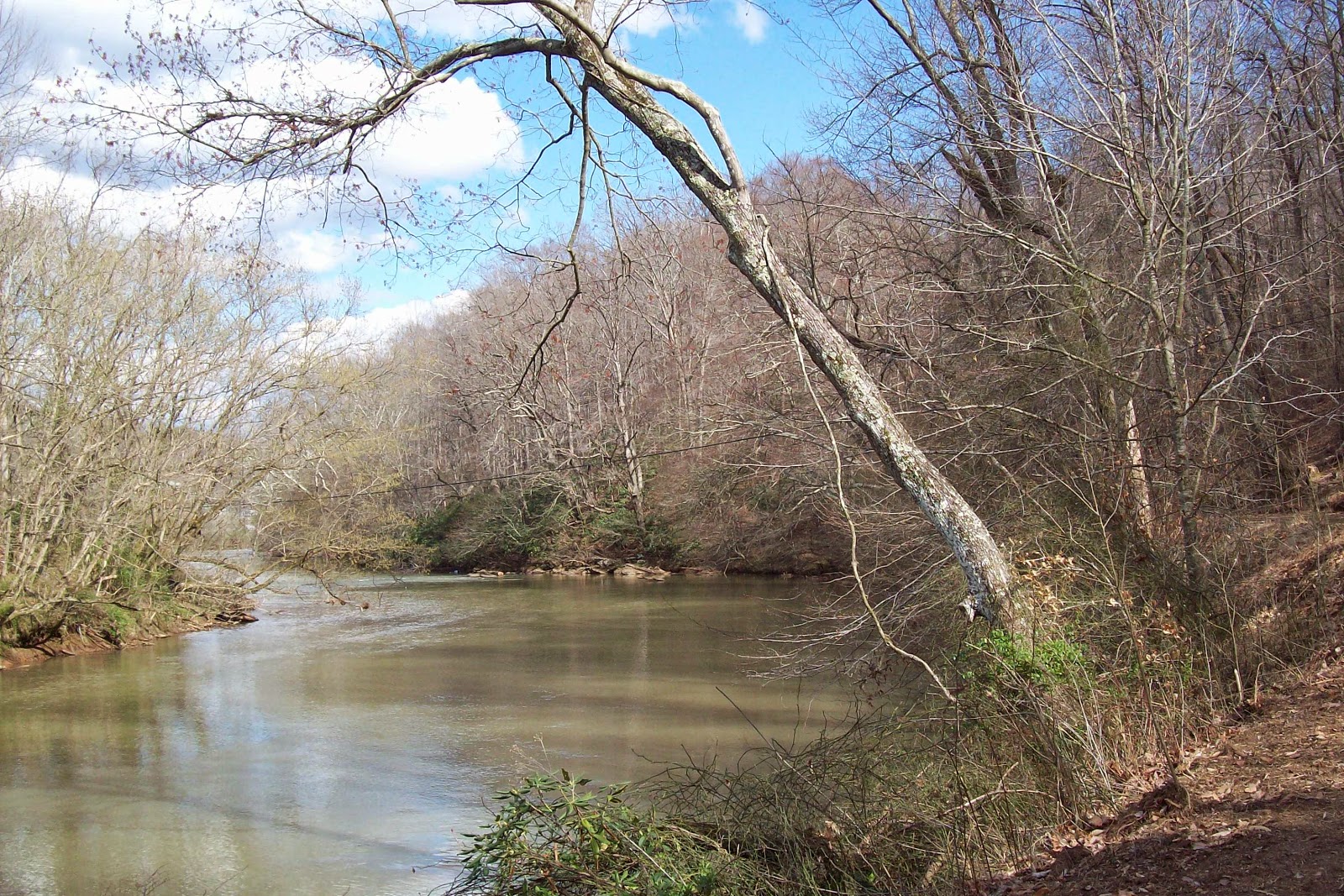 A special shout-out to the Pritchetts and the Albaneses for their hospitality this weekend. Couldn't do without such excellent folks. Thank you.
Posted by Stephen Mark Rainey at 11:09 PM 1 comment: 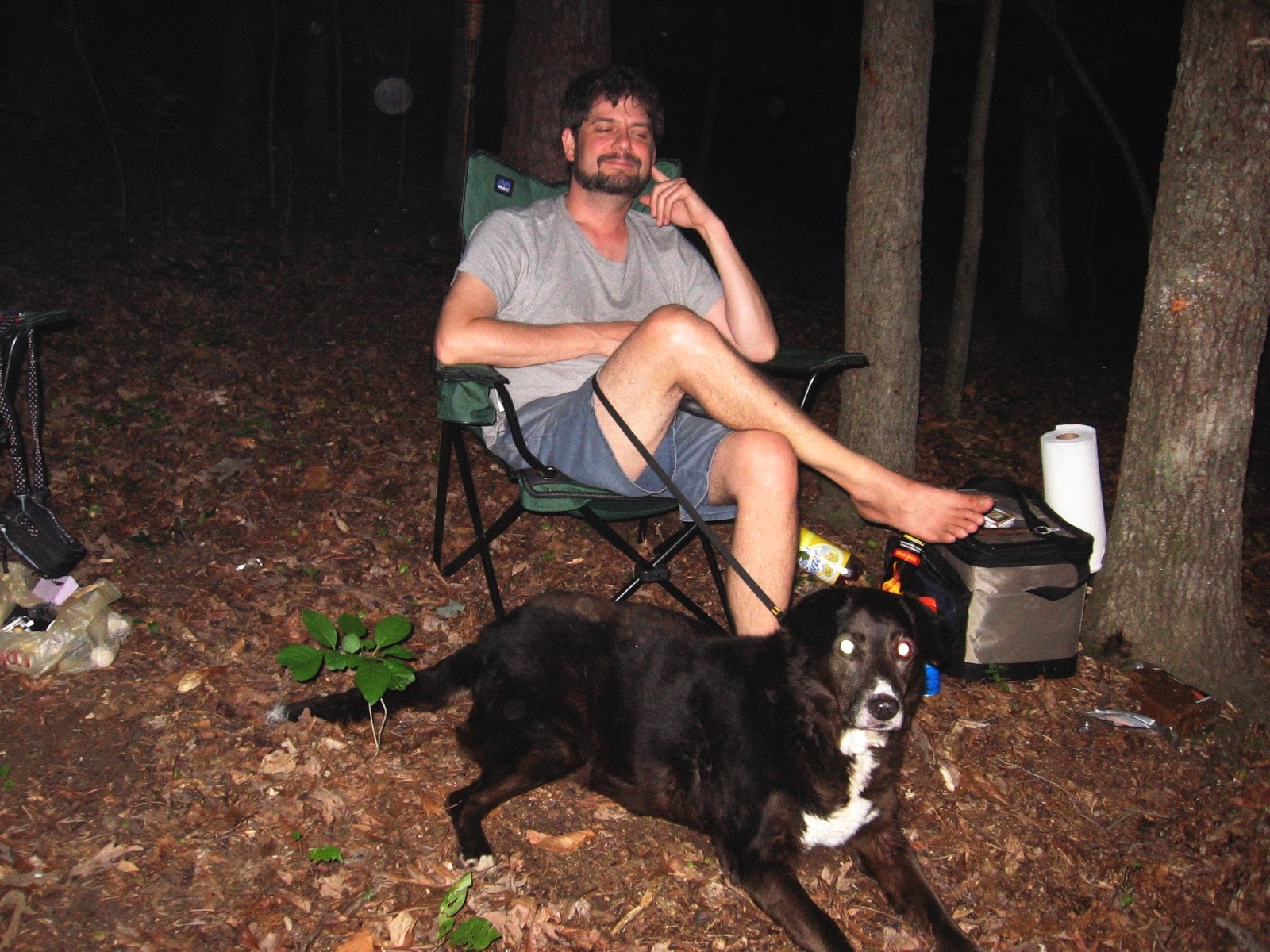 My brother Phred's goodest ol' friend, Luther, passed on today. He was a sweet, sweet dog—pretty much a real nephew to me. Luther had a good life with my brother, who loved him mighty dearly. Please raise up some good wishes for Phred. Bye bye, Looth. We'll miss you much.
Posted by Stephen Mark Rainey at 11:30 PM No comments:

Mrs Death accompanied me on a nice evening trip to Randleman, a little town just down the road a piece, to hunt for a passel of caches. We found 15 out of 16; I brought home a travel bug, the remainder of an excellent dinner, and a crapload of briers embedded in my flesh. Yeah, there was a terrain challenge or two, so the souvenirs were kind of inevitable. Worth every little drop of blood, too.

We found one of those wonderful, quaint local joints for dinner, called The Wild Onion. Southern home cooking and all, and just damned good. I had me some killer pig ribs. I mean the ribs were killer, not the pigs. Well, probably.

Once again, caching has taken us to some really neat places we'd just never otherwise get to. Love it. And I made it another day without falling into a river, lake, creek, or other body of water. Yay!

The Wild Onion, a quaint little restaurant down in Randleman

Posted by Stephen Mark Rainey at 12:39 AM No comments:

I Didn't Fall in Today

I really like the Greensboro watershed trails; there's many miles of them around the various lakes to the north of town. They make for fine hiking and are abundant with wildlife and unspoiled woodland. Not to mention they're full of geocaches. It was such a beautiful afternoon that I expected the woods to be full of muggles. Nope. For all practical purposes, I was the only soul out and about on the Piedmont Trail today. I put in an easy three-mile hike and found a number of the remaining few trail caches I haven't yet claimed. Not much wildlife out today, I found. Several times, I stopped to take some pictures, and the air was as still and silent as I've ever experienced. Not a breath of breeze or chirping of birds. Absolute, natural silence.

Of course, it's a great place for the horror writer's instincts to kick in big time. There's one spot where you come out of the woods and you can view an isolated house in the distance. While it's a nice place, I get the feeling if I were to venture much closer, I might be treated to the sound of chainsaws and screaming.

Three caches and one stage of a multi claimed today. It was a good, long hike. I be bushed.
Posted by Stephen Mark Rainey at 10:36 PM No comments:

That Water Sure Is Wet

Went out to Northeast Park for a few caches after work, only to find that, for a couple of them, you had to go across the river. After all the rains, the river was right swollen. And the very steep bank was very muddy. And slick.

It was a weighty splash—the distinctive sound of 185 pounds dropping solidly into two and a half feet of water.

By the time I got to the nearby graveyard to find the cache hidden there, I was pretty well dried out. It's a neat little place, with graves dating back to the very early 1800s. A fine place to hang oneself out for a while.
Posted by Stephen Mark Rainey at 8:52 PM No comments:

The Horror at Midnight 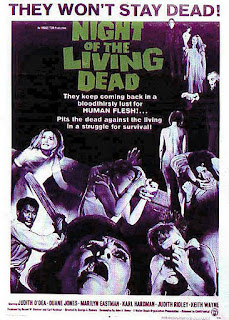 When I was a kid in Martinsville, VA, the Rives Theater was my home away from home. It's where I first saw a huge number of the horror and science fiction movies that I've loved ever since. To my dismay, the theater closed a few years back, and given the state of the local economy (currently, the unemployment rate is 18%, and it was bad here even when the rest of the country wasn't in recession), I figured it was probably for good. The other theater in town, the Martin, vanished many years ago, and it just seemed the Rives was destined to go the same way. Happily, though, the Rives has reopened—both for movies and live music shows—and they're even showing midnight movies on the weekend. Last night, they ran Night of the Living Dead, so Mrs Death and I rode up from Greensboro, got with our friends, the Albaneses, and made a night of it, with dinner and a great late-night horror movie (not to mention a number of caches).

"You're not going anywhere near that drive-in theater!" was the response.

Evidently the proximity of flesh-eating zombies to Godzilla and friends was enough to make my folks fear for my sanity. I don't recall exactly when I got to see Night of the Living Dead for the first time, but I do remember that the TV spots for it were enough to give me nightmares. I probably should never have mentioned that way back when....

Anyhoo, a night at the old theater with a classic horror movie in the company of good friends was exactly what the doctor ordered. Coming soon, the Rives is showing A Clockwork Orange for one of the midnight features. Gonna have to go because I haven't seen it in years—even though at home it's very aptly the second feature on the videotape of our wedding.
Posted by Stephen Mark Rainey at 2:37 PM 2 comments: 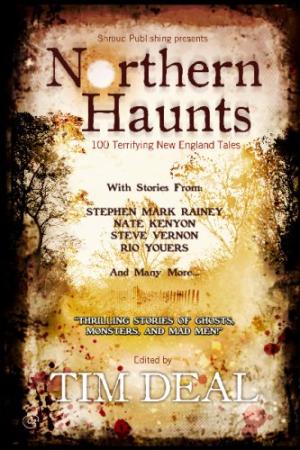 Recieved my contributor copy of Shroud Publications' Northern Haunts antho today; it features my tale "Black Tom," which is a horror story about—I'm sure this will shock you—geocaching. All the stories (exactly 100 of them) are very short and told in the first person, to affect the mood of a scary campfire tale (my favorite kind). A very nice-looking volume, also featuring stories by James S. Dorr, Blu Gilliand, Nate Kenyon, Gina Ranalli, Steve Vernon, and...let's see...94 other authors.

This weekend, or at least a portion of it, I will be at StellarCon, in High Point. I've got a panel at 9:00 PM tomorrow night, but I'm not certain at this point what the rest of my schedule will be. Reckon I'll find out when I get there. I will probably be doing a reading and booksigning sometime on Saturday. If you can get my coordinates, perhaps you can track me down.
Posted by Stephen Mark Rainey at 10:22 PM 2 comments:

And lordy, I'm a little sore. Gorgeous, gorgeous day for hiking. Almost 80 degrees, but a constant cool, comfortable breeze. Undertook a most interesting terrain challenge to snag a cache—had to walk out about 50 ft. on a fallen tree over Lake Brandt. Well, actually, I walked about halfway, then dropped and scooted the rest of the way. The cache site is within view of the nearby highway, and I nearly fell of laughing when some fellow in a truck drove by and yelled, "Hey, you, get the hell off that tree!" I didna really want to fall off, though, as I had electronic gadgets in my pockets that really oughta not get wet. Had the cache in short order and then set off on a nice long trail hike. Picked up another tough hide, too, so it was a most gratifying early afternoon.

Now it's time to have a martini and write the last 500 words of me current project.

Hmm. I'm really dying for some sushi about now.
Posted by Stephen Mark Rainey at 4:44 PM No comments: 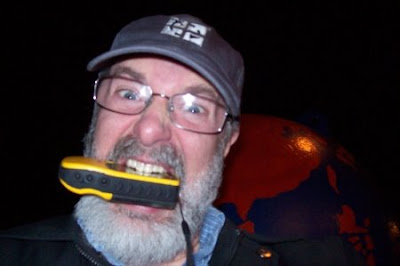 Finally had a chance to get out and find a cache. Snagged #1,100 tonight—a neat one called "Planet Earth" in downtown Greensboro. One of the logging requirements is to post a photo of yourself with your GPS at the cache site. Done and done.

I'd move heaven and earth to eat a Garmin.
Posted by Stephen Mark Rainey at 11:09 PM No comments:

Consistent with the ongoing spirit of busybodyness, this week has been a whirlwind of activity, some fun, mostly not, precluding much blogging, tweeting, facebooking, Aces High, or any of that entertaining nonsense. Let's see...during the "big" winter storm we had the other night, our power flashed on and off a few times, blowing up my computer quite nicely, thank you very much. I thought that's why we had surge protectors, but it laughed mine off quite happily. F'ing bitch. My car needs brake work. Haven't even had a chance to hunt caches for several days. The old body is starting to feel this one. Weekend, please hurry.
Posted by Stephen Mark Rainey at 10:48 PM No comments: