I oftentimes end up hunting geocaches in the evening—sometimes fairly late—and tonight was no exception. I had just found a brand new one and was making to leave the site when I found myself surrounded by three sheriff's vehicles and several officers of the law. Evidently, copper thieves have been targeting the area, and it took the longest time for me to convince them I'd been hunting for a film canister, not copper wire. In the end, all was well, of course. And although it's kind of a pain to deal with, I'm rather glad to see the cops out there keeping an eye on the neighborhood. There's a lot worse things than me out there....
Posted by Stephen Mark Rainey at 11:26 PM No comments: 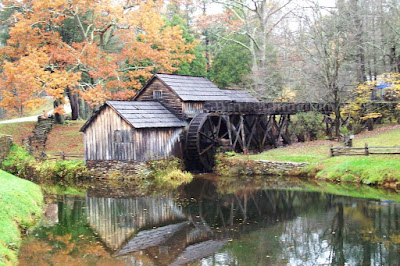 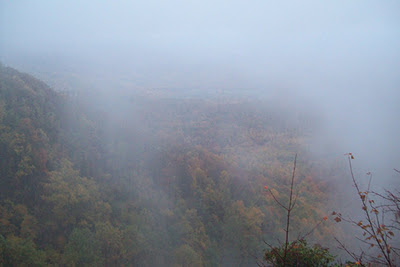 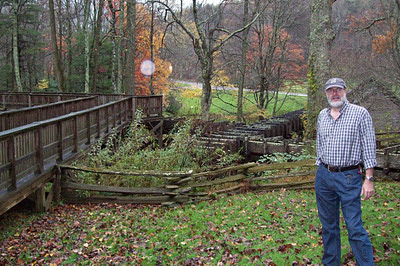 Hard to feature that it's come round time again to make our annual pilgrimage to Mabry Mill, on the Blue Ridge Parkway, near Meadows of Dan, VA. Mrs Death couldn't make it this year, but I headed up with our good friends, the Albaneses, and the meaner half of the Workmans, our next-door neighbors. The usual routine: get up and going a couple of hours before dawn, hit the road, and start grabbing geocaches. We snagged quite a few on the way, navigated through some very dense fog, and got to the mill restaurant right at 8:00 AM, when they opened. We were first in line and were soon chowing down on some fantabulous buckwheat, sweet potato, and cornmeal pancakes and sausage. Unfortunately, the thick mist turned to a pretty good rain, so we got rather damp while wandering along the walking trail on the mill grounds. Regardless, we managed to grab another nearby cache, and then we stopped to get pumpkins, apples, and cider at our traditional produce stand, just north of Stuart. In Stuart, we paid a visit to the Honduras Coffee Company shop, where I opted for a cup of damn fine Jamaican coffee. And hot!

After we parted company with the Albaneses in Martinsville, Mr. Workman and I made a run down to Kernersville for a regular crapload of geocaches. Grabbed a bunch, stopped for some Mexican food, and finally headed home. Not to end it all there, I went to see Paranormal Activity, which I enjoyed immensely. Apart from a few somewhat over-the-top moments that fell flat, it was one of the creepiest movies I've ever seen. Akin in its approach to The Blair Witch Project, it's many times more successful, with well-rendered camera-work and an effective, unsettling story. I loved it. In fact, I'd go so far as to say it's bound to hold up as one of my favorite horror films. An excellent show for the Halloween season! Check it out... 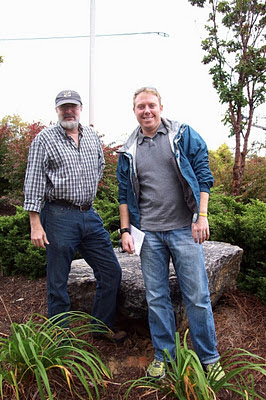 Posted by Stephen Mark Rainey at 1:25 AM No comments:

Back From Book 'Em 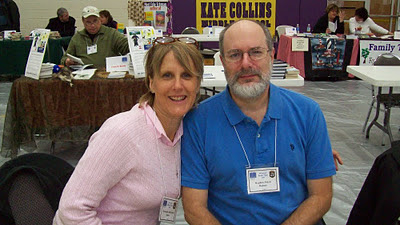 Young Adult author Liz Jones and the scary dude.
Returned from Waynesboro, VA, this evening, after a very fun and profitable weekend, participating at Book 'Em, the literacy benefit book fair I take part in each year, and hanging out with good friends Beth Massie, Cortney Skinner, and Elizabeth Jones. As I blogged previously, after selling out of my other titles at The Woods of Terror last week, I had only copies of Blue Devil Island and The Lebo Coven left for Book 'Em. Wonder of wonders, those sold out too, even though the crowd seemed smaller than it has in recent years. At least folks were buying books.

Last night, we watched a fun little movie by the legendary Larry (Lost Skeleton of Cadavra) Blamire titled, Meet the Mobsters, in which Beth and Cortney have parts as extras in several scenes. Quite the hoot.

Naturally, one of the highlights of the trip was finding 25 geocaches. Today, Cortney, Beth, and her son-in-law, Ben, came out with me, and we braved chilly temperatures, wind, and a spot of rain to find several. Enjoyed that little outing immensely.

All in all, a weekend well-spent.
Posted by Stephen Mark Rainey at 9:30 PM No comments: 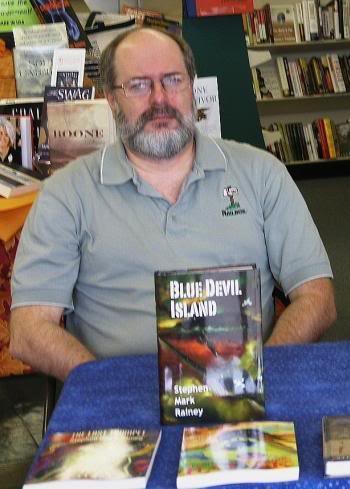 If you're anywhere near Waynesboro, VA, this Saturday (10/17), come round to Book 'Em, the book fair to benefit literacy, at Kate Collins Middle School, from 9:30 AM to 4:30 PM. I'll have copies of The Lebo Coven and Blue Devil Island available. Alas, I won't have copies of Other Gods, thanks to selling out my supply at The Woods of Terror in Greensboro last weekend. Never expected that to happen! Not that I'm unhappy about it; only downside is that I couldn't get in new copies in time for this weekend. You can get more info on Book 'Em, including directions, right here: Book 'Em 2009. I'll be staying with Beth Massie & Cortney Skinner; I foresee some serious geocaching in the forecast, as well....
Posted by Stephen Mark Rainey at 12:37 AM No comments:

Terror in the Woods! 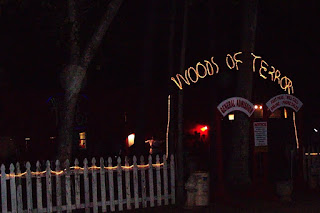 I imagine it's safe to say that your typical Halloween haunted trail, no matter how elaborate—such as The Woods of Terror on Church Street, just north of Greensboro—is hardly the place your typical horror writer—such as I—might expect to autograph a passel of his scary books. Most of the attendees are there to get their pants scared off on the trail itself and aren't really seeking out the latest in literary horror cuisine. But much to my delight, it proved to an exceptional evening. Hung out in the "Horror Museum" for about four hours and devalued a regular crapload of books with my signature. Oh, these poor people; they have no idea....

I didn't go out on the trail itself, not this time. However, the venue has been done up quite nicely since the last time I was out there—two years ago, I believe—and it really looks good. Before it's all over with, I might just have to pop out there again and see whether all those chainsaws really have been de-fanged. Some of the cute little teenage girls I encountered were horribly afraid they weren't.

I didn't have the heart to tell them they might actually escape unscathed. I mean, who wants to be a party pooper?

Posted by Stephen Mark Rainey at 11:27 PM No comments:

The Pharaoh, a Blood Dance, and the Woods of Terror

I just received my author copy of the new Dark Shadows audio drama, Curse of the Pharaoh, which I wrote a while back for Big Finish Productions. It stars Nancy Barrett as Carolyn Stoddard and Marie Wallace as Dr. Gretchen Warwick, an Egyptologist. It's an excellent production, directed by Joe Salvatore. All parties involved did a fabulous job bringing the script to life. The acting, the sound effects, the pacing, and the musical score by Nigel Fairs all come together to excellent effect. This is my second Dark Shadows dramatic reading project, and it's exciting as all getout to hear it performed...especially during those moments when it exceeds my own imagination. You can order the CD (and soon the mp3 download) from the Big Finish Web site: Dark Shadows: Curse of the Pharaoh. It's very reasonably priced at $13, and that includes shipping. 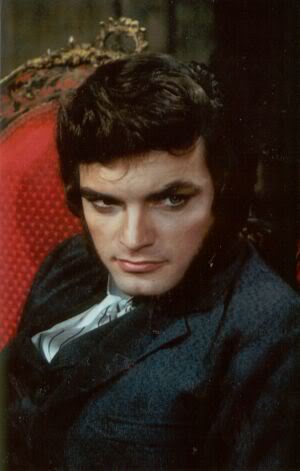 Coincidentally, I just finished the first draft of my next script, tentatively titled Dark Shadows: Blood Dance. The story is set in the 1920s and features Quentin Collins as the main series star. It'll be some time before it actually happens, but I'm sure Big Finish will do their usual fine job with it.

This Friday (10-9-09), I'll be selling and signing books at the Woods of Terror on Church Street in Greensboro, NC, from 7 PM to 10 PM. Will have copies of Other Gods, The Lebo Coven, and Blue Devil Island. This a most elaborate and exciting haunted trail, and if you're in the area, come on around, so you can get scared as hell. I mean, that's what the season's all about, ain't it?
Posted by Stephen Mark Rainey at 7:35 PM 2 comments: