CURSE OF THE PHARAOH Available for Pre-Order 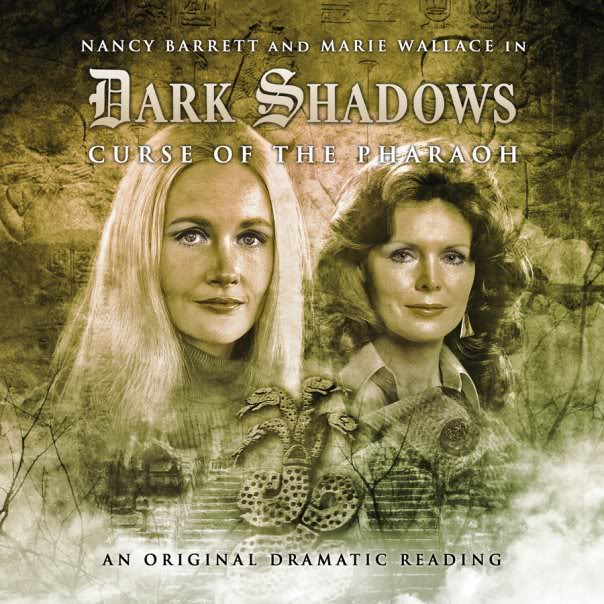 The newest Dark Shadows audio drama, Curse of the Pharaoh, which I wrote for Big Finish Productions, is now up for pre-order: DS: COTP. Should be out within the next few weeks; if this one follows the manner of previous releases, when you order the CD, you also get to download it for free so you can listen to it as soon as it's available. Curse of the Pharaoh stars original TV series cast members Nancy Barrett as Carolyn Stoddard and Marie Wallace as Egyptologist Gretchen Warwick.

It's very reasonably priced at $13.00, and Big Finish is very good about shipping items promptly. The audio dramas are stand-alone productions, but having prior knowledge of the Dark Shadows storyline doesn't hurt, of course. On the whole, Big Finish has outdone themselves on the production of these, with great performances, sound effects, and new music. Needless to say, I recommend 'em. For more info on the story, you can check out the preview page on my Web site: Dark Shadows: Curse of the Pharaoh.
Posted by Stephen Mark Rainey at 10:42 AM 2 comments: 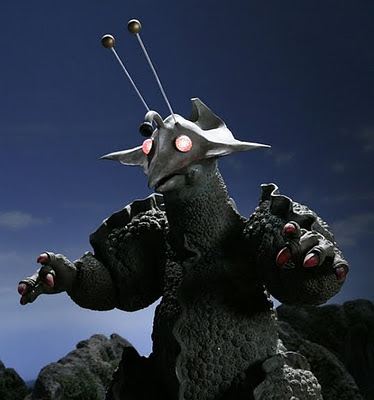 Back in July, a couple of aging juvenile delinquents who weren't able to travel to Chicago to attend G-Fest (G for Godzilla, of course) got together for a mini G-Fest here at home. Mr. Bill Mann and I watched few daikaiju flicks and exchanged a relatively large number of phrases and sentences—at least a few of them immaculately constructed—on the subject of giant monsters. We enjoyed the whole business so much we decided that we could stand to do it again. So yesterday, we did this thing, adding to the guest list one Mr. Wayne Miller (whose extraordinary artwork graces the cover of my fiction collection, Other Gods, among many other books and periodicals).

We partook of some gems and some things other, including Godzilla: Final Wars, Attack of the Crab Monsters, and Monster X Strikes Back: Attack the G8 Summit! I've seen Godzilla: Final Wars many times now, and I find it an almost perfectly balanced film: for its every excellent aspect, it features another that is correspondingly abysmal. Attack of the Crab Monsters is a hoot, and probably the most enjoyable of the bunch. It was nice to see the thing in its entirety after having slept through portions of it when it ran on late-night TV a couple of years back (Crab Attack). As for Monster X Strikes Back...occasionally, it had us in stitches, though most of the time we pretty much gaped in horror at what had been wrought. I mean, goodness gracious me.

There was food in abundance here, and the monsters were free to eat as much of it as we could catch. It was another fine time, so I foresee yet another Mini G-Fest over the not-so-distant horizon.

Then it was off to Winston-Salem to catch my brother perform a show at the Garage (same venue where my friend Kim and I occasionally make noise). Lots of good music and company. Ended the evening by going caching on my way home—and as has become typical for my urban cache outings, particularly this late-night stuff, I had the pleasure of explaining geocaching to a sheriff's deputy. She was very thorough in checking me out (which I consider a reasonable thing—it means the police are doing their jobs), but also very understanding and quite taken with the idea of caching. Perhaps we have another convert. Anyhoo, got in about 2:00 A.M., after a most gratifying day. Every now and then, it just pays to have one of these.
Posted by Stephen Mark Rainey at 12:29 PM No comments: 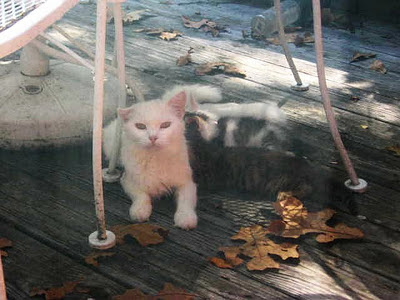 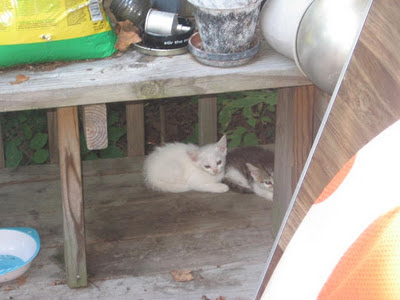 Not sure who opened the floodgates, but in recent days, our place seems to have become a feral cat hotel. Three or four started coming around a couple of months ago, including a white Persian who is wilder and more ornery than a mountain lion (see pic above). Another one was obviously pregnant, but we haven't seen her in quite a while, and we hoped she might have managed to find greener pastures. Well...who knows...but three kittens suddenly appeared on our back porch the other day, and the white Persian—who is obviously not the mother but possibly the father—seems to have adopted the little things. They're such beautiful critters, but truly wild and very easily spooked; we really can't even get near them without them either running away or clawing us. I hate the idea of them starving to death, so we've started leaving some food out—yeah, I know, I know—but if it's even possible to round them up, I expect we'll have to get them to the Humane Society or something. It breaks my heart to see these animals abandoned and left to their own devices...and there are so many of them around now. The bad thing is that we're not in a position to take in more than the three cats we already have, and our spoiled domestics would certainly not mix well with these beasts.

Kind of a Kalem Klub 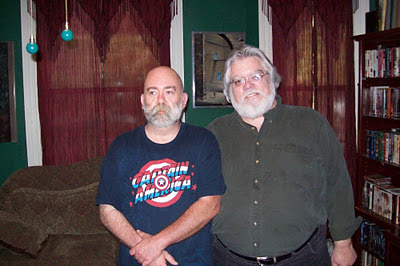 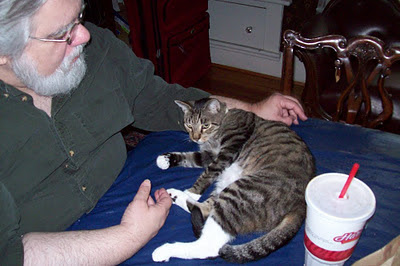 Mr. Price and Helix the Cat—a rare delicacy
Spent an enjoyable weekend in Selma, NC, at the Price abode, which played host to Lovecraftian comrades-in-arms Joe Pulver and that Mr. Deathrealm dude. Good eats, good yakking, and good DVDs, including The Mist and a biopic of H. P. Lovecraft, which featured the likes of Peter Straub, Neil Gaiman, Caitlin Kiernan, Ramsey Campbell, John Carpenter, Stuart Gordon, and Mr. Price himself. Not as much sleep happening as most old farts prefer....

And 44 caches grabbed betwixt coming and going. Most satisfying.

This weekend was also the 23rd wedding anniversary for Mrs Death and me. We did manage to get in some quality time together and lament the senseless death of so many years. How do these horrific things happen, one must wonder....
Posted by Stephen Mark Rainey at 9:08 PM 1 comment: 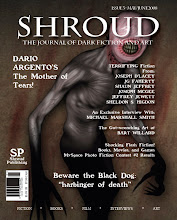 A short while back, Tim Deal of Shroud Publications asked several author/geocachers around the country to place geocaches containing some nice Shroud-related prizes. It's a neat idea, so I was happy to contribute one of the hides. It's #4, titled "Crowley," and it's located...not too far from where I reside.

Come and find it...if you dare. The coordinates for all the caches may be found here: Shroud Publications' Find the Horror

Some hints are included. If you're looking for Crowley and need help, drop me a line.
Posted by Stephen Mark Rainey at 3:05 PM 1 comment: 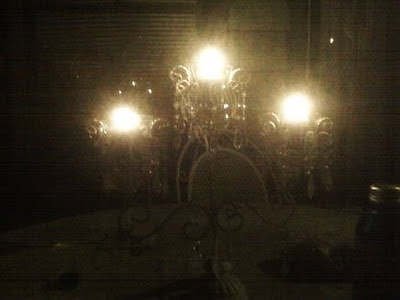 A pleasant weekend visit from Allison, our young'un, and her friend Larry. Watched a couple of Asian gore flicks—Takashi Miike's Ichi the Killer and a Thai rip-off of Ju-On called Sick Nurses—neither of which were very good, but provided reasonably entertaining diversions during the evening. For her birthday, Mrs Death had gotten a 90-inch inflatable pool, which is a weird damned thing, but we lounged in it last night and rather enjoyed it. Good eating, a spot of drinking (for some—no names mentioned—more than a spot), and good weather made for a right relaxing weekend.

Also posted a few of auctions on Ebay that might be of interest to horror and giant monster fans:

Better quality here, though the first minute of the song is truncated: Traveling Light
Posted by Stephen Mark Rainey at 10:37 PM No comments: 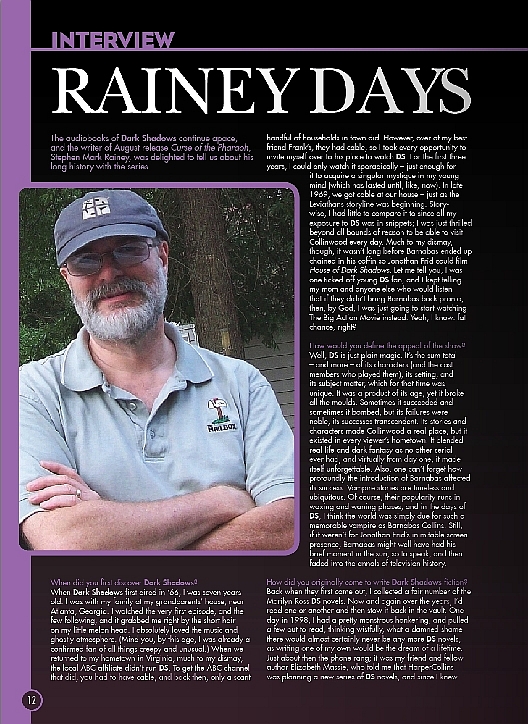 Vortex magazine interviewed me a few weeks ago about Dark Shadows: Curse of the Pharaoh, the new audio drama script I wrote for Big Finish Productions. The issue is now out, and the online version (PDF) can be found here: Rainey Days (the interview begins on page 12). The audio drama is due to be released later this month, and stars Nancy Barrett as Carolyn Stoddard and Marie Wallace as Professor Gretchen Warwick. Can't say much about the storyline, but it involves Egyptology, love and revenge, and the Great Old Ones. More on that soon....
Posted by Stephen Mark Rainey at 4:36 PM No comments: 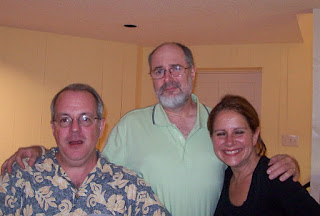 The weekend's theme has been rather fiendish, actually. Friday night, Mrs Death and I got together with some old friends of mine, whom I think I've seen all of twice in the last 25 years. Talk about ghosts from the past! It was Mr Vance Pitzer's birthday, so he's now been made to feel appropriately aged, I do believe. Unfortunately, our mutual friends, the Albaneses, had issues that prevented them coming to the gathering, but we sort of rectified that last night. I had spent the afternoon placing a couple of new geocaches with spooky themes ("The Chatmoss Ghost" and "Sticks," based on Karl Edward Wagner's horror story of the same name), and so Joe, Suzy, and Sam went out into the deep, dark woods and found those little scary boxes.

One evening back in 1982, Mr Pitzer (pictured above, along with his lovely wife Kathy and some dude)—along with several other young friends (a few of whom were minors at the time) went to Pizza Hut. We ordered a pitcher of beer, but since there were minors at the table, the restaurant staff said they couldn't serve us any beer. Suitably indignant, Vance says to the waitress, "Don't you know who I am?" Unimpressed, she shakes her head. "I'm Mr Pitzer. My dad owns Pitzer Hut."

Needless to say, we got that pitcher of beer.
Posted by Stephen Mark Rainey at 11:57 PM No comments: