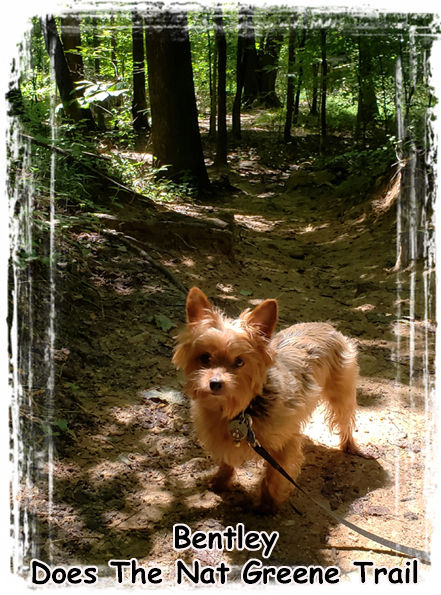 The Socially Distant No-Dead-Weight Irregulars — Diefenbaker (a.k.a. Scott), Fishdownthestair (a.k.a. Natalie), and The Terrible Old Man (a.k.a. moi) — had originally planned a geocaching adventure in Durham today, but a last-minute change of minds led us to a new cache — called “Bentley Does the Nat Greene Trail” (GC8YHX7) — on the Nat Greene Trail in Greensboro by friend Old Rob (a.k.a. Old Rob) instead. We converged on ground zero, where coordinates kept settling in two different spots about 25 feet apart. So we focused on those two areas, checked out all the terrain between, and extended our search area by a considerable distance. Nada. After forty minutes or so of scouring the site, we hit on an idea provided by the cache page, which was so obvious that only a bunch of blind bats could have overlooked it. Actually, we probably should have named ourselves The Three Blind Bats. However, we did act on this obvious idea and soon had the cache in hand. It was a toughie, to be sure.

After our return to the trailhead, the adventure continued in less-than-pleasant fashion. Due to lack of parking space in the too-small lot for the trail, I parked on the side of the road along with quite a few other vehicles. What I didn’t realize was that, underneath all that oh-so-innocent-looking grass, there was a big old pool of mud. This resulted in the Rodan Mobile becoming unstuckably stuck. A call to AAA set things right, but... mercy... what a bother. I hope Dog is pleased with himself.

And now, back to working on my latest Ameri-Scares novel — New Hampshire: Ghosts From the Skies.
Posted by Stephen Mark Rainey at 6:28 PM No comments:

Yesterday after work, I headed up to Martinsville to deal with some pressing affairs following Mom’s passing. Nothing too taxing at this point, at least. And afterward, friends Stephen & Samaire Provost came over to have a few drinks and some stimulating discussion — everything from writing, publishing, memorable days from the past, and current events. We were very conscientious about social distancing — we sat outside on the front porch, about ten feet apart, each with our personal supplies of hand sanitizer. Stephen even wrote an excellent blog that grew out of the event — “What If We All Drove Drunk?” No, none of us drove drunk. And we didn’t behave carelessly, even after a few drinks.

This morning, I awoke to notification of a brand-new cache having been published — just up the road from Martinsville at Fairy Stone Park. The timing was propitious. Fairy Stone is one of my favorite places to hike and hunt caches, and the morning turned out to be just right for it. Well, except for the extraordinarily high humidity, which made me feel like I was breathing mayonnaise on the hike. It wasn’t too far (just under two miles round trip) or too rugged, but it made for some good morning exercise. And I got to see a section of trail I’d never been on before: the dam on Goblintown Creek, which is one of the tributaries of Philpott Lake, where Fairy Stone is located. There is a huge, carved granite Fairy Stone on the lake bank there, which can be seen from some distance. It makes for an unusual and striking landmark.

At ground zero, I struck gold quickly — a little too quickly, as the cache container was sitting out exposed and very close to the water’s edge. I think all our recent rain helped the cache migrate somewhat from its hiding place. I put it back so it will hopefully remain both in place and out of sight. I did, in fact, dirty up the pristine logbook with a most gratifying FTF (first-to-find) signature. First-to-finds don’t really mean much, as it’s not like you earn anything extra for the effort, but they’re fun enough to snag when I can get ’em.

A while back, writer/editor Holly Kozelski at The Martinsville Bulletin had reached out to me because she was putting together some stories about the personal impacts of COVID-19. She asked if I might contribute an editorial since Mom passed away due to complications from the virus. So, I performed some serious surgery on my blog entry titled “Wildfire” from some weeks ago and submitted it to her. The piece just came out in the Bulletin. (You can generally snag a freebie or two before they ask you to subscribe.) ’Tis here: “My Mother Is Gone...”

Together with Stephen’s blog linked above, the two form a pair of interesting companion pieces. Makes me think we might be onto something.

Posted by Stephen Mark Rainey at 5:00 PM No comments:

Cachin’ Away the Clusterfuck

Sure enough, 2020 has been pretty much a clusterfuck since it began, and it’s most assuredly not going to miraculously turn around anytime soon. Now that Mom has passed away, I am engaged in the long, uphill battle to get estate affairs squared away, which promises to be grueling. As yet, I haven’t even gotten the death certificate(s), as I understand things are running way behind due to so many people dying of COVID-19 in NC, plus the ongoing issues with the postal service. Sometimes, I reckon it’s enough to make the Pope say “goddamn.”

Still, through it all, there have been a good many shining moments, mostly involving geocaching, which—more than any other personal activity—pulls me out of the shitter, at least during the time I’m hard at it. Early during the pandemic, a wealth of new caches came out locally, which offered numerous opportunities for getting out in the woods and hiking. There haven’t been quite as many of those in recent days, but at least there are still some around to get me out of the house and active. A couple of times recently, including yesterday, I headed down to Randolph County, where a bunch of mostly park & grab caches have come out. Car caches aren’t as invigorating as hiking caches, but, regardless, they offer their share of fun, and a fair number of them have taken me to unique and memorable settings.

Today, I joined up with the Socially Distanced No-Dead-Weight Irregulars—friend Natalie (a.k.a. Fishdownthestair) and friend Scott (a.k.a. Diefenbaker) to hunt up a new one placed by our devious friend and frequent geocaching partner Old Rob (a.k.a. Old Rob). In fact, Old Devious his own self came out to watch us stumble about on the hunt. This cache—called “Old Men Can Be Devious” (GC8W9F1)—lurks in one of Old Rob’s favorite geocache hiding spots, namely a brier patch. And what a brier patch it is. A regular laughing place, in fact. As Rob says, “No blood, no fun.” Finding the cache took no little effort, but based on the amount of blood I shed, it was a helluva lot of fun.
There was, of all things, an earthquake this morning. 5.1 on the Richter scale, if I’m not mistaken, the epicenter out near Sparta, in the mountains of western NC. Everyone in Greensboro seemed to feel it except me, even though I was awake at 8:07 AM, when it occurred. Now, a lot of folks indicated that their houses shook and their animals paid the event special mind. Me, I was apparently so involved in a discussion with Frazier and Droolie about why there is/is not a Great Starvation that it passed unnoticed. Kind of a bummer.

Posted by Stephen Mark Rainey at 6:25 PM No comments: