It Is Happening Again... Stellarcon 37

Stellarcon 37 is taking place this weekend at the Greensboro-High Point Marriott Airport hotel. I’ll be on a few panels, signing books, and raising a general ruckus. Panel schedule as follows:

Ms. B. and I will be skulking around the premises at various times, so watch your back. Seriously.
Posted by Stephen Mark Rainey at 10:01 AM No comments:


If you visit this blog, like, ever, you'll know I am a fairly rabid geocacher. I've been at this little activity for just over five years and have claimed about 5,600 caches to date. As you might imagine, most of the cache logs within a reasonable distance of home already bear my signature, so when new caches pop up, I'm pretty much chomping at the bit to go after them. When I started in 2008, only a scant few caches had been hidden in Danville, VA, and I had claimed the lot of them in just a couple of visits. However, over the years, as more geocachers have become active in the area, Danville has become a veritable geocaching Mecca, full of clever, ingenious, and memorable hides, placed by individuals bearing such intriguing aliases as Klaussinator, Allofdem, JJ&MJ, Spring1, Esddan, Djnpd, Oneeyedwillie79, keithandlaura, and many more. I keep cleaning out Danville, and they keep putting out new ones, bringing me back time and time again... and I love every minute of it. Danville's not a terribly big town, but it's a picturesque place with a rich history, much of which you naturally discover as you go about hunting the hides around the community. With miles upon miles of trails in Angler's Park, Dan Daniel Park, Ballou Park, and the Riverwalk, there's no shortage of hiking and/or biking, and the plentiful hides in the town proper — as well as out in Pittsylvania County — have led me to discover some fun little restaurants and wine bars, such as The Corner Cafe, Tokyo Grill, and Jake's on Main.

Today started out cold and rainy as all get-out, but as I had to head up to Mum's in Martinsville, I detoured through Danville to pick up yet more caches I needed (and left myself enough for another trip or two). I snagged several — in town and at Dan Daniel Park — but the highlight of the outing was surely lunch at Tokyo Grill. I've eaten there a number of times, but today I tried their chirashi for the first time, and, oh lordy, it was so good I friggin' hollered. I like sushi almost as much as caching, and while Tokyo Grill generally does it right, the chirashi they did all kinds of right.

Whether or not you're a geocacher (if not, you have my sympathies), hie thee on over to Danville to sample the wares of all varieties. Tell 'em Damned Rodan sent you.

Hey, looky looky what reviewer TT Zuma at Horrorworld.org said about my latest:

"I would recommend The Monarchs to anyone who enjoys their horror intelligently written, character driven, and bloody. Without giving too much away, I can say that The Monarchs has one of the most exciting endings to a novel that I’ve read in the last year. You really shouldn’t pass this one by."

I'll buy that for a dollar! (You can actually get The Monarchs on your Kindle or Nook for little more than that, and the trade paperback is currently only twelve bucks at both Amazon.com and Barnes & Noble.)

Read the entire review at Horrorworld.org, and then hasten yourself over to one vendor or another to check out the novel. It'll do the most terrible things to your innards, for god's sake, and that don't sell you, I don't know what will.
Posted by Stephen Mark Rainey at 9:54 PM 2 comments: 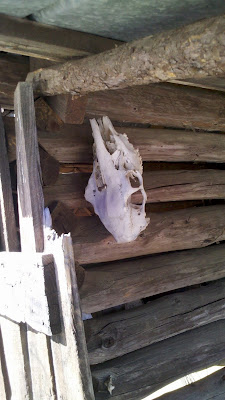 Today turned out to be chilly and blustery but sunny, so what better idea than to go out to the wilds of Caswell County to hunt "The Caching Dead" (GC44TRM) with some fellow geocachers? In the early afternoon, I met up with Homestyle (a.k.a. Audra); her son, Homekid (a.k.a. Zachary); Ithink314 (a.k.a. Bob); and Geocachere (a.k.a. Karen) to brave the frigid winds and hordes of living dead. First order of business was to claim first-to-find honors on a brand new cache in the area; then it was off to explore the county's darkest corners where the deer and the undead play. Some of the settings we encountered were a creepy, abandoned hatchery; a creepy, abandoned prison; a creepy, abandoned community center; and some creepy, perhaps not-quite-abandoned woods. Sights of interest included several skulls nailed to walls and hanging in trees, a spent tear gas canister, and a severed hand (also dangling from a tree). Certain of our party seemed to be overcome by the zombie fever, for — depending on whom you asked — they could be described as ordinary-looking people, misshapen monsters, people who look as if they're in a trance, and creatures that look like people but behave like animals (see accompanying photographic evidence). We signed our logs as "Team Deathrealm," after the title of the magazine that you-know-who edited all those many years ago (it seemed apt enough). "The Caching Dead" itself is the brainchild of my semi-regular caching partner Rtmlee (a.k.a. Robbin), and it earns an easy favorite point from the old man.

At the end of it all, we hied ourselves to a quaint little community called Milton, just this side of the Virginia state line, and an equally quaint establishment called Aunt Millie's, where we took respite from the coming night and downed some tasty beer and vittles. Afterward, we went our separate ways, and I can only hope the surviving members of our party actually survived.

At some future time, I'll let you know whether I did.

Posted by Stephen Mark Rainey at 11:19 PM No comments:

The Leaning Table, or Shevacon 21 is History

Shevacon 21 officially ended today, and my final activity in Roanoke was to have lunch with Brugger at Blues BBQ Company, on Market Street, which served us the best barbecue I think I've ever tasted... and that's saying all kinds of something. The restaurant is in a very old building, and the floor clearly sags in places; our table leaned at an angle of about five degrees, which made for a most entertaining lunch experience — and, as the young lady said, it would have been even more fun if we'd had marbles to play with.

This year, I ended up spending less time than usual at the con and more time wandering Roanoke with Kimberly — snagging geocaches when appropriate, of course. I did participate in four panels, which all went swimmingly, and I quite enjoyed the dealers' room and art show. By all accounts, the programming went smoothly this year, with panels commencing and ending right on time, and con personnel typically on hand to reign in out-of-control aliens (though it did appear that a squad of Imperial stormtroopers crashed a Mardi Gras party in one of the banquet rooms; I hope there was no shooting, for the stormtroopers wouldn't have had a prayer). I understand the judges of the costume contest dilly-dallied far too long, but that particular activity is one for which I have little affinity, so I did not experience this frustration firsthand. My compliments to programming director Jeremy Stroup and his team, who evidently had things well in paw this year.

For Kimberly and I, the weekend's highlight was the Hotel Roanoke itself, which hosted the con this year. We only stayed there Saturday night, since it's a bit on the pricey side, but its central location made it easy for us to get out and about and find myriad interesting corners in the downtown area. There's lots... and I mean lots... of choices for dining, and we discovered some distinctive and surprisingly affordable establishments. Besides the barbecue joint, we enjoyed Alejandro's Mexican Grill, Metro!, Thai Continental, and Wasabi's — not to mention the hotel bar, The Pine Room (which served as an officer's club in World War II). After dinner at Wasabi's last night, upon our return to the hotel, we discovered numerous lit braziers providing warmth out on the hotel terrace, so Brugger and I spent a quarter hour or so sitting in the frigid wilds of downtown Roanoke, sipping wine and martinis, and loving every freezing minute of it. Despite oftentimes painfully cold temperatures and roaring high winds, we walked just about everywhere (which, after some of these meals, was the only decent thing to do), and I have to say I enjoyed Roanoke's character more than I ever thought I would. In my college days at Ferrum, only a few miles down the road from there, I visited Roanoke frequently (on its original run, I saw Star Wars in theaters 23 times, most of them in Roanoke — I beg your pardon, I am not a geek!), and I've been back through there many times over the years, but I'd say the city has remade itself remarkably in the past two or three decades. Go, Roanoke!

I, for one, hope Shevacon will be back at the grand hotel next year, and that, for our part, circumstances are right for a return engagement. 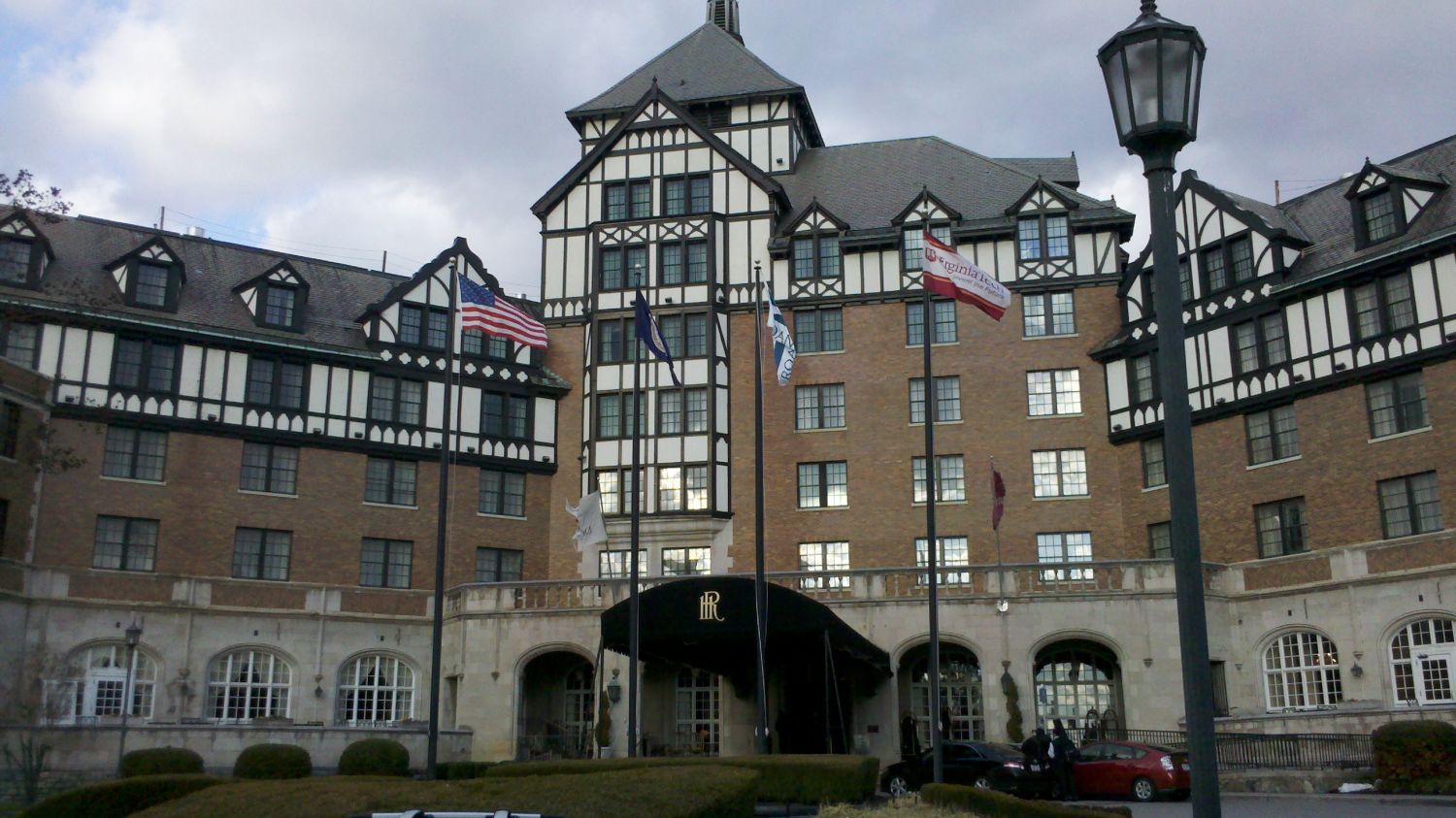 I haven't attended Shevacon in Roanoke, VA, either as a guest or attendee, in several years, but I'm back for Shevacon 21 this weekend as a writer guest. It's at the Hotel Roanoke, which is a bit pricier than than your typical mid-size convention accommodations, but it's smack in the heart of downtown, in a scenic location, and close to lots of dining and other entertainment establishments. Drove up from Greensboro this afternoon — and as a matter of fact, yes, I did grab a slew of geocaches along the way; thanks for asking. I had just one panel this evening — "Short Stories: When Do You Expand and When Do You Stop?" — but I'll be on several more over the course of the weekend, and I've got plenty of copies of The Monarchs, along with Blue Devil Island, Other Gods, and The Gaki to foist on unsuspecting victims.

Here's the schedule for the rest of the weekend:

When not involved with con business, I spent the afternoon and evening wandering around downtown, mostly hunting caches (found several), and taking in the character of the town. I used to spend a lot of time in Roanoke, but it's been many years, especially since I've visited downtown itself, and I'm finding myself quite taken with it. There's a walkway near the railroad tracks — aptly called the Railwalk — that describes a great deal of Roanoke's rich history, which I enjoyed walking but for the incessant, frigid winds that just about cut me into little pieces. I gotta tell you, this stuff felt just about like Chicago cold. Finally, I discovered a decent little Thai restaurant — Thai Continental, on Market Street — that quite hit the spot.

THE MONARCHS at Nook First

This week, The Monarchs is the featured title at barnesandnoble.com's Nook First section. The e-book is $4.99, available for immediate download. You can also get it in trade paperback ($12.99) and hardback ($26.89). I gotta tell you, Ms. B. read this thing and enjoyed it so much that, instead of grievous bodily harm, she hit me with mere vicious verbal abuse. That's some real testimony, that is.

Get it from Barnes & Noble here, or read more about the book and other ordering options at my website here. Do enjoy!
Posted by Stephen Mark Rainey at 8:59 PM No comments: