Found my 888th cache yesterday. Let him that hath understanding count the number, for it is the number of the wildebeest.
Posted by Stephen Mark Rainey at 10:18 AM No comments:

Baby, You Can Drive My Car — Redux

Got up this morning and headed to Ferrum, VA, where I went to college in the late 70s. There's a beautiful hiking trail through the mountain forest there, and it turned out to be a warm, sunny day for hunting caches. Found them, of course, but as I've said before, you never know what other kinds of things are lurking out on the trail....

What you might expect to see on a mountain trail: trees and some dude

What I found on a mountain trail
Posted by Stephen Mark Rainey at 4:33 PM 4 comments:

For me, the best thing in the world is spending quality time with my family, and the Thanksgiving/Christmas holidays are our traditional gathering times. Mrs Death and I joined my mom, my brother, and several family friends yesterday for a big Christmas dinner — the largest crowd we've had here for many years. Sadly, our young 'un was absent, but we hope to remedy that in February. It turned out to be a beautiful, reasonably warm day, which is my second favorite kind of Christmas. We swapped some nice gifts and gave a lot of thanks for having the opportunity to do so, since so many people — many that we know personally — are in very dire straits at the moment. Though 2008 in general has thrown some fairly nasty challenges our way, for now, we're still doing okay, so we made a little extra effort to share what good fortune we could this year.

Christmas wouldn't be Christmas, though, without some serious geocaching. Late yesterday afternoon, Mrs Death and I headed up to Rocky Mount, VA, about 30 miles up the road from Mom's, and went traipsing through parks and woods, snagging some really cool caches and taking in some picturesque locations. One of them was a memorial for WWII and Korean War veterans, which was a tranquil corner of an attractive little park. At one of the YMCA parks, the terrain was a bit much for Mrs Death, so I went out into the dark, very silent woods for a two-stage multi that would have made for a good Halloween night trek.

And speaking of...our final location for the night was a place called Piedmont Mill. Out in the sticks of Franklin County, this was the site of a grist mill built in 1870 and added to in 1922. Here they made a brand of flour called "Happy Maid," which was also the name of the cache. A creepy, creepy old place at night, portions of the original buildings still stand. The cache was located on an old trestle bridge that goes over the nearby river, and we spent a good while exploring the area — which is very near the fictional setting of so much of my scary fiction. It was an excellent end to a fun and meaningful day.

I hope all of you celebrated, in whatever way happens to be your own.

Posted by Stephen Mark Rainey at 2:00 PM No comments:

Yesterday was the last full day at the office till next Monday, so as far as I'm concerned, the holidays are hereby kicked off. Christmas shopping is done but for one particular item, which I'll pick up tomorrow. The family plans to be together for Christmas Day except for the young 'un, who can't get away from her job long enough to make the trip down — at least till February. She may grace us with her presence around Valentine's Day.

I do have approaching deadlines for three new writing projects, so there will be much writing going on over the holidays. A good thing, as it keeps me sane and almost out of trouble. I also anticipate a bit of caching, also to keep me sane — although last night, Sneaky Bulldog and I traipsed out in the freezing cold for over an hour to hunt for a new hide by one of our local evil geniuses (Newzerboy!!! [you should read the name aloud in a sinister voice that trails off into a rumbly growl]), all to no avail. The bulldog and I enjoyed ourselves, though, sharing the usual caching anecdotes and bitching about the cold.

It's my favorite time of year, though somehow it just doesn't seem like I'm quite in the middle of it. For some reason, I never got Halloween out of my system and moved on.

Sometimes life is complicated like that.
Posted by Stephen Mark Rainey at 9:33 AM No comments:

The only good thing about having to get up at the ass-crack of dawn to go to work is seeing something like this when I head out the door. 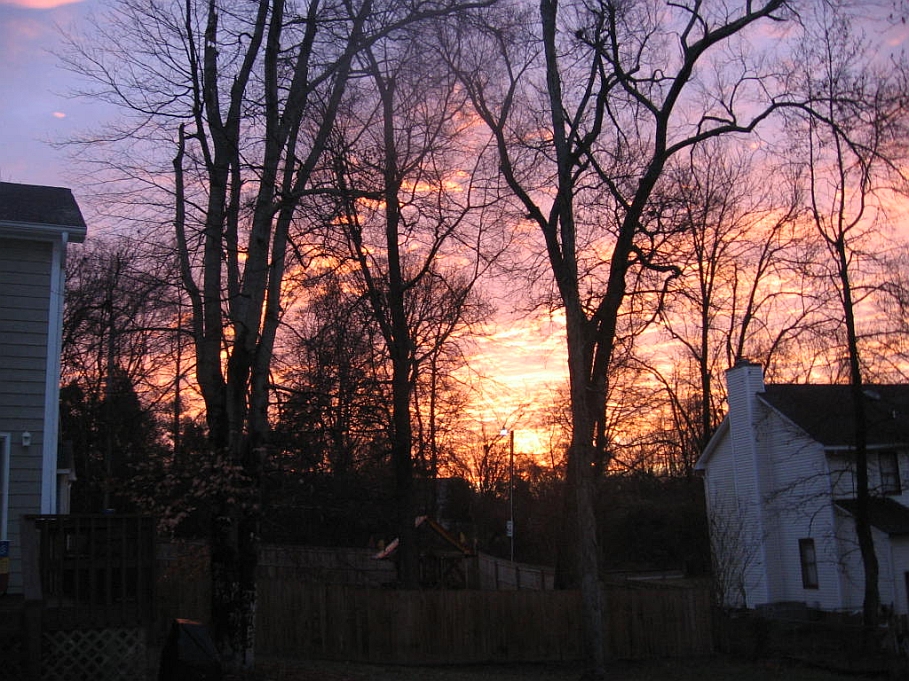 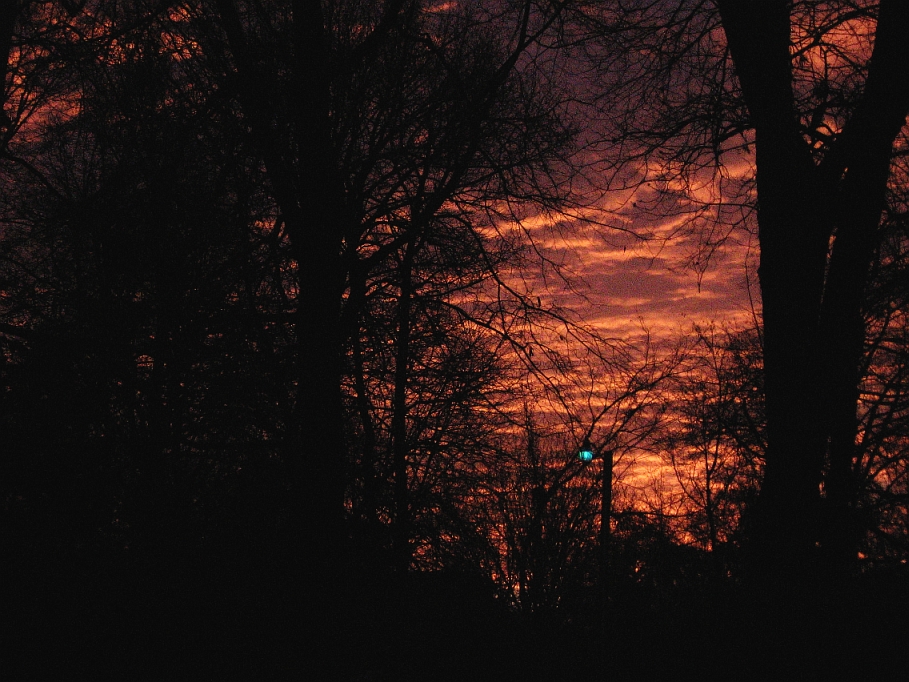 Posted by Stephen Mark Rainey at 11:32 AM No comments:

By the Light of the Silvery Moon

I first saw it rising above the trees at 5:35 PM from U.S. 68, right around Stokesdale, NC. Big old moon. Huge. Half of it blood red, the other half silver. By the time I'd gone ten miles farther north, the whole thing was silver. By 6:00 PM, it dominated the eastern sky. I don't think I've ever seen a moon so big and bright.

It was a memorable ride to Martinsville tonight. I stopped off to hunt several caches along the way, one of them being a ways out in the woods, in one of those lonely areas where you almost expect to hear a chainsaw starting up, and if you hear it, you know it's on account of you, and you don't have long to stay in one piece. Fortunately, there were no chainsaws, but I had no sooner found the cache when a low-flying black helicopter came buzzing by, only to stop and hover directly above me. I'm thinking great, the geocaching police are coming to get me, but after a time, it glided away, and I headed back toward my car. Just before I got there, two beautiful silver-gray foxes came out of the woods, gave me a brief look that said, "Oh, it's just some dude," and then wandered off. I've never seen foxes that close before, and I swear, they were the prettiest animals I've ever encountered in the wild. Caching has a way of taking me to places I've never been before and showing me things I didn't expect. I'm always glad for it.

I ended up spending a quality evening with my friends, the Albaneses, drinking martinis and watching The Horrors of Spider Island. The martinis, at least, were excellent. Afterward, I stopped at a couple of my caches to drop off travel bugs and geocoins, and the silvery moon was up there lighting up the very cold night. To get to the caches, I had to hike fairly short distances in the woods, but the moonlight was so bright it was like walking around in daylight. No need for a flashlight.

At the one called "Give Me Liberty," something was in the woods nearby. Don't know whether it was a fox or something else, but it sounded damned large. Bigfoot, I reckon. And silly me, I left my Jack Links beef jerky in the car. I wasn't the least bit nervous, though, as I did have a nice whacky stick, and the other — whatever it was — didn't seem to have a chainsaw.
Posted by Stephen Mark Rainey at 12:36 AM 2 comments:

You never know what you're going to find when you're out on the trail geocaching. This evening, I got together with a group of about a dozen cachers and hit the Greensboro watershed trails in search of a new and fairly complex multi-stage cache. It involved many miles of hiking, driving to several different trails, bushwhacking through some tough terrain, and, later in the evening, explaining ourselves to local law enforcement (again). Along the way to various stages, we picked up some other caches — one of which was hidden in the stylish conveyance you see above. The car is out in the middle of the woods, and there's no telling how long it's been there. Many decades, no doubt. How it got out there is really a question.

The lot of us started at for the big multi-stage at 6:30 PM and reached the cache called "Baby, You Can Drive My Car" around midnight, by which time our numbers had dwindled to three, with two stages of the multi left to go. Right about the time we found the car cache, a sheriff's deputy arrived to find out what folks were doing out in the woods at this hour. Turns out the officer was familiar with geocaching and, after making sure we weren't as dastardly as we surely looked, kindly wished us well on the hunt. Nice.

By now, though, I had one wet foot from a creek crossing gone slightly awry, it was below freezing, and my gloves had somehow taken their leave while I was in transit between locations (fortunately, I managed to find them). With several miles of hiking yet to go before the final stage, I opted to call it a night, and right now, I'm glad I did.

The technical term for it is "pooped."

The car pic is from the cache page and was taken by robgso.
Posted by Stephen Mark Rainey at 1:42 AM No comments:

...is the title of my latest short tale, and it's finished. Finally. Done by deadline. Now I've got two more tales to write, with two more deadlines. They're pretty generous, fortunately, what with the holidays coming up here.

"Demon Jar," my story featured at HorrorWorld during November, may still be accessed here: http://www.horrorworld.org/Rainey.htm

And the new issue of Cemetery Dance, #59, features my story, "The Gaki."

Lots of short stuff happening around here. Which is fine by me.

And don't forget Dark Shadows: The Path of Fate, my audio drama coming out very shortly on CD, from Big Finish.