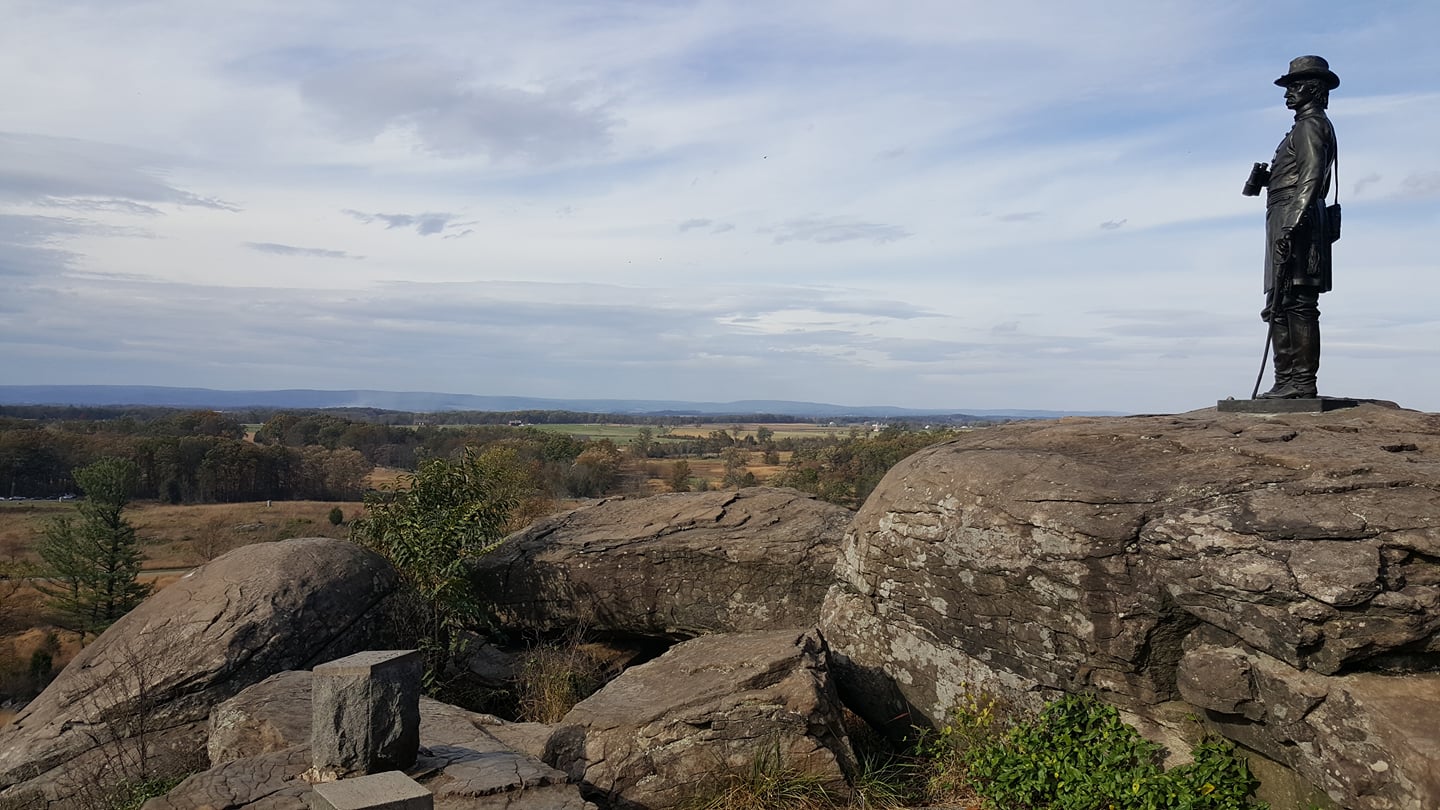 That was our trip to Gettysburg, PA, this past weekend. Generally around Halloween, Ms. Brugger and I go haunt someplace for a few days, and this year we decided Gettysburg would be the place, as neither of us had been there, and it appealed to our mutual love of history, beautiful settings, and autumn. It proved perfect beyond our expectations.

I believe you say "convenience store"—we lived above it.
Actually, not really; it was an apartment above a podiatrist's office we found on AirBnB, but it was attractive, well-stocked, and conveniently located in Biglerville, about ten minutes north of Gettysburg. We left Greensboro on Friday morning at the ass-crack of dawn, stopping several times to find some creative and well-maintained geocaches, reaching our destination late in the afternoon. We had already noted the locations of a few wineries in the area, so after ensconcing ourselves in our lodgings, we made The Hauser Estate Winery, on Cashtown Road west of Biglerville, our first port of call. We didn't quite know what to expect from Pennsylvania wines, so we tried several—a Meritage, a Pinot Noir, a Cabernet Franc, and a Cab Sauvignon. Of them, the Cab Sauvignon was the only one I'd rate quite highly, the others ranging from fair-at-best to decent, but the wine quality proved almost superfluous. The tasting room rests high on a hill overlooking the valley to the south, and the outdoor terrace provided the best possible location to enjoy a few spirits, as the temperature was balmy, the sunset spectacular. Now, inside, there was a DJ playing very loud 1980s music, which might have been off-putting had we been in the same room with it; however, for us outdoors, the sounds were muted enough to enjoy while still allowing us to carry on a conversation. Both Ms. B. and I would have preferred the smooth jazz/electronica so typical of our favorite NC wine-based establishments, but if the local patrons like what they're playing there, then so be it. We had a grand time, and I hope to have an opportunity to return. 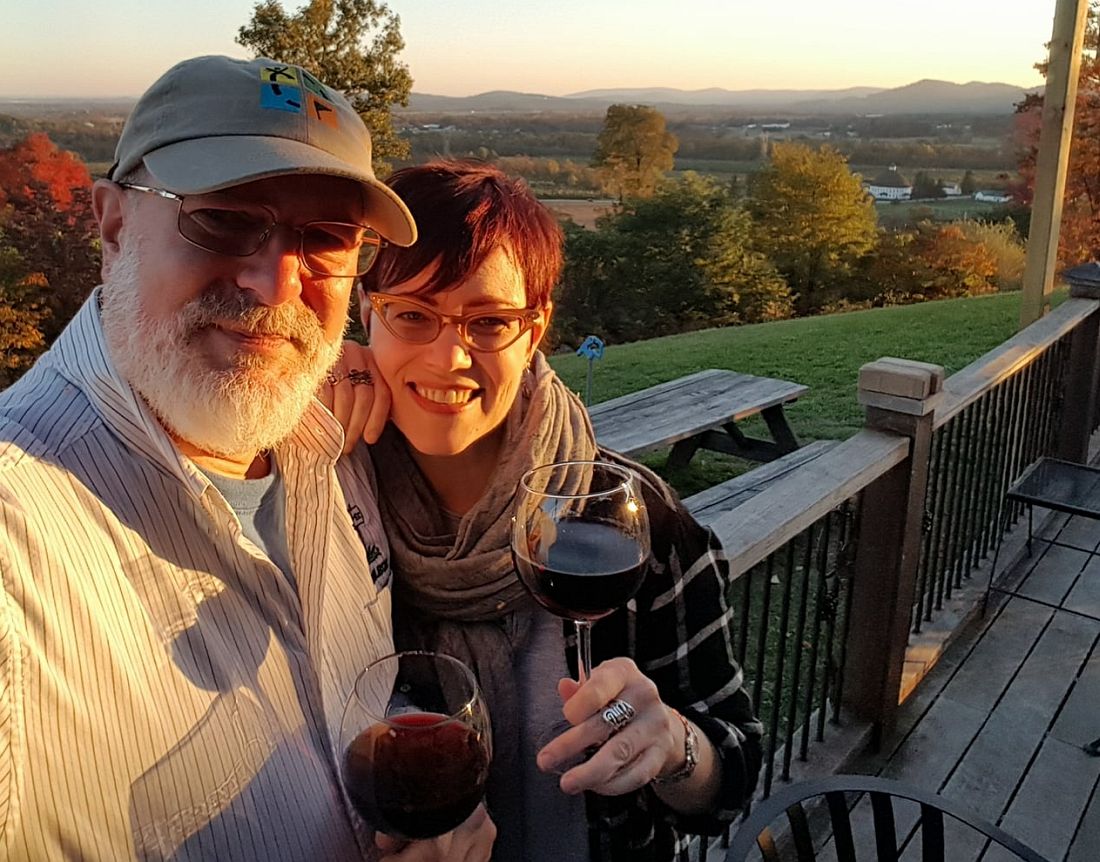 For dinner, we pounced on and conquered a pizza at La Trattoria, a decent little establishment a shorter-than-short walk from our lodgings. And for our evening's Halloween flick, we put on Jeepers Creepers, which, despite the deviant leanings of director Victor Salva, I've always rather enjoyed.

Into the Field of Battle

On Saturday morning, after making breakfast and bracing ourselves with plenty of coffee (frou-frou coffee for Ms. B., I am compelled to tell you), we spent some time wandering about in Gettysburg proper, which we found appealing, in that, while rather touristy, it preserves and showcases a lot of genuine history in its streets and shops. The geocaching proved particularly pleasant here (as well as on the trip in general), as all the caches in the area appear to be well-maintained by their owners.

From there, we headed down to the Visitor Center at Gettysburg National Military Park, where we availed ourselves to their film presentation ("A New Birth of Freedom," narrated by Morgan Freeman), and the Cyclorama, which features a 360-degree, 40 foot-tall painting of the field of battle rendered in the 1880s. It was an informative, illuminating intro to our day in the park. The official automobile tour takes you on a journey of 24 miles around the battlefield and runs about three hours, which I'm sure we would have enjoyed, but we preferred to spend the day on our own, which turned out to be a deeply moving experience for both of us.
Because there were several virtual caches and Earthcaches at the locations, our primary targets were Devil's Den and Little Round Top, which we enjoyed exploring in considerable detail while searching for the information needed to claim the caches. One of the neat, non-battle-related items we found is a name engraved in the rocks at Devil's Den—"P. Noel"—which has a ghostly legend surrounding it. As the story goes, a young girl who lived in Gettysburg was thrown from her wagon, entangled in the wheels, and decapitated. Legend has it that her headless ghost may occasionally be seen wandering the battlefield. According to the story, the girl, while searching for her head, burned her name into the rocks with her fingertip. It is said if you trace the carving with your own finger, you will suffer serious misfortune. Now, I'll tell you, if a ghost engraved that name in the rock, she has one serious grip on typography and engraving. Just for good measure, I did indeed trace the letters with my fingertip, and I trust I have broken the curse for the benefit of future sightseers/geocachers.
Bivouac

We had brought our own provisions for a midday repast, and we chose for our bivouac a cluster of boulders in the wooded area near "The Wheat Field," along Sickles Road, a location marked as the encampment of the 18th Massachusetts Infantry. It was a beautiful, secluded site on high ground that would have provided natural cover against attack, which no doubt occurred at that very spot on 2 July, 1863. Spending time on our own, on this particular ground, struck us as at once somber and exhilarating. I can't help but wonder how the men who fought there might feel knowing that what they did, in some fashion, played a part in shaping a future where Ms. B. and I could sit in that very location and enjoy the beauty of the setting in peace and relative tranquility.

The search for strategically placed virtual and Earthcaches took us to Little Round Top, where we went among the monuments and explored the woods where Colonel Joshua Lawrence Chamberlain's 20th Maine Regiment successfully fended off repeated attacks by Confederate infantry at the southern end of the hill on 2 July 1863. Once again non-battle-related, one of the Earthcaches we sought took us to a wall constructed of fossil-laden rocks, one of which is the very clear track of an atreipus milfordensis, a dog-sized plant eater which roamed eastern America during the Triassic period, some 220 million years ago.
One of my favorite discoveries was at a virtual cache called "High on Longstreet" (GC8808): a 75-foot-tall observation tower that overlooks the battlefield from the west, which we climbed (with some strain on the old knees) while being battered by intense winds that had picked up during the afternoon. We spent a good while up there, enjoying the view and trying to keep from being picked up and whisked to the farthest reaches of rural Pennsylvania. Afterward, we made another climb into the higher altitudes, this time at the State of Pennsylvania monument on Hancock Avenue, along Cemetery Ridge. I did so love the views these heights afforded, not to mention all the hugs Ms. B. and I got trying to keep each other from flying off somewhere.
Spirits and Shellfish
Upon our departure from the battlefield, we headed back into Gettysburg to grab a few caches, drink some wine, and hunt down the evening's vittles. We found the perfect dinner spot at Garyowen Irish Pub, which was packed (as was just about every establishment in town on a Saturday evening), but we managed to find a cozy spot at the upstairs bar, where we fixed ourselves up with some excellent spirits, plus fish & chips for Kimberly and a dozen oysters on the half shell for the windblown old dude. This was the standout meal of the trip for both of us, and it's a place I really, really want to revisit on a future trip. It will be getting a fine Yelp review from me, to be sure.

For afters, we walked over to the nearby Knob Hall Winery, which is actually a Maryland-based winery, but they have a nice tasting room in downtown Gettysburg. Here, we found a fairly large selection of red and white wines, of generally high caliber, a Chambourcin Reserve being the best of them—almost ironic, as in NC, Chambourcins are ubiquitous, but rarely superlative.

And to round out the evening, we followed up our previous night's movie selection with Jeepers Creepers 2, which, like its predecessor, makes for an entertaining Halloween flick.
Monsoon!

Happily, the weather for our Gettysburg sojourn turned out just about perfect, if a little lacking in fall color (we're expecting the foliage to change somewhere around Christmas, at this rate). Sunday, though... holy godz, what a gullywasher. Almost the entire trip home, the rain came down in blinding sheets, which resulted, at times, in a thoroughly drenched old geocacher. Well, OF COURSE I went after some caches, I was on a freaking road trip, what can you be thinking? Our most amusing stop was probably at Mister Ed's Elephant Museum and Candy Emporium on the Chambersburg Pike because... well, because it's an elephant museum and candy emporium.

To end the journey on a high note, in Reidsville, we diverted ourselves to The Celtic Fringe, one of our longtime favorite restaurants. Here, Sazerac and bangers & mash for me, and bleu cheese/grilled chicken salad for the lady.

And so now, after one of the most wonderful trips I think I have ever taken, Halloween lurks around tomorrow's corner, and I will be out and about menacing the population. I've got the costume together, and I suspect some folks at the office tomorrow may suffer for it.

Gee willikers, you guys know how to enjoy life!!