I Owe the Author a Drink... 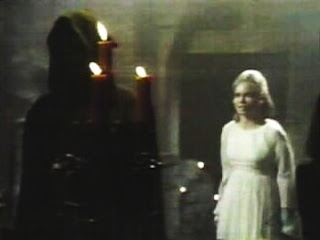 The Dark Shadows audio drama I wrote, The Path of Fate, is now officially available from Big Finish. It's the first time something I've written has been performed professionally, so I've been eager to hear how the finished product compares to what I heard in my head while composing it. I listened to it for the first time this morning, and by and large, it's pretty true to my original mental construct. Some aspects are, as expected, rather different, but its most intense moments are perhaps even more intense than I might have expected. As it moved toward its climax, I found myself going "Whoa." And I mean, "WHOA!" The actors (David Selby and Lara Parker) really gave the drama a fine treatment, particularly in its more, uh, energetic passages. While I can't exactly put myself in the position of a listener experiencing the story for the first time, I was able to listen to at least portions of it in the company of a partner at the office — an old-time Dark Shadows fan, at that — who was experiencing it for the first time.

Like anything I've written, Dark Shadows: The Path of Fate will have its admirers and detractors, and that's all fine and as it should be. How ever it's received by ye audience, to me, it's kind of a landmark in the ol' career.

So I consider that martini at least reasonably well-deserved.

I'm looking forward to hearing this. You know I've always been a fan of this franchise.

DARK SHADOWS is the only franchise I could write for that comes close to satisfying me as much as any I might create on my own. While media tie-ins might not be every writer's cup of tea, to me, working in the DARK SHADOWS universe is like working with an old friend. That would not be the case with any other property, I don't believe; not even Godzilla.

Holy cow, I can't believe I said that.