Fireman in the House! 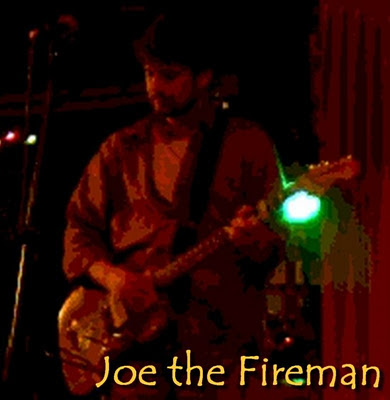 Blogging, Facebooking, My Spacing, Tweeting, etc., etc., have not entirely slipped out of my repertoire, but daily activities and responsibilities have relegated them to a less-than-prominent role in the schedule. So I hope there's a soul or two out there still giving the old blog a look-see now and again, as I do like to post a little note here from time to time—even if it's just to jog my own fawlty memory when I try to recollect events from more than a few hours ago.

I'm a day late posting an entry I don't want to let fall by the wayside. Wednesday night, whatever date that was, I drove over to Winston-Salem to watch a performance at the Garage—a neat little hole in the wall that offers a showcase for a lot of local talent. It was a 20-minute set by a strangely familiar-looking dude who, on stage, goes by the name of Joe the Fireman, though who, in day-to-day life, goes by the name of Phred—which to some might seem odd since his actual name is Alan. (I hope to his fans that this is not a shattering revelation.) Yeah, he's my brudda.

Over the years, I've watched Phred develop as a serious musician—just as he's seen me grow as a writer of scary fiction. He makes a fair racket with that guitar and voice of his, and he's been known to wail out some original tunes that are heartfelt, personally revealing, and musically haunting. I've seen him play, like, lots, but the other night, I saw a truly professional, dedicated musician with a stage presence that captivated everyone in the place. This ain't just tooting the boy's horn, as I imagine you're aware. Anybody who's read my views, here or elsewhere, on the creative output of others, be they friends, relatives, foes, or otherwise, know they can expect from me an honest appraisal. It's safe to say that, in his old age (or is it my old age?), Phred has really come into his own as both a composer and performer. He brings with him a touch of Neil Young, Michael Stipe, Lou Reed, Colin Meloy, and even Springsteen (on thunder-stormy days, anyway). I was taken enough with his work several years ago to include lyrics from a couple of his songs in my novel, The Lebo Coven.

I'm sure they love him at the Garage as he brings them in a fair bit of business. If you're anywhere within range of the NC Triad, keep an eye out for where he's going to be and then come for a visit. You can listen to Phred/Joe/Rainey the Younger at MySpace Music, here: www.myspace.com/joethefiremanmusic

Bad thing did happen to me coming back from the show, however. I stopped off to grab a few geocaches, and one of them was behind Taco Bell. Now, I haven't been to Taco Bell in probably five years. Swore off the stuff, even. But it was going on midnight, and before I knew it, my car had pulled into the drive-thru and ordered a soft taco. Now I tell you, people, I took that soft taco, went and parked near the next cache, and I commenced to eating. Oh my lord, and this is tearing me up, it was good. I was out there hollering, signing the cache log, and praying to the good lord that I don't develop some kind of new, horrendous addiction, as there's a Taco Bell not that far down the road.