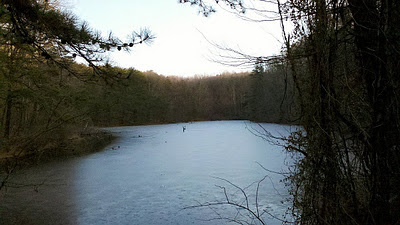 Confession is good for the soul, so they say, and maybe today a good unloading is in order.

Back behind Martinsville High School, my old alma mater, there's a fairly extensive woodland area, and in the middle of it, a medium-size pond, which I've always called Black Tooth Pond. Now, that's not its actual name, if it even has one; I coined it because, at the pond's southernmost end, a large number of broken, blackened tree trunks once protruded from the water — probably the result of a fire from many years ago. If you've read certain of my short stories, you might recall I used this exact setting, and the name Black Tooth Pond for the first time, in "The Weird Violet," which appears in my short-fiction collection, Fugue Devil & Other Weird Horrors (Macabre, Inc., 1994).

From the get-go, Black Tooth Pond was for me a place of higher learning. In 11th grade, circa 1976, my biology class hoofed it down the old dirt road to the pond and took samples to test for water quality. Later, I furthered my education here with a select number of female specimens of the species. Not long afterward, I returned to the area to conduct experiments with certain chemical substances, the results of which are in some cases hazy. When I first started geocaching, this was one of the spots I seriously considered for placing my first hide, but I never did get around to putting one here. Alas.

But let's backtrack a little ways. It was my senior year in high school. I was dating a singularly appealing young woman, whose aplomb with certain physical exercises left me very much in a state of awe. As with most teenagers, one of the biggest hindrances to practicing these exercises was the lack of a setting that offered even a modicum of privacy. As you have astutely deduced, we found such a setting back in the woods by Black Tooth Pond.

At that time, my folks owned a 1970 Ford LTD station wagon, and if you grew up anywhere near the same time I did, you'll know that this was the perfect vehicle for conducting highly specialized scientific experiments. One evening right around Halloween, this young female specimen and I drove down the treacherous dirt road into the woods around Black Tooth Pond and proceeded to practice some of the exercises mentioned above. Well, we had settled ourselves in the back of the station wagon and were just getting ourselves prepped to exercise when we heard the distinctive sounds of footsteps in the woods, not very far away. Being a little nervous about doing scientific research on what might be someone else's property, I opted to withdraw from the position I'd gotten myself into, open the back window, and thoroughly evaluate the situation.

I suppose it's lucky I did.

There, about fifty yards away, starkly silhouetted against the purple twilight sky, was the distinct figure of a man traipsing toward the car, a rifle or shotgun clearly at the ready.

With a holler that likely shattered my test subject's eardrums, I unceremoniously abandoned the experiment at hand, vaulted over two seats, and within three seconds flat had that 1970 Ford LTD station wagon hauling ass down the treacherous dirt road, back toward the high school — or at least, that's what I hoped. Problem being at the time, I wasn't exactly sure which direction I had to go. I mean, we didn't have GPS technology in those days, and I had been paying attention to other things while navigating those winding little roads....

Then it happened: Ba-BOOM! Pothole! Big, big pothole! The rear tires left the ground more than once, and as the car bounced violently, I saw in the rear-view mirror something metallic go flying into the air.

The license plate. My parents' license plate. Even in my panic, I had the presence of mind to realize that that was one damning piece of evidence. Then and there, I had to make a decision: face a potentially homicidal maniac with a gun or my dad's wrath.

Obviously, there was nothing for it but to stop and retrieve the wayward item. I reluctantly slammed the car to a stop, praying I hadn't busted any axles, leaped out the door, and ran back to find the license plate. There it was, lying in a pool of mud. I grabbed it up, paused long enough to take stock of the situation, and — much to my horror — heard footsteps in the woods, making a beeline toward me. Running toward me.

Damn. Back into the car, and off we went again, and... somehow... before I knew it, I was out of the woods and back on the road that led to the high school. From there, I'm certain I broke every traffic law in existence returning the subject of that experiment to the safety of her home; privacy be damned.

Before heading back home, I was able to re-attach the license plate (after much scrubbing of mud), and it's only by the grace of God that I hadn't completely screwed the car's alignment. Indeed, they made those cars durable in those days. I can only imagine trying to undertake such a panicked escape in my current Buick Century. I'd be leaving pieces of that car strewn all over Martinsville and Henry County, and maybe beyond.

So, one scientific experiment a massive failure. Despite it all, I still have a great fondness for Black Tooth Pond. However terrified I might have been at the time, it didn't stop me from conducting further experiments in those woods, all of which certainly contributed to my well-rounded education.
Posted by Stephen Mark Rainey at 5:31 PM

Well, since you obviously have a modern photo of the pond, are there any homes near it? Is it, in fact, private property?

I -think- it's city property; there aren't any homes very close by. Just nice woods — though there are remnants of some -very- old buildings back there, like an old auto mechanic shop and the foundations of what must have been private homes. Clearly, at some time in the past (I'm guessing early-to-mid 20th Century), there was more human presence there than in the past 40 years. Some of the woods near the area are obviously private property and are marked as such.

The old dirt road is now blocked with a nice yellow gate, although I didn't try to get in from the other direction..Black Tooth Pond is Lester lake, with its littlr pull-off, and I know of the pothole! Spent many hours quenching my thirst in the old concrete building with all the holes in the floor..there aren't any houses within sight of the lake, and are several dead-end dirt roads, one of which I was parked on one night in the late 70s..I was sitting there hand-rolling a cigarette when I heard the sharp report of a shotgun nearby, and the back of the car dropped..scared us half to death even in our state of inebriation..looking for the guy with the gun..the blast was a rear torsion bar on my VW breaking,, I drove it like that for two days, with the rear end all lopsided..thanks for the memories!