Any weekend is a good weekend for geocaching, and on this one, the caching was good indeed. Lots of high-quality hides — from Siler City to Sanford to Pittsboro, from underground to far higher than folks rightfully ought to put their feet. Saturday, Bridget "Suntigres" Langley and I got together and headed south toward the Devil's Tramping Ground, not far from Siler City. Several years ago, I had gone there in what proved a vain attempt to make the cache there my 2,000th find, and again the following year to hunt a most excellent night cache ("Hell on Earth," GC1GZNP). My target, "Devil's Caching Ground" (GC1GKYR), missing when I had previously hunted it, had been replaced, and yesterday's hunt proved successful, making it find #6,499. Thanks to some ornery briers, I managed to shed some blood at Tramping Ground, so there's no telling what evil may result. Beware. After that, we targeted several other well-conceived hides, such as "True Love Always" (GC3CEMX), a very engaging multi, and "Sanford's RbC" (GC2BM3B), which allowed me to enjoy some deep, deep shade on a ridiculously warm December day.

No sleeping in this morning. Up before dawn to meet Rob "Robgso" Isenhour to head over to the Haw River, near Pittsboro, where we joined a group of about 18 folks for a hike along the rather rugged, exceedingly scenic river trail. Rob and I had gone caching there several months ago, along with Shoffner (a.k.a. Cupdaisy) but had been unable to find four out of ten bison tube hides along the trail. This time, with all those eyes and tactile appendages, we were able to find those and make a clean run of the series. The Haw River in this area is wide and very rocky, the west side oftentimes very steep and strewn with giant boulders. The climbing is strenuous, but the views are often spectacular.

One of the caches we visited involved walking across a narrow dam for fifty or sixty feet to reach an old pump house. Audra "Homestyle" Webb and her son, Zachary, were frothing at the mouth to undertake this particular terrain challenge, so off they went, accompanied by Lonnie "MBD" Drain for moral support. It took a bit of time, but they finally managed to find the cache, and they made the crossing both ways without ending up as fish food. Good for them, bad for the fish. Sorry, fish.

The hunt for what turned out to be my favorite cache of the day — "TowerLand" (GC235TA) — took us to an old fire tower just outside Pittsboro. Posting here that the cache is somewhere on the tower spoils nothing, as the cache page itself gives you a fair idea of the sort of challenge you face. The tower has clearly stood there for many, many years, and it's seen better days. Just getting to the level where we might begin our ascent in earnest required some serious effort, and a few of our number inadvertently provided some entertaining acrobatics both coming and going. After finding the cache, some of the crew continued all the way to the top; I opted to forgo this particular pleasure, mainly because, every now and then, MBD would give the tower a good shake, and I was never quite certain the whole construct wasn't going to come crashing down. At any rate, it was on our party's descent that the real entertainment began. A couple of the climbers, whom I will call Karen "e-bird67" Grigg and young Homekid, absolutely could not find their way off the tower. Coaching, coaxing, cajoling, pleading, and threatening proved ultimately useless. These poor souls may yet be up there, soon to become mere skeletons swaying in the breeze to warn others from undertaking such frightfully energetic adventures.

Do beware, and have a happy and safe holiday season. 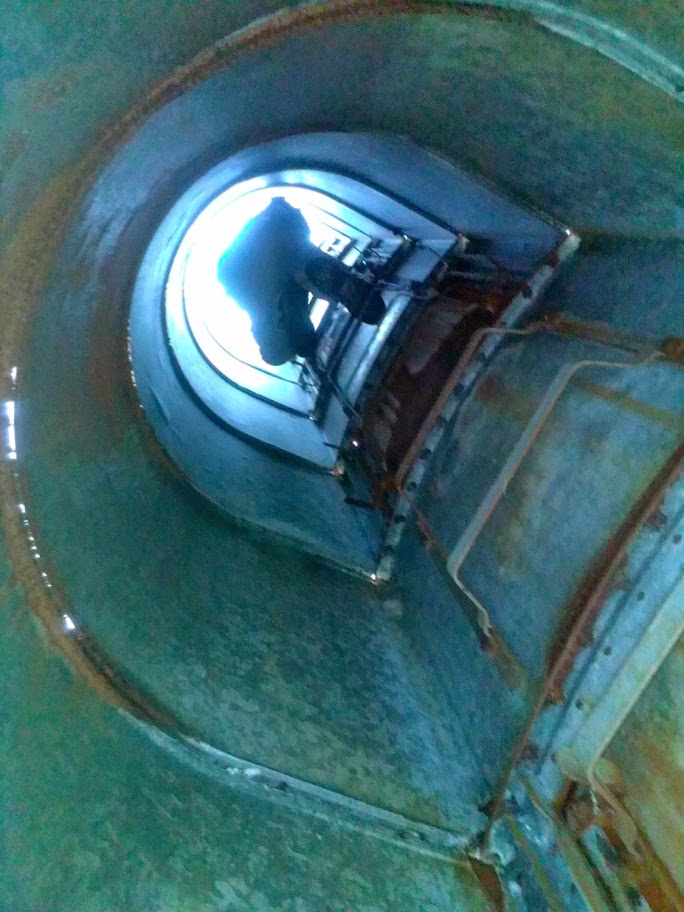 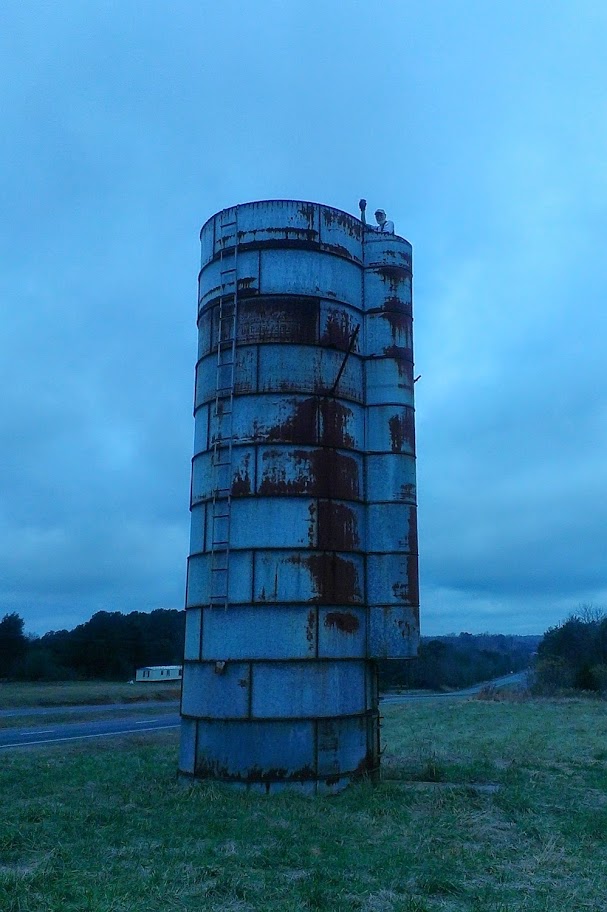 "Mom! Uncle Rob is getting high!" 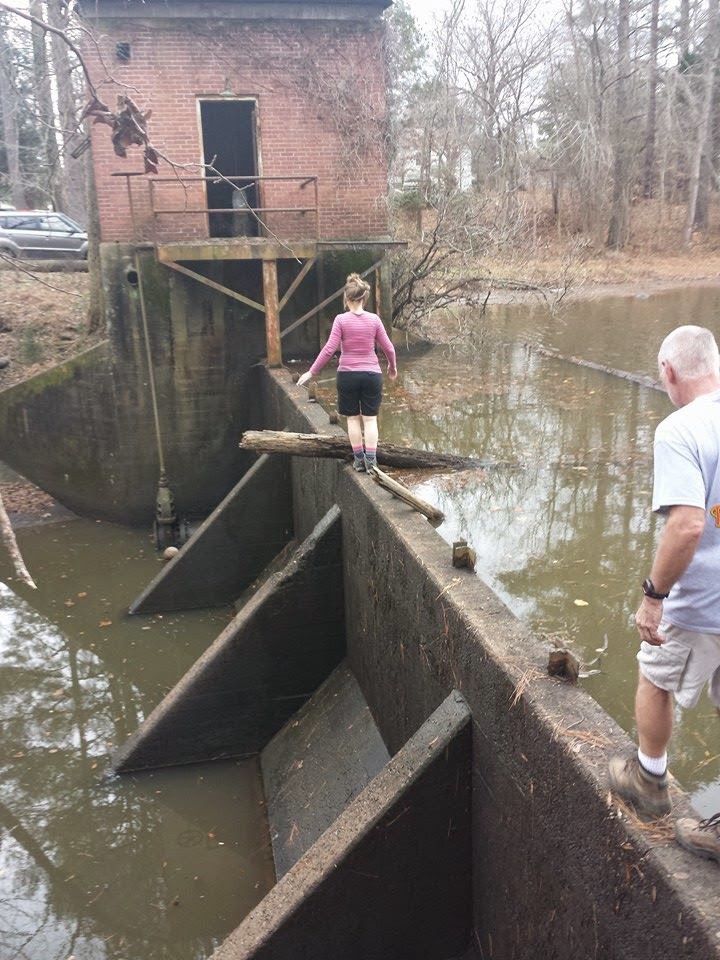 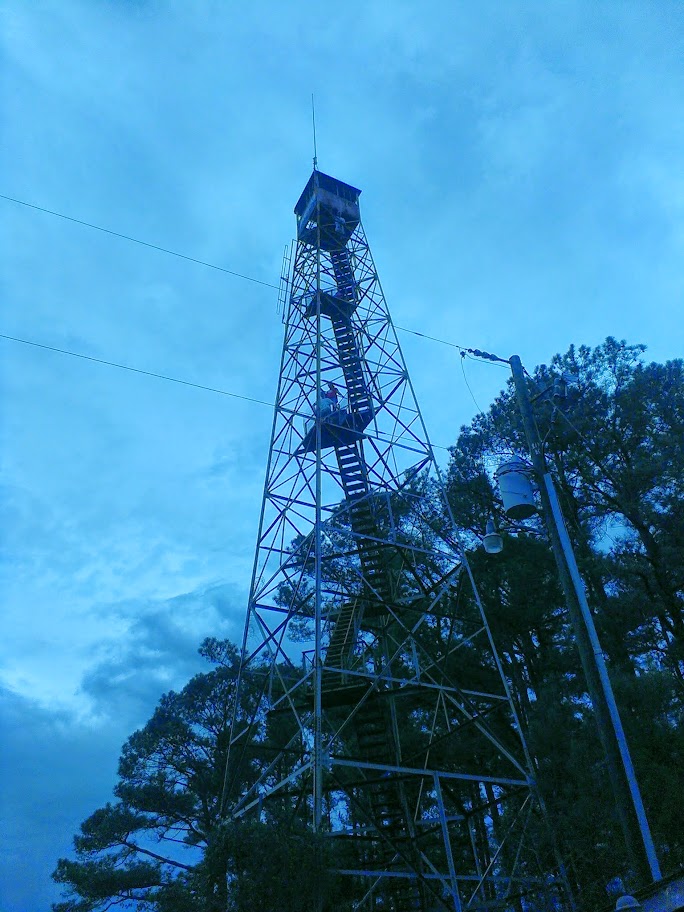 L: Audra and Lonnie make their way across the dam to find the cache. R: Rocking the tower!