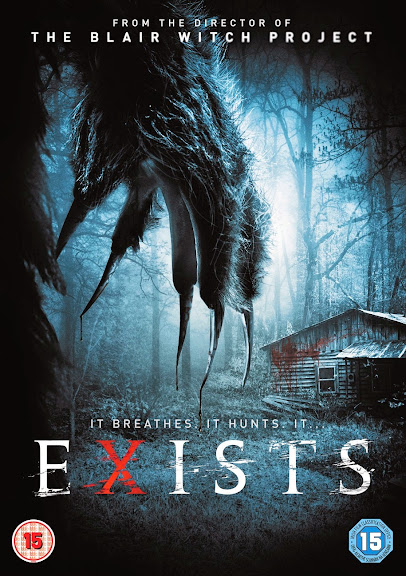 I've gotta tell you, I'm a sucker for movies about Bigfoot and other cryptozoological beasties. During my teenage years, it was a rich time for all things Bigfoot, with movies such as... wait for it... Bigfoot, with John Carradine (surely one of the world's worst movies, yet such an all-fired hoot I can't help but love it); The Legend of Boggy Creek; The Creature From Black Lake; Sasquatch: The Legend of Bigfoot; et. al. Exists hearkens back to just that kind of movie — both hokey and creepy as all get-out. It's directed by Eduardo Sánchez, who brought us The Blair Witch Project and others some years back. Not unlike Blair Witch, this one is largely seen through the eyes of various cameras — Go-Pros, cell phones, and such — though it isn't found-footage per se. The camera's eye views are not as erratic and shaky as Blair Witch or Cloverfield (the latter of which I refuse to watch again because the shaky-cam footage isn't just overdone, it's stupidly overdone). Exists, fortunately, is largely shown through a more traditional camera lens and features an honest-to-god score, composed by Nima Fakhrara.

The story is classic drive-in movie fare: five young adults — brothers Matt (Samuel Davis) and Brian (Chris Osborn), Dora (Dora Madison Burge), Todd (Roger Edwards), and Elizabeth (Denise Williamson) — take a weekend trip to a remote cabin, located somewhere in the wilds of eastern Texas. On the way, they run over some critter, which they take to be a deer until they discover some odd hair stuck in the radiator grill. It isn't long before something begins making scary squalling sounds out in the woods and then comes prowling around the cabin. Next thing you know, said something has smashed the youngsters' car, leaving them stranded and all but helpless. Matt decides to try fleeing on a bicycle so he can bring help. Alas, he never reaches his destination. And the remaining four young people become subject to a relentless assault by the thing — or things — out in the woods. There is much destruction, screaming, hollering, and even some blood. These young 'uns at last realize that their chances of getting out of the woods alive are mighty slim.

The wooded setting and cabin couldn't be more conducive to frightening things happening; happily, it's all filmed on location, without any dopey-looking sets or crappy CGI. There's an atmosphere of both serenity and strangeness about the woods that couldn't be more genuine. (As a matter of fact, the woods closely resemble those around what I call the Bigfoot Trail, just a few miles up the road, where I've done quite a bit of geocaching over the years.) Until just about the end of the film, the critters are shown only in silhouette or in quick cuts, and one scene, in which the monster is seen as a black shadow racing through the woods alongside a trail in pursuit of Matt on his bicycle, is actually pretty hair-raising. When, at the end, we have the big reveal, it's not disappointing. It's pretty damned good. I'd go so far as to say Exists offers a few of the best-staged Bigfoot scenes, well, maybe ever.

What Exists also offers... unfortunately... is a great big nasty-tasting, nausea-inducing, brick shit house full of stupid. Oh, my lord. The characters, to the last, are obnoxious, ever-swearing, hyper-screaming, pot-smoking, stereotypical boneheads who can't formulate a rational thought even when they're not panicking, and there's more than enough panic going on here for about four movies. Yes, it may bloody well be true that in highly stressful, likely deadly situations, many people will, in fact, lose their shit. But I think that segment of the population has been more than adequately represented in horror movies over the years, and I am weary beyond weary of them. (And even most of them would have a fair idea of when to actually get rid of the Go-Pro.) Why not make a movie with the same scenario but with characters who, between them, have more than a single functioning brain cell? Or at least make them colorful. Ever see Creature From Black Lake, with Jack Elam, Dub Taylor, Dennis Fimple, and John David Carson? Talk about enjoyable characters. Dopey, maybe, but what hoots! In The Legend of Boggy Creek, we have plenty of not-necessarily-bright characters, but the audience never looks down on them. They're kind of charming in their way. Hey, Travis Crabtree even had his own ballad written about him. It doesn't get much more charming than that. I tell you, the world is dumbed down aplenty as it is, and Exists, despite so many wonderful aspects that work, is insulting to an even marginally thinking audience. Mr. Sánchez, is it really, really true that your film won't make a buck unless your characters are idiots?

That doesn't even begin to cover some of the contrivances, the hackneyed plot devices, and the almost note-by-note reproducing of scenes from The Blair Witch Project. Even these would be somewhat more palatable if it were possible to give a hoot about the people on the menu.

Shame on you, Eduardo. Shame on you for taunting me with all kinds of goodies and then throwing a rancid pie in my face.

Dang! That kid's got a Long Tom shotgun just like the guy in my novel THE LIVING END!

I might see this film. Your review does leave me some comfortable room to avoid it and not feel too sorry for doing so.