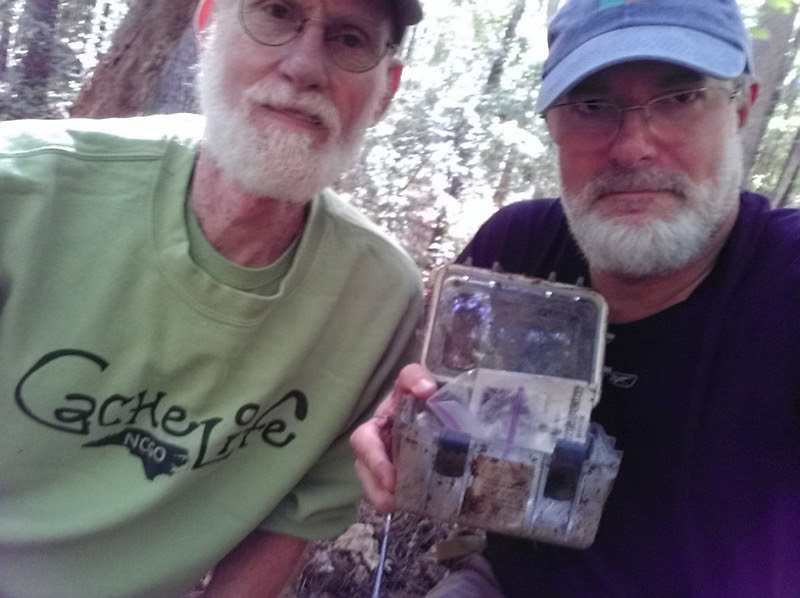 This one is all about the geocaching, but whether you're into the activity or aren't, feel free to read along.

From almost the time I was the greenest of geocachers, "Vanishing Point" (GC1Z6RM) has been my arch-nemesis. I must confess I found it in the most roundabout way possible, and only after several years of trying.

This is what happened....

About four years ago, I had planned to hide a cache near, but not on, one of Greensboro's watershed trails. I had constructed a unique container, located an excellent hiding spot, and actually placed the cache. However, as I was making my egress from the woods, I came upon a camouflaged packet containing only a photograph, about 200 feet from my new hide. I realized I had stumbled upon a stage of a cache, but I didn't know which cache. I suspected "Vanishing Point," since I had already found most of the other puzzle and multi-caches in the area, but I didn't know for sure until I began making some queries among other geocachers. Sadly for me, my new cache was too close to this physical stage, so I went back, removed it, and ended up using that container for another cache in that area.

It was not long after finding the packet that I realized I had made a critical error: I had left without marking its coordinates on my GPS (a clear example of brain death on old Rodan's part) so that I could go back and make use of the information it contained. When I learned that my discovery was, in fact, the penultimate stage of "Vanishing Point," I decided to return to the site of my ill-fated hide, attempt to retrace my steps, and perhaps find the packet again. Over the next couple of years, I came back to the area numerous times, spending lord knows how many hours hunting my quarry, always in vain. It became something of a personal mission for me to find the final stage based on that fateful accident rather than by working on the cache from scratch — a process involving finding numerous other stages and sorting out puzzles, which might be a daunting, perhaps impossible task since the cache owner is no longer active.

I never was able to locate the packet again; I'm fairly certain that, over the years, it must have fallen (or was taken) from its hiding place, and that it is no longer there.

Eventually, from a couple of previous finders, I received some useful intel about the final stage, and I returned to the woods on at least three occasions, spending countless hours at a couple of likely hiding sites, dividing my time between searching for the final stage and that confounded packet, which I knew could help me close in on the correct hiding place. Each time, I ended up leaving empty-handed.

Today, however, "Bloody" Rob Isenhour — one of the group who had last found the cache, back in 2010 — offered to accompany me on another hunt, though it had been long enough since his finding it that even he wasn't certain where we ought to search. In looking back at previous finders' logs, we discovered a clue we thought might assist us, if only we could decipher it. Much to our joy, in the end, we did. Yet, even then, as we went back and forth over a particular section of woods, scrutinizing its every inch — one of the areas I had meticulously searched on several previous visits — it appeared the effort was again going to come to naught.

At last, however, with the two of us literally crawling over the site we knew had to be the correct ground zero, we turned up the cache. More specifically, Bloody Rob turned up the cache, though his previous experience finding it proved to be of only marginal assistance. But to finally have this one in the bag is, for me, a substantive victory, and, quite frankly, I don't know whether it's possible to locate the final stage as the cache owner actually intended. If that packet is gone, my guess is that so is any hope of making the find by starting at stage one.

Afterward, Rob and I treated ourselves to a keen lunch at Mexico Restaurant, and then we had a puzzle cache to solve down at the University of North Carolina Greensboro. The listing — "Elizabeth Teaches Alexandria the Violin" (GC6264J) — had popped up this morning and appeared to be an intriguing combination of decryption and detective work. At the first stage, just outside the music building, it turned out that we did have a code to decipher, which we managed to do with relative ease ("relative" being the operative word). Heading to the next location to discover whether we had solved the puzzle properly, we ran into our old pal (and also arch-nemesis) Tom, a.k.a. "Night-hawk," who had also beaten the cipher and was on an earnest hunt. Putting our heads together, we figured out what we had to do from there, a step that Tom facilitated by turning on some of his legendary charm. (Note: the degree of sarcasm employed in that last sentence I leave for the reader to determine.) Happily, the cache proved to be quite ingenious, all the more so since the hider appears to be new at the game.

Anyway, a fine day on the caching trail to be sure, and now it's back to doing a spot of revising on my novel, Blue Devil Island, some news of which I will be announcing in the near future.

Happy landings to you.
Posted by Stephen Mark Rainey at 6:06 PM

You have to be the most determined geocacher in the history of geocaching! I salute you and your relentlessness!

I hope you signed my name!