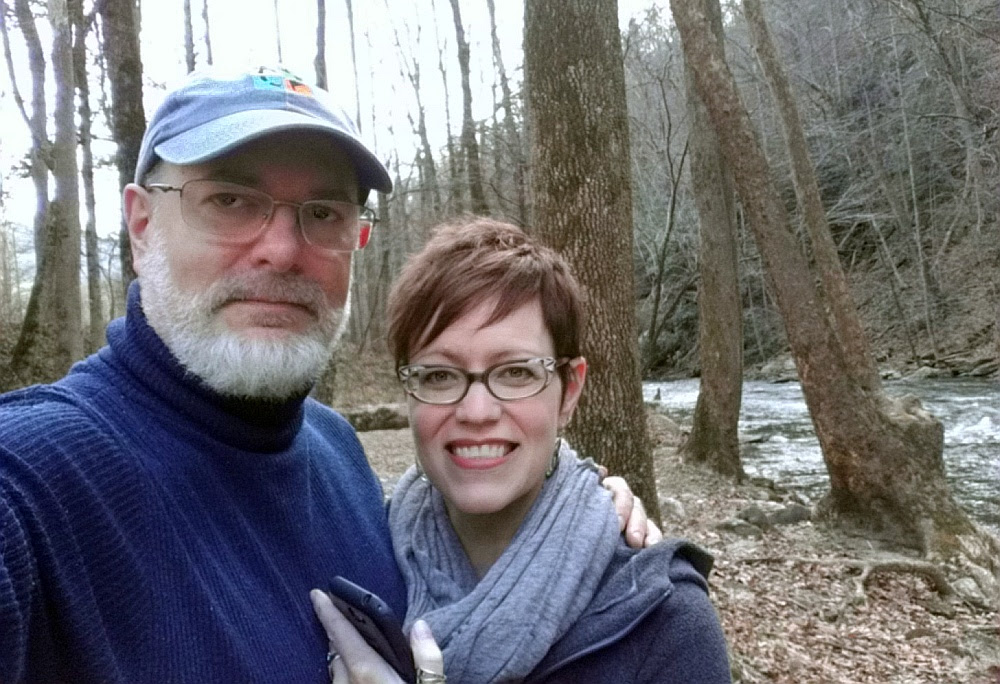 For me, Black Friday is the day to stay the hell away from any population center, particularly anything resembling a shopping area, and there is geocaching traditionally involved. This year's Black Friday was no exception, and it was, in fact, one of the most enjoyable such days in years — probably since 2011, when Ms. B. and I ventured out to the countryside around Smith Mountain Lake, Virginia, to escape the Shopping Dead. Yesterday, we determined that a spot of wine and decent food would be a welcome switch from the spot of wine and decent food we'd been made to suffer on Thanksgiving, the day before. Thus it was off to Villa Appalaccia Winery (for that spot of wine) and Chateau Morrisette (for the decent food) in the Blue Ridge Mountains, by way of Kibler Valley, where a wunnerful little geocache called "Trout Slayer" (GC102WQ) awaited my attention. Once again, geocaching took us to one of the most beautiful, secluded little corners of the earth that we would have never otherwise discovered. 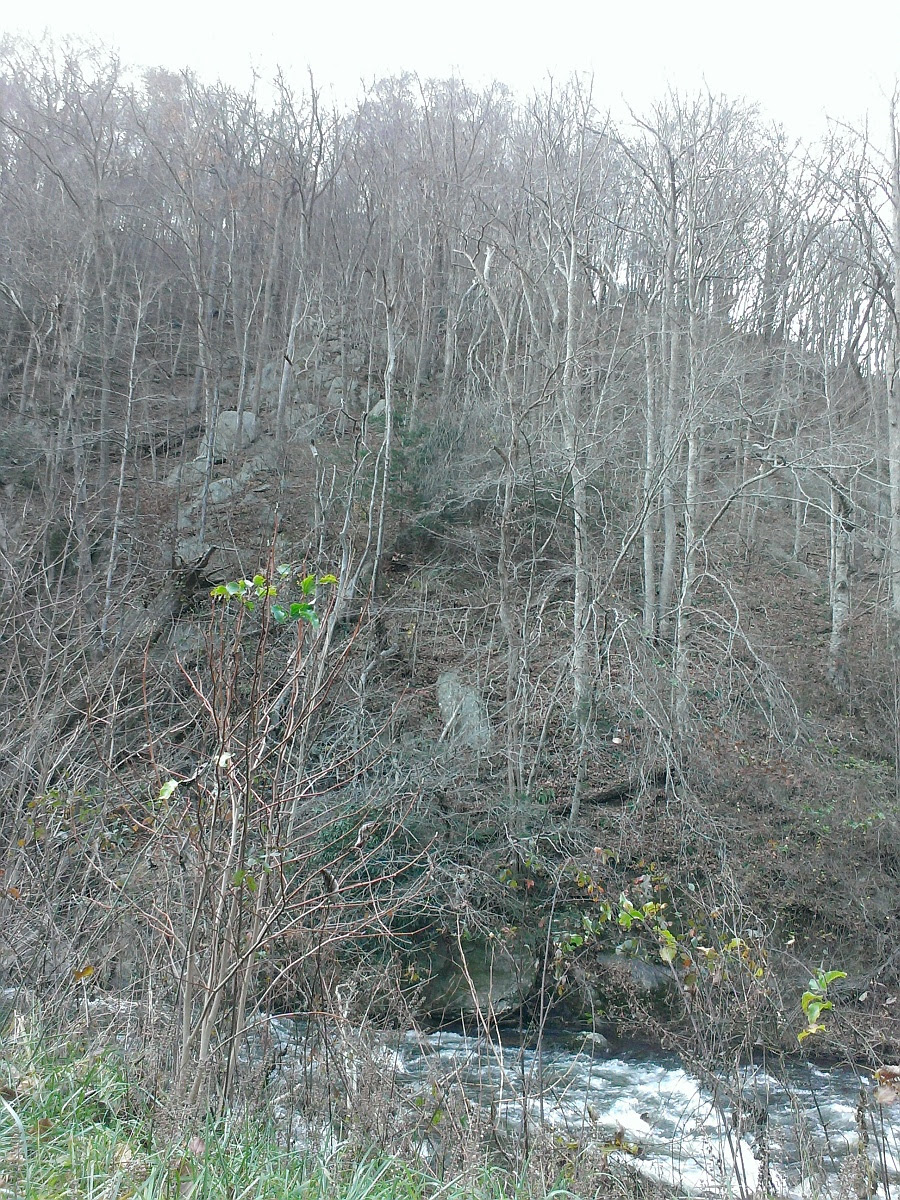 Kibler Valley is located in Patrick County, Virginia, just north of the North Carolina state line, a few miles southeast of the Blue Ridge Parkway. The Dan River passes through the valley, and, somewhat surprisingly, a hydroelectric dam here provides power for the city of Danville, some 70 miles distant. The drive along the river toward the dam is truly one of the most picturesque locations I've ever encountered in the southeast United States. After weeks of torrential rains in the area — which had washed out a section of US 58, the main highway through the area — the river was running high and fast, but the winding gravel road out to the dam was passable and in fair condition. There are numerous dwellings along the route — everything from sprawling farmhouses to tiny, rustic cabins — many on the far side of the river and accessible only by narrow, rickety bridges, few of which appear all that sound. One geocacher who hails from Vermont described the location as virtually identical to the Green Mountains in that state, and it does, in fact, so resemble the Vermont countryside described in H. P. Lovecraft's classic horror tale, "The Whisperer in Darkness," that I could have been fooled into thinking I was on my way to the Akeley farmhouse featured in that story. We encountered precious few other human beings out there — nor any of them there "outer ones," probably to our good fortune — and at the parking location near the cache, the river ran through prodigious rock-strewn cliffs that rose so high and steep they appeared poised to collapse on our heads. Unfortunately, the above photo does not begin to convey the almost dizzying scale of the steep mountainside above the river. Happily, the geocache itself wasn't far up the hillside on the near side of the river, and I managed to locate it quickly. "Trout Slayer" was hidden in 2006, and it was good to find the container and contents in almost pristine condition. 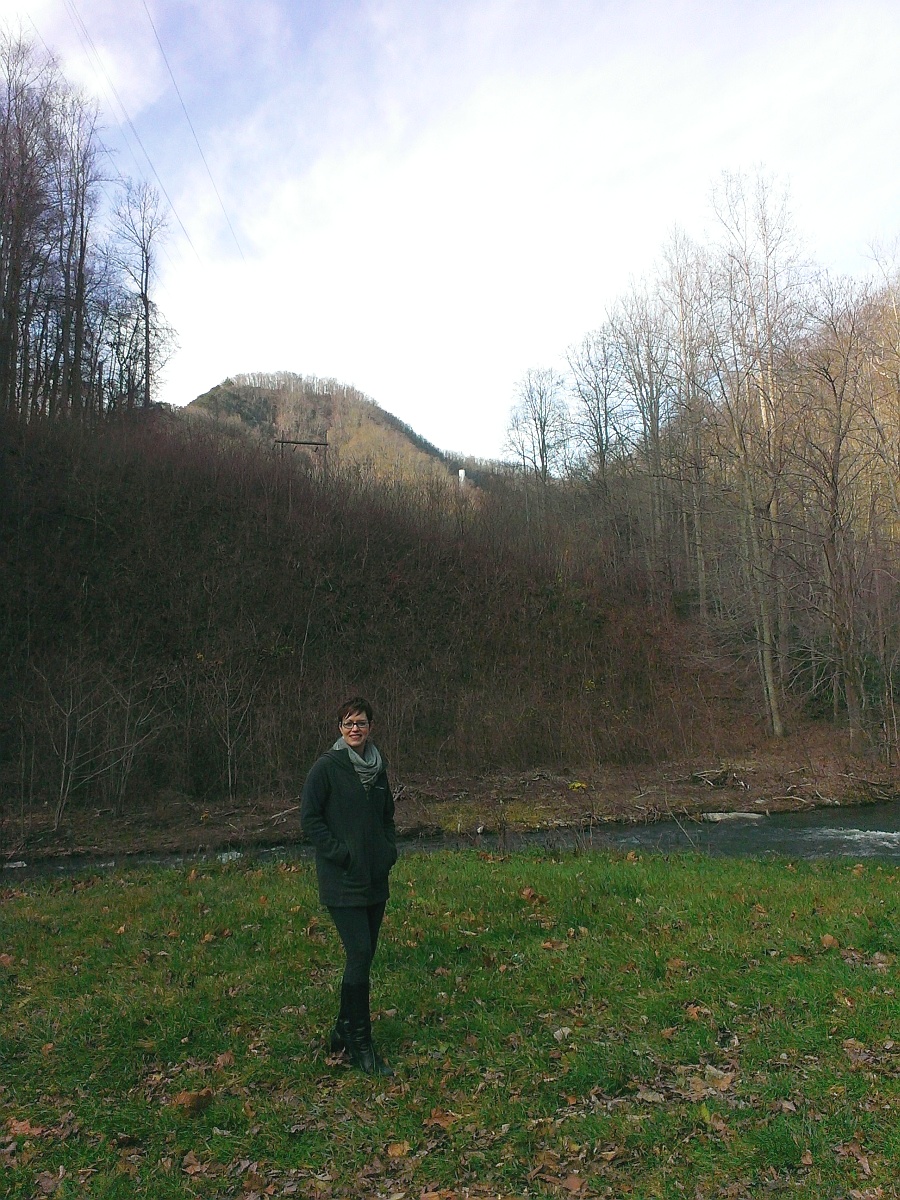 After making the find, we drove back out of Kibler Valley, up the Parkway, and to Villa Appalaccia, which we'd had the pleasure of visiting just a few weeks ago, on Halloween (see "Stonewalling for Halloween," November 2, 2015). The wine here can scarcely be beat, and the weather was more than conducive for sitting out in the remote terrace area, which Ms. B. and I have traditionally had all to ourselves — as we did yesterday. After a delicious glass of wine each, we then made our way over to Chateau Morrisette, just a mile or so down the road. Actually, our reason for return to the area so soon after our recent visit was due to a nice incentive Chateau Morrisette provided us. As I mentioned in my blog at the time, our previous experience there was a bit underwhelming. I had also mentioned this in a review of the restaurant for OpenTable, through which we had made our reservation. For our dissatisfaction, the folks at Chateau Morrisette very kindly offered us a free bottle of wine on our next visit, and since we had the opportunity, we decided to take them up on the offer right away. This time, we could hardly have had a more enjoyable experience, both at the winery and at the restaurant. For them, it was an excellent investment; for offering us a bottle of wine, in return, we purchased several bottles at the winery (Ms. B. and I both have had a disconcerting number of empty slots in our respective wine racks) and had a near-perfect dinner, none of which would have happened had they not gone the extra mile for us. It's simply good business when the folks running an establishment understand they could have done better and then take the steps necessary to make things right. You can bet Ms. B. and I will be returning to Chateau Morrisette at the first available opportunity, and rather than a negative review at various online sites, they have a glowing one. In this day of the amazing power of the interwebz, I think that actually means something.

And then we returned to Mum's, visited a bit, and availed ourselves to a bit of The Walking Dead. It was kind of like watching Black Friday from a comfortable distance. Nice, it was.

I trust your day was as awesome or better.