A Random Tale of Electrifying Terror 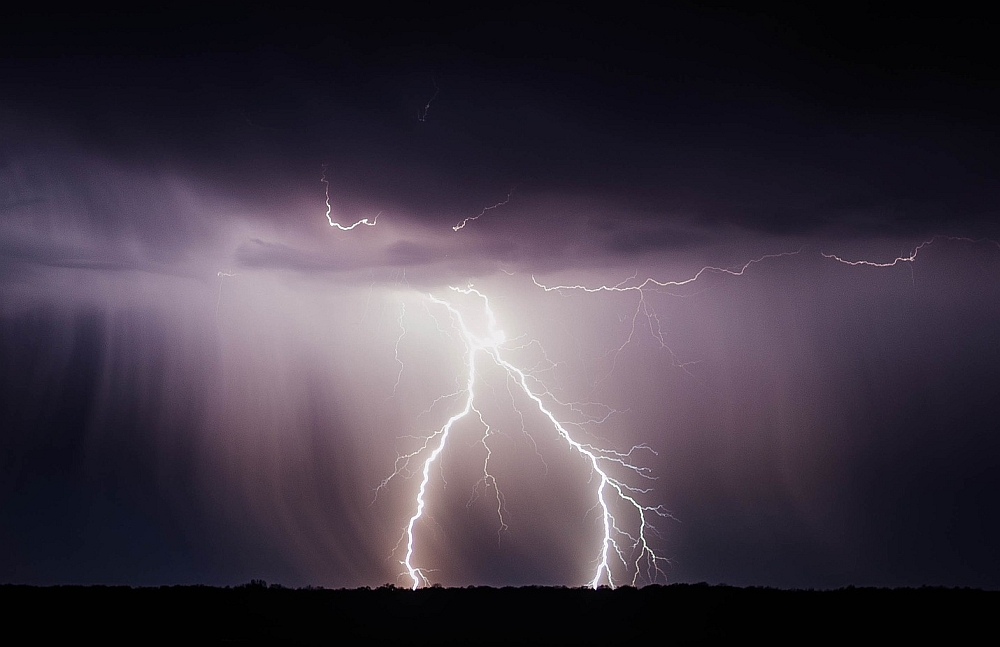 The two most terrifying experiences of my life both occurred in Myrtle Beach, SC, a couple of years apart. The first was when I got eaten by a shark (A Random Tale, Sept. 20, 2011). The second was when I got blowed up real good by lightning. You'd think I might have an aversion to Myrtle Beach, but really, these things only make the place somewhat more endearing.

I'm pretty sure it was the summer of 1977, and my parents, my brother, and I were on our annual pilgrimage to the beach, where we owned a time-share unit for a week in June. In those days, my dad and I were both avid golfers, and playing golf at the beach was a rare treat. I think we played at a different course each day of the week we were there. On our final outing for the week, as was customary, Dad and I teamed up with another twosome we met at the course to make a regulation foursome. We headed out under clear skies, with no indication that rain might interfere with our game.

We were about as far out on the course as one can get when we saw the first clouds. We had just been laughing about some fellow who was apparently having a bad day of it: he had hurled one of his golf clubs up in a tree and it had gotten stuck in the limbs. He was trying to knock it out of the tree by throwing more clubs at it. By the time we had finished putting on the nearby green and started out for the next tee, he had three more clubs stuck up there. That was when we noticed the sky had turned almost as black as night. At the beach, fierce squalls can often blow in without warning, and when that lightning starts popping, you really don't want to be out in it. Well, we saw that lightning — disconcertingly close — and then discovered, to our good fortune, there was a shelter not very far away. Dad drove our cart at express speed to the shelter, with our partners and several other golfers close behind. Once underneath the roof, the cart drivers all maneuvered so the rubber tires of each cart were touching the tires of another. There was a restroom in the shelter, and I needed to pee, so I stepped out of the cart and began making my way toward the restroom door.

My God, I'd never heard anything like it. A brilliant light flashed in the corner of my eye, and when I looked around, a blue-white ribbon of electricity was corkscrewing around the trunk of a large tree about thirty feet from the shelter. With a sound like a 1,000-pound bomb going off, bark exploded in long, snakelike ribbons in all directions, some clattering down on the roof of the shelter.

Till that hole, which was probably 13 or 14 out of 18, I was playing some pretty respectable golf — a couple of strokes under par. At the end of the round, I came in something like ten over par. I'll blame the fact that the golf course was waterlogged after the storm; it had nothing to do with the fact that not all of the wetness on me was necessarily rainwater.

That was the day I got blowed up by lightning.
Posted by Stephen Mark Rainey at 11:23 PM

Always a golfer's worst nightmare, a sudden storm while at the farthest point from the clubhouse. And what is normally the cover of choice, or necessity? A tree. Does one take the chance of being struck by lightening while under the tree or the insurance of getting soaking wet while staying out in the open? Usually the former is the result of the golfer's contemplation.

Everyone seems to have lightning/golf stories. Even those of us who haven't golfed in decades. Did I ever tell you the story of the guy's poodle getting eaten by an alligator just after a cloudburst at one of the golf courses on Jekyll Island? True story.