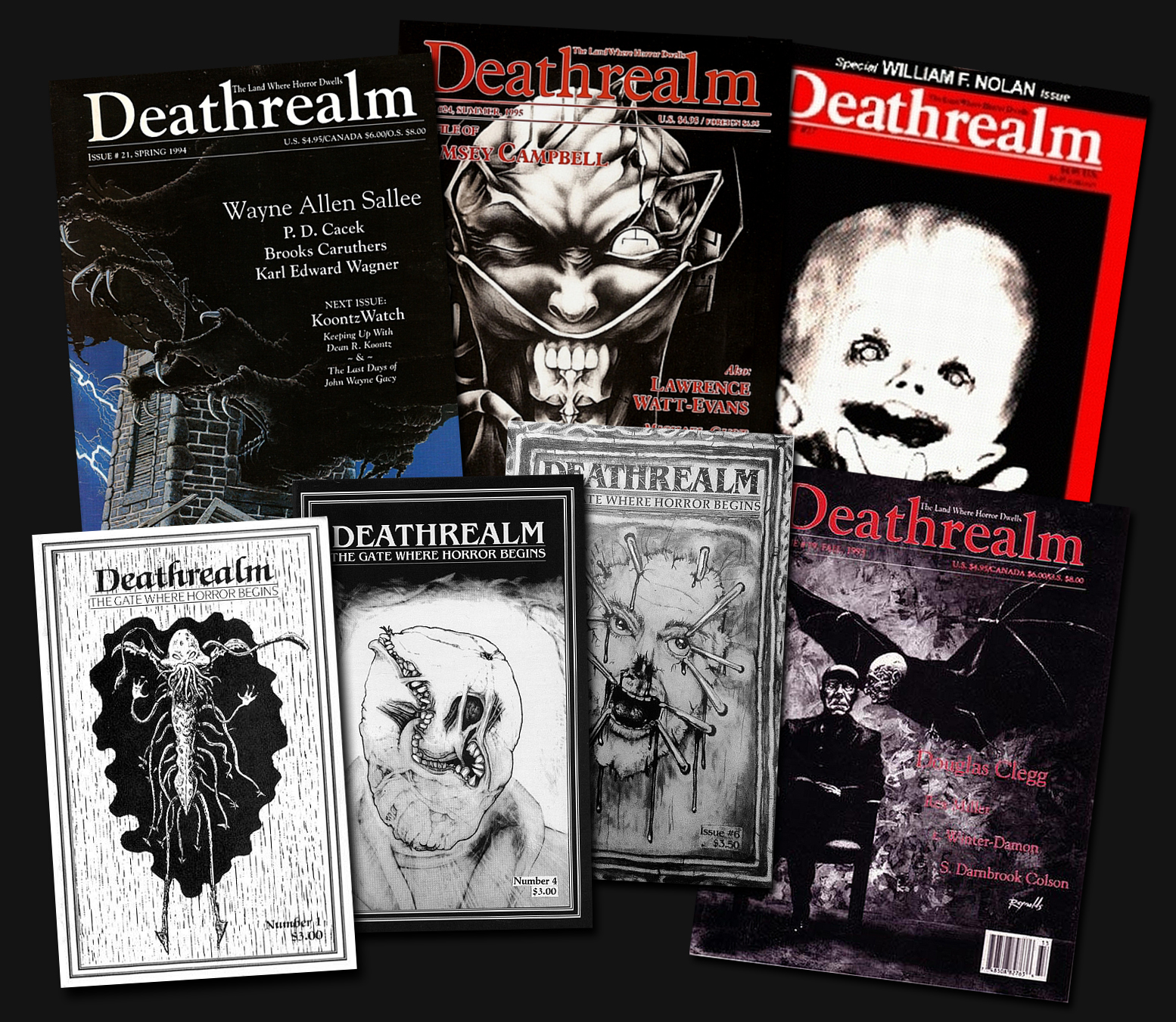 So. Do you remember Deathrealm?

For the past couple of decades, it's been rare for my thoughts to wander back to the days of that little horror magazine I managed for a ten-year spell... back when I had a bit more hair topside. Now and again, though, reminders of Deathrealm's existence hit me with varying degrees of intensity, and over the past year or so, for whatever reason, those reminders have come around with more than customary frequency, ranging from some writer or artist's random reminiscence on Facebook or elsewhere to the inevitable pointed questions about whether I'd consider reviving the property in some form or another. Since the magazine's retirement in 1997, I've solemnly sworn I'd not do any such thing, at least not as a quarterly publication (the horror stories behind the scenes often put to shame those between the covers). However, this year being Deathrealm's 30th anniversary, a few months back, I actually went so far as to propose releasing the title as an anthology, or series of anthologies, and for a time, the idea actually gained some traction with a noteworthy publisher. Either sadly or not, things didn't come together, but lately I have found the idea of reviving Deathrealm as an anthology series at least reasonably appealing.

From the late 1980s through the 1990s, Deathrealm, along with Cemetery Dance and several other publications specializing in dark literature, had a sizable following, regularly won awards, and helped propel any number of authors to the next level of success in the business. In its day, Deathrealm achieved a level of credibility that surprised even its harried, sometimes bumbling editor. The question I keep coming back to now is whether this time might be right for a Deathrealm resurgence. In the intervening years, my life has changed in uncountable ways; my interests have evolved; priorities have changed; and the publishing business has mutated into a whole different beast—not necessarily better or worse, just different. A Deathrealm that might come out in the next few months or years would not—could not—be the Deathrealm of old. And it shouldn't be.

These are questions that the bumbling old editor will continue to wrestle with. In the meantime, particularly for those to whom Deathrealm might have been a stranger, here is a history lesson. I'll spread it out over more than one blog entry, as anyone glimpsing too much of it at once might suffer horrible consequences.

Deathrealm's roots hearken back to my first publishing venture—Japanese Giants, a fanzine about Godzilla and kindred kaiju, which I started in my junior high school years, circa 1974. After producing a single issue, having learned an important lesson about economics, I passed the torch to a couple of other editor/publishers, while still remaining involved in the magazine's production. In the late 1970s, Ed "The Great Entrepreneur" Godziszewski of Chicago, took the helm, and eventually, in the early 1980s, I ended up moving to Chicago, specifically to take my rightful place as one of the official Japanese Giants guys. It was during this time that Ed, co-editor Bill "Wilted Greens" Gudmundson, and I began to expand the magazine's circulation via higher production values and newsstand distribution, and the contacts I made during this period eventually helped make Deathrealm—still years away at this point—a reality.

1986:
In Chicago, had I met Mike Stein of Filmfax magazine, and the late Bob Weinberg—author, publisher, and book dealer/collector—both of whom proved to be goldmines of information about the publishing business. Bob Weinberg's shop carried Robert M. Price's long-lived Crypt of Cthulhu, and having discovered the joys of H. P. Lovecraft some years earlier, I fell in love with the publication. It was Crypt, in fact, that put the bug in my head to start up a fiction magazine. At the time, I worked for a company that manufactured high-end typesetting systems, and one of my jobs was to troubleshoot the machines by typesetting and printing out endless numbers of pages—which meant I had easy access to professional typesetting systems that virtually no other small publisher had. Through Japanese Giants, I had acquired a network of distribution contacts. So, in early 1987, I decided to make the leap and put together a digest-sized publication of original horror fiction. I was already acquainted with Wilum H. Pugmire, a regular Crypt of Cthulhu contributor, via the aforementioned daikaiju circles, so I approached him, and a few other writers I had discovered in Crypt of Cthulhu, to see if they might be interested in contributing to a new horror digest. They were interested. And fellow Japanese Giants guy Bill Gudmundson knew a gentleman named Jeffrey Osier, who had written a horror story called "The Encyclopedia for Boys." I read the story, loved it, and dearly wanted to publish it.

This new digest needed a title. I was a fan of the SF anime series Space Cruiser Yamato, and one of the Yamato movies featured an alien space station whose name, in Japanese phonetic characters, came out as Dezarium. To me, the name sounded like "Deathrealm," and to this day I have no idea whether the name was actually meant to be translated as "Deathrealm," but that, I decided, would be the title of this new little horror digest. Done, done, and done.

With Japanese Giants, primarily a non-fiction magazine, the editorial "staff" had provided virtually all the writing and artwork, and I knew little about accepted etiquette for fiction publications. My idea was that Deathrealm would be something of a glorified chapbook, featuring some of my own horror tales as well as the work of other writers I specifically solicited. For the first issue, I decided I would include one of my stories called "The Arms of Doom," Jeff Osier's "Encyclopedia for Boys," something by Wilum Pugmire, and a poem (about Wilum) by Jessica Amanda Salmonson. I got a good quote for printing, put out advance notice to the distributors I knew—which netted a good many orders—and set about the production work, which in those days involved endless galley sheets, stat camera images, X-acto knives, rubber cement, and considerable manual labor.

In the 1980s, I was pretty prolific not just with my writing, but with artwork, as I had a Bachelor of Fine Art degree from the University of Georgia. I created the magazine cover, did an interior illustration or two, and solicited some artwork from a few other artists who were established in the then-thriving small press horror market. Things were definitely coming together.

And at last, in spring 1987, Deathrealm #1 hit the street. It had some honest-to-god comic shop distribution, attracted a sizable subscriber list, and found favor among reviewers. With things taking off on such an encouraging note, it looked like Deathrealm might end up being more than a one-shot deal, so I immediately began making plans for issue #2. I knew I couldn't manage a monthly schedule, but quarterly seemed reasonable. I approached many of the same individuals who had helped put Deathrealm on the map, including Mr. Osier, Mr. Pugmire, Ms. Salmonson, as well as several other folks who had shown serious interest in being published. I again provided the cover art and included my story, "Threnody." I had little trouble filling the contents page this time around, but I began to wonder about how I might fare with upcoming issues.

In those days, there was a wonderful monthly market guide, called Scavenger's Newsletter, published by the late Janet Fox, and its subscriber list included a lot of authors whose names I had become familiar with through various horror publications.

Following the release of issue #2, I made the fateful decision to open Deathrealm to submissions from the world at large. And for the next few years, my life would never be the same.

Deathrealm was a great magazine. It was sad to see it go. It was part of that last explosion of authors and a few publishers refusing to die with the rest of the pulps.

Sadly, it was the final bright flash in a losing battle. Literature seems dead, these days. I don't read that electronic shit and never will.