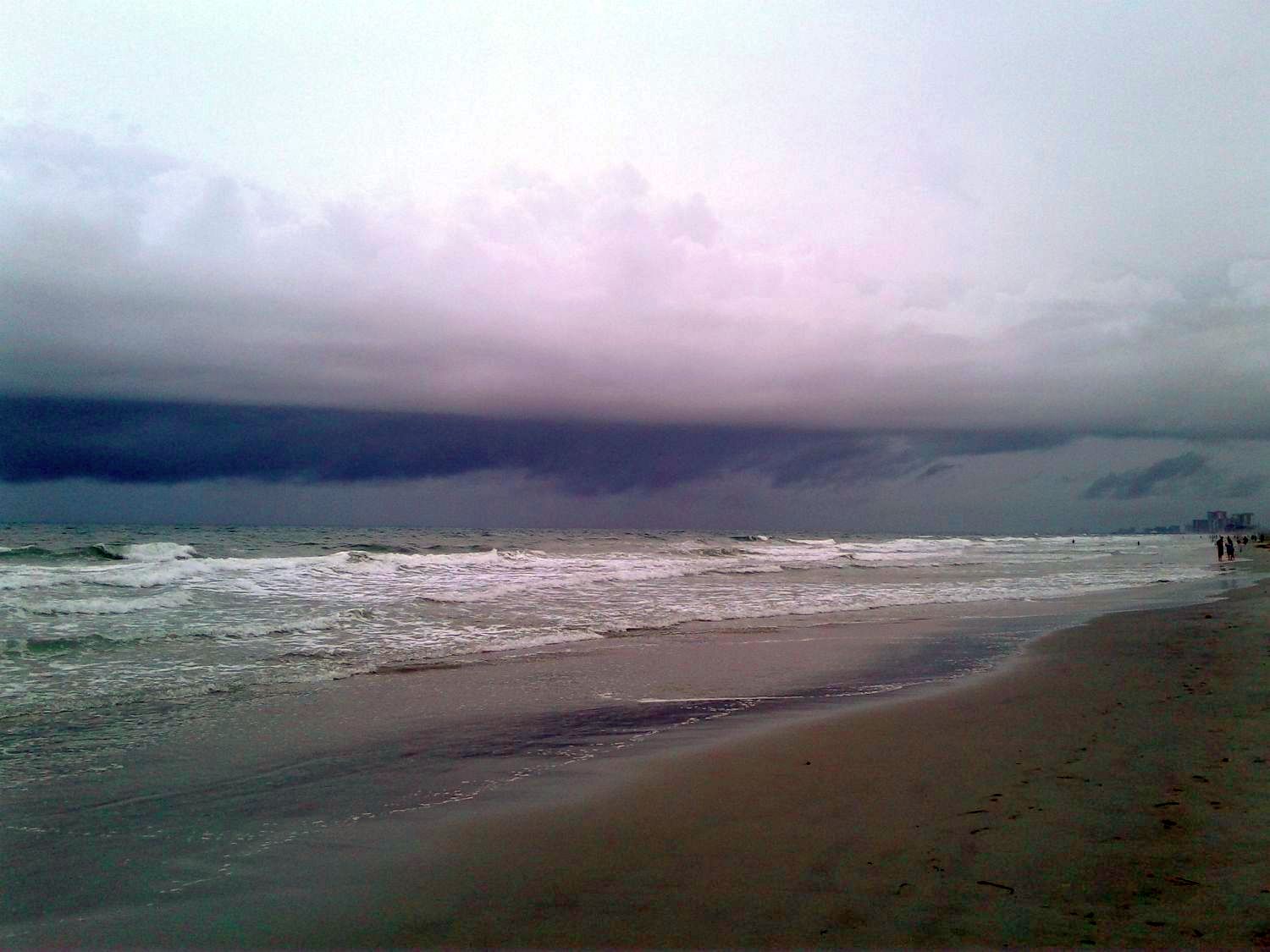 I grew up going to Myrtle Beach, SC, in the summertime, and I count many of those trips among the highlights of my youth. For the most part, I still enjoy getting down there when the opportunity presents itself, although several times in recent years, the increasingly massive influx of humanity into that particular geographic space has been so freaking overwhelming that it's sucked the joy right out of any number of potentially good times. When our friends Gerry (a.k.a. BigG7777) and Bridget (a.k.a. Suntigres) invited Kimberly and me to join them on a Myrtle Beach trip over Memorial Day weekend, the opportunity to go sounded thrilling, but I found myself apprehensive about facing the inevitable holiday crowd—especially since it was also time for "Black Bike Week," when several thousand bikers descend on the Grand Strand. I have no problem with bikers per se, but that additional number of human bodies seemed bound to push the beach's temporary population into my personal red zone.

The trip down on Friday afternoon was certainly pleasing for the Geocachers in the vehicle (that's three out of four, ladies and gentlemen). Along the way, we stopped for several fun hides, discovered an incredible BBQ restaurant in a little town called Chadbourn, and had an all-around fun time swapping Geocaching stories (well, three out of the four of us did). As we approached the SC state line that evening, all of us expected to encounter significant traffic, even on the back roads which our host Gerry knew from his frequenting the area. But there was almost none. And for those of us who have experienced massive traffic backups getting to the beach, this felt like a godsend.

It only got better.

Gerry's place is in North Myrtle Beach, in a somewhat tucked-away resort area, so while it wasn't directly on the beach, it offered just about every amenity we could desire and proved perfect for our slightly more introverted crowd. Still, we opted to take a late-evening jaunt into the town proper, and here we did discover plenty of bike parades, rowdy revelers, and wall-to-wall human party favors, but it all proved enjoyable, especially a little foray into the more mellow Fat Harold's Beach Club, where we got to watch people who know how to shag shagging the night away.

Saturday, the lot of us started out relatively early, and the three Geocachers in the crowd made a most invigorating morning out of hunting caches—all without sending Kimberly into a murderous rage, and I know this because she did not murder any of us (she actually seemed to be enjoying herself, although I doubt she would admit any such thing). For lunch, we found surprisingly good food and drink at Margaritaville at Broadway at the Beach, with expensive but delicious margaritas all around and a bison burger that almost rivaled the fare at Ted's Montana Grill, which has historically served the best bison I've found. After that, we sampled (and purchased) some decent jerky at The Beef Jerky Outlet, sampled hot sauce at The Pepper Palace (which offered some good stuff, though it hardly singed my palate), and sampled wine (some quite excellent) at The Coastal Wine Boutique, close to Gerry's place.
To top off our outing, we took helicopter rides. Gerry and Bridget went up in one, while Ms. B. and I went up in another (no, I didn't actually drive it). I had never flown in a helicopter before, so it was an all-new experience, a 20-minute excursion a thousand feet above the Grand Strand. It made me exceedingly happy to fly past Regency Towers in south Myrtle, where my dad owned a time share condo, which our family used from 1977 to 2000, during which time I don't think I missed a single summer visiting. The experience was a bit more edgy than the usual jetliner flight, especially the dives and banks, which at one point elicited from Ms. B. a rather cute scream (it really was). A treat indeed, one I should not mind experiencing again one day. The flight, I mean, not necessarily the scream.

For dinner, we sought out and found Brother Shucker's Fish House—some delicious fried grouper bites and oysters on the half shell for the old dude—and then we returned to our hosts' place for an evening of enjoyable banter and frolicking.
Early on Sunday, which was Gerry's birthday, the three Geocachers in our party went out Geocaching before Ms. B. even saw the light of day, though she did rise shortly after we left and spent a happy morning working on some pen and ink art—one of her favorite activities—which turned out quite beautiful. Once back at the resort, we went out to the pool to get in some swimming and bathing (and in Ms. B.'s case, some serious sunburning), then returned to the condo to share in some celebratory wine and song. And oh... was there ever wine and song. Enough song, at least, to clear the pool area of non-birthday-celebrating guests. This is as it should be.

After this, we piled into one of Gerry's golf carts and hauled ourselves down to Empire Fire Mongolian Grill for a fiery imperial Mongolian dinner, and then down to the beach, just before a significant squall came around. We managed to get back to the condo without getting totally soaked, and there we treated ourselves to Deadpool and Strange Magic, the first being an adult-oriented, occasionally raunchy superhero movie, the latter being a cute kid's musical. Both entertained us immensely, why, yes they did.
This morning, we had to pack ourselves up to leave—in a driving rain at that—but before hitting the road, we hunted down and killed a monster lunch at House of Blues, which proved a fine send-off. Good beef brisket, nice atmosphere, and excellent service, I've gotta say. Despite the water, we did claim another handful of caches, and arrived safely back home this evening.

A whole long weekend with minimal crowds, decent weather (at least until today), and company that can't be beat. Perfect hosts, this Mr. Birthday and Ms. Suntigres, and I hope we have another chance to share a trip together. I can at least guarantee that we'll be sharing another Geocaching outing in the nearest of futures.