Zooming in the New Year 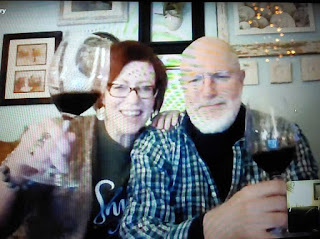 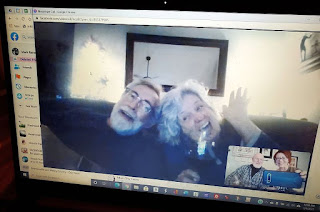 It wasn’t quite the way Brugger and I have typically ushered in a new year — or hoped to usher in this one — but one could hardly characterize 2020 as in any respect “typical.” For some time, we had dared hope the pandemic might have abated sufficiently to hang out with friends for New Year’s; mais alas, it most assuredly has not. So, in our typical undaunted fashion, Ms. B. and I made our own little New Year’s celebration, as we have a few times in the past, and actually had a damn fine time of it. I was pleased beyond pleased that a new geocache had published early in the day, over in Glen Raven, near Burlington. I went after it just before darkness fell and, as I was leaving, ran into friend Night-Hawk (a.k.a. Tom). Thus I got to wish one of my favorite fellow geocachers a miserable, socially distant new year. I’m sure he will take it to heart.
Not unlike our private little Christmas holiday, our New Year’s Eve proved intimate and mellow. Brugger had selected a couple of mighty fine wines for the evening, and I made Chicken Vindaloo for dinner, which turned out respectable. We watched Logan’s Run, which I hadn’t seen in many years and which she had never seen, and Liar, Liar, which she wanted to watch again after quite a few years. At midnight, friends Terry and Beth appeared on our computer screen for an impromptu bit of long-distance whooping and hollering via Zoom. Unlike most years, fireworks (and gunfire) from around the neighborhood was sparse. 2020 may have taken the bang out of more than a few folks.
I can’t say 2020 didn’t bring some good things, such as the publication of my third Ameri-Scares novel — Ohio: Fear the Grassman! — and Borderlands 7, which includes my story, “Escalation”; having my work published in Borderlands has been among my primary literary aspirations for many years. Working at home has been a godsend. But in the grand scheme of things, 2020 was a miserable spell, most notably because I lost my mom to COVID-19 back in July. Pandemic aside, having to deal with estate affairs has dominated a massive portion of my life, and I will be so ready to move beyond it, hopefully later this year.
No, there won’t be any immediate, miraculous changes on the horizon, but I do hope, over the long haul, 2021 brings about some much-needed healing — physically, mentally, and emotionally — for so many in this nation. We cannot continue on our dark, gloomy, divided path without totally coming apart. Maybe sooner than later. I don’t think many of us want that.
Happy happy happy. K?
Posted by Stephen Mark Rainey at 1:49 PM