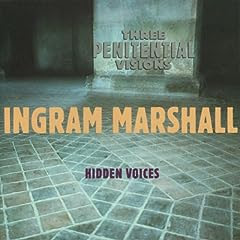 If you're hanging out in this neighborhood, it's a near-certainty that you're into creepiness. Because, yes, thanks for asking, I certainly am.

Many years ago, my good friend and fellow scrivener of scariness, William R. "Mr. Bill" Trotter, gave me a tape of some dark music he thought I might enjoy. Among the many excellent selections were Ingram Marshall's Hidden Voices, which may be the eeriest piece of music I've ever heard. Much like Ennio Morricone's Carpenter-esque soundtrack to The Thing, Hidden Voices, when played in an otherwise silent, dark room, is almost enough to make me turn on all the lights in the house and put on some lighthearted death metal.

It's a disconcerting, minimalist composition, featuring mostly human voices, distorted and warped, that conjure up a nightmarish yet strangely beautiful atmosphere. To my mind, it's the perfect soundtrack for Lovecraft's "Dreams in the Witch House." 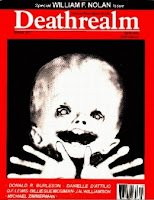 Back in the mid-90s, I played this piece for my at-the-time co-editor of Deathrealm, Dani d'Attilio—who was also a budding writer of no little talent. As a writing exercise, we both wrote stories based on the impressions that the music left us with. Her story was so different from mine that one would never guess the source of inspiration was the same for both; yet, an astute reader might be able to discern emotional peaks and valleys common to both, which corresponded to the musical flow. I liked her story, which she actually titled "Hidden Voices," well enough to run it in Deathrealm #27 (Spring 1996—the issue that was banned in Canada because of Ian McDowell's wonderful cover art). My tale was "Silhouette," which appeared in Cemetery Dance #24 (Summer 1996), and was subsequently reprinted in The Best of Cemetery Dance. (It will also be appearing in my upcoming collection, Other Gods, from Dark Regions Press, this spring.) To this day, I think "Silhouette" may be the creepiest story I've ever written, due entirely to the powerful inspiration of Marshall's music.

Hidden Voices is difficult to find on CD anymore; it's on an album titled Three Penitential Visions/Hidden Voices, which includes three other tracks. For Christmas, I received a nice iTunes gift certificate, and I was thrilled to find that the entire album is available on iTunes for $9.99 (in fact, you have to purchase the entire thing; you can't get just the individual tracks). It's well worth it; Hidden Voices is by far the strongest and most distinctive composition on the album, but the others are none too shabby. If you've got a hankering to listen to something that will likely raise the hairs on the back of your neck, Hidden Voices is the ticket.
Posted by Stephen Mark Rainey at 10:40 PM

I'm going to have to give it a try. I usually listen to PANDORA - they let you create a "station" by inputting songs and artists you like, then weeding out from the "similar" sounds until you have what you are after (more or less) and you can usually buy and download the music with a click or two if the fancy strikes. I'm going to try adding your artist to my Pandora station and see what I get.

I listen to Pandora quite a lot. I think I've already entered Ingram Marshall into it, and they didn't have anything. The stations I've created are quite cool, although there's a lot of repetition. At least you can skip or eliminate titles you don't want to hear.

I also like that if you open the menu on a song, it tells you WHY (from your earlier choices) they chose it. As long as you seed it regularly with new stuff, it doesn't repeat too much...you are right about Ingram Marshall, though...nada.

Thanks for this tip. I love offbeat music. The Hillside Thickets and their tributes to Lovecraft. Who can forget that lovely musical: "Shoggoth on the Roof." And then there's always Alice Cooper for dark tongue-in-cheek.

However, when it comes to listening to pure atmosphere, nothing beats Bernard Herrmann for me.

I'm particularly fond of Herrmann's score to THE DAY THE EARTH STOOD STILL.

Ever listened to the Herrmann orchestration of Holst's THE PLANETS? Best I've ever heard. I haven't checked it out in many years, but I used to have an LP of it on the Phase IV label, I believe it was.