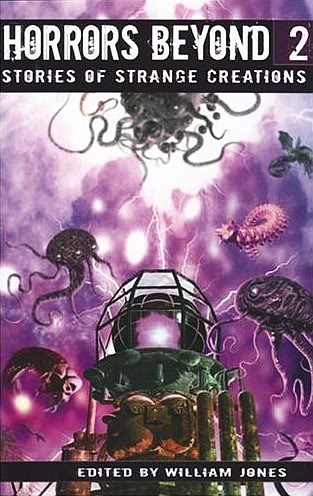 My contributor copies of Elder Signs Press's Horrors Beyond 2 anthology arrived today; another fabulous job by William Jones and ESP. Very attractive hardcover and trade paperback. "Stories of Strange Creations," the book is subtitled. The stories are about unusual devices, and one can be pretty well certain that they're mostly unpleasant. The devices, I mean.

Writer, Sinister Minister, and horrific host Maurice Broaddus has officially announced Mo*Con III, which I will be attending as a guest this summer. Other guests of honor include Nick Mamatas, Matt Cardin, Lucy Snyder, Tina Jens, Chesya Burke, Kim Paffenroth, and Bob Freeman.

Late addendum: My contributor copies of Doorways magazine #4, which features my story "A Tale of the Terrible Dead," arrived today as well. Looks like a good time to turn out all the lights and read some ramblings by the Rainey.

Well...leave at least one reading lamp on, anyway.

Sure enough - got home and there was a box of contributor's copies for me as well. I love that cover art! Will be reading this as soon as I get through Tom Pic's Fever Kill...

I've got a pile of stuff to read, but I may bring this one up to the front of the line, just 'cause it looks so nice.

Apparently this one will be on the preliminary Stoker ballot as well...

I've already purchased my copy and look forward to hunkering down and reading it soon. I have also been sending in praises through the HWA for your contribution to High Seas Cthulhu.

Thanky, sir. I'm looking forward to reading yours in FRONTIER CTHULHU. Your HIGH SEAS story was easily one of the best in the book.