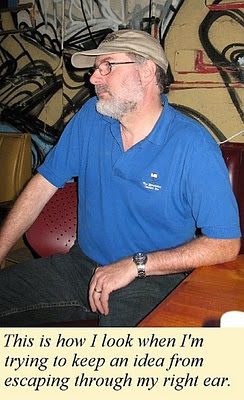 It's easier for me to write a 10,000-word story or script than to summarize the idea in 500 words or less—and still convey a sense of character, narrative voice, setting, and flow of the plot. Which is exactly what I regularly need to do for various projects. Just finished up such a proposal for a new script and sent it off to the producer; whether it was successful or not, we will have to see, but for such a short little fellow, it sure seems to be a great weight off my shoulders. The nice thing about this one is that if it doesn't work for the specific project in hand, with some tweaking it can be reborn as another animal altogether. Well, hopefully, anyhow.

Now I've must practice some guitar work, as there's a fair chance I may be doing another open-mic performance this Wednesday at the Garage in Winston-Salem. If so, I'll post a note here and elsewhere, in case you're dying to come round and heave fluid-filled objects at my head.

Take a load off, Fanny.
Posted by Stephen Mark Rainey at 4:16 PM