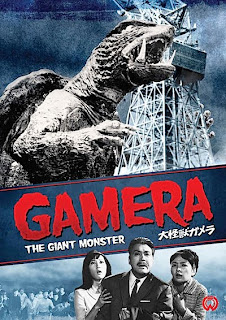 Well, I reckon it's time to take on Gamera, Japan's most famous flame-spewing flying giant turtle. Till now, the original Japanese version has never been available domestically on DVD (though in 2001 Neptune Media released superb editions of both the original Japanese and U.S. versions on VHS; the U.S. version has had a few substandard DVD releases and is currently available at Hulu.com).

The Showa Gamera series has its charms, especially the first three entries (Giant Monster Gamera, Gamera vs. Baragon [War of the Monsters], and Gamera vs. Gaos [Return of the Giant Monsters]), but I just can't say I've ever been much enamored of the big turtle—at least until the Heisei Gamera series, which put a whole new spin on the critter. The original series' overt aim at young audiences put me off even as a very young member of said audience, and only as an adult delinquent have I managed to derive much enjoyment from the antics of the inkorrigible kame.

Gamera: The Giant Monster plays things considerably straighter than most of its successors, but there's no getting past the little kid, Toshio (Yoshiro Uchida), who just looooves turtles, continually popping up just when you think the filmmakers have come to their senses and forgotten about him. The story goes like this: A flight of Soviet jets on maneuvers over the Arctic Circle trespasses into U.S. airspace, and American fighters shoot down one of the bombers, resulting in a nuclear explosion, which frees Gamera from its eons-old icy prison. After sinking a ship and whooping up on the survivors, the beastie hurtles its way to Japan, where it attacks nuclear power plants to consume the energy they produce. Assaults with conventional weaponry have the usual effect on the kaiju—nada—so the brain trust devises a last-ditch plan aptly named Plan Z: lure Gamera to Oshima Island, where the critter is contained inside a mammoth rocket and then launched into outer space, thus ridding the world of another city-trampling menace (at least until the next movie, Gamera vs. Barugon, in which the rocket crashes into a meteor, releasing Gamera to return to Earth and commence a whole new path of destruction—and fight another big, bad lizard to boot).

As I mentioned, in the overall, the original Gamera is actually enjoyable, with a significant amount of monster vs. miniature action and a marginally palatable storyline. Though obviously patterned after Godzilla, the movie serves up no serious subtexts; the whole nuclear element is just a device to rationalize the monster's appearance, and Gamera itself is played more as a novelty than any sort of metaphor, even a lightweight one. Its rampage through Tokyo is pretty spectacular for its day, and there's no denying Gamera is a meanie; the filmic carnage is a little more graphic than in most of the Godzilla movies—which, despite the fact the Gamera films are aimed at a younger audience, is true throughout the Showa series. The monster's ironic rescue of young Toshio (the kid falls from a toppling lighthouse, into Gamera's waiting claw; rather than eat him, Gamera gently lowers him to the ground) seems more a result of the monster's curiosity about little people than a display of authentic compassion.

The Shout! Factory edition features the original Japanese version with subtitles. While it's certainly superior to the 1966 American release (titled Gammera, the Invincible — don't forget the extra "m"!), the scenes added by World Entertainment Corp./Jack Harris Associates, which feature Albert Dekker, Brian Donlevy, Dick O'Neill, and Alan Oppenheimer, for the U.S. release are agreeably whimsical. The scenes they replace—a bunch of military and scientific posturing by some very poor western actors—in the original Japanese version are far less engaging.

Shout! Factory plans to release the rest of the Showa Gamera series in order, continuing with Gamera vs. Baragon in July 2010. I'm actually looking forward to these, since it's really high time that Gamera—or at least the celluloid on which it appears—was treated with a little more respect on this side of the water. 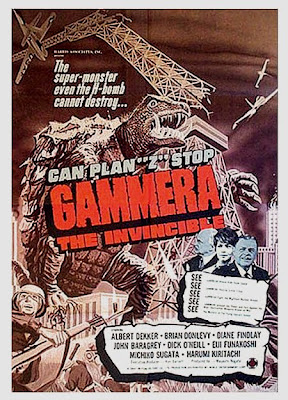 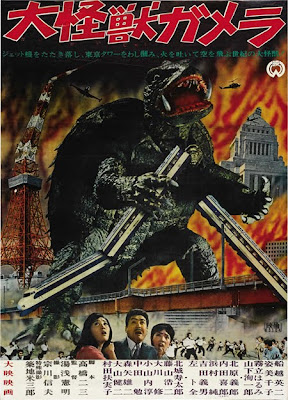