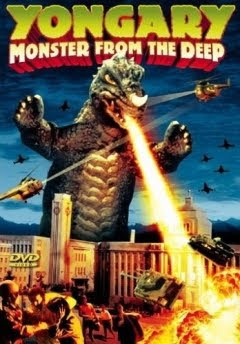 Unlike 1999's Yonggary (a.k.a. Reptilian), which was so awful as to be unwatchable, the original 1967 Yongary definitely falls into the so-awful-it's-fun category. It's a low-budget South Korean daikaiju film wannabe featuring a goofy dancing monster (whose open mouth frequently reveals a metal flame-shooting nozzle); cheap but occasionally compelling special effects; and several nondescript characters, most of whom are never named. The DVD cover shown here is of the inferior Alpha Video release, but I recommend the MGM DVD (double-billed with Konga), which offers a wide-screen, virtually flawless print of the film (though the sound is a bit tinny). The movie was released in the U.S. by A.I.P. Television—there was never a theatrical release—but apparently the original wide-screen presentation was preserved intact (reputedly, the original Korean negative was damaged so that it is no longer salvageable).

The film begins with the wedding of two of our occasionally seen but never-named characters, but the groom—an astronaut, and the only one who can "do it"—is called away to undertake a reconnaissance mission. He flies skyward to witness a nuclear bomb explode in the Middle East, which results in a "traveling" earthquake...which heads straight to Korea. Needless to say, the source of the quake is Mr. Yongary, who pops up near Seoul and begins tromping on the city, resulting in numerous shoe boxes, which are painted to look like bricks, falling on people's heads. Astronaut groom now goes off-screen for most of the rest of the movie, and a scientist named Ilu takes over, ably assisted by his nephew Icho, who is "oh, about eight years old." Ilu has invented a device that resembles a flashlight but whose beam makes people itch. No, I am not lying. As Yongary strolls about, smashing plenty of model buildings, Ilu runs to town "to help," though in what capacity we are never quite certain. Turns out, he's the one who ends up needing help because one of those falling, painted shoe boxes whacks him a good one. Meantime, as the monster trounces a chemical storage tank, Icho notices that the chemicals irritate the beast, causing it to dance—and prompting Icho to dance along with it. The chemicals knock Yongary senseless, but brilliant Icho steals Ilu's itchlight and shines it on the beast...who, quite riled, promptly gets up and tramples a bit more of downtown Seoul. After an aerial and missile assault that results in total failure, Ilu suggests hitting Yongary with a concentrated dose of chemicals, which finally brings the critter down once and for all. Our main characters laugh and clap, though Icho soberly reminds us that Yongary was actually a damn fine dancer and didn't really mean to hurt anyone.

While generally considered a Korean rip-off of Godzilla, Yongary actually follows more in the footsteps of Daiei's Gamera series. The parallels between Yongary and the original Giant Monster Gamera are many and unmistakable—from the nuclear blast that awakens it to its preference for ingesting flammable materials to its juvenile co-star who is menaced by the monster and yet still finds it all quite groovy. Probably coincidentally, Yongary's roar sounds a lot like Gyaos's, stepped down a couple of octaves.

While the people scenes are mostly tedious, the movie features more monster scenes than most of its Japanese counterparts, and though the miniatures are nothing to brag about—most are hollow and fall in on themselves without much effort on the monster's part—the atmospheric backdrops and variety of compositions make for an interesting visual fest. Yongary actually whomps on human folks from time to time, something that is rarely shown in Toho's daikaiju realm, though not that uncommon in the Gamera series.

Numerous scenes prove to be a screaming hoot, such as Yongary's nose beam (yes, I said nose beam) slicing a jeep in half, revealing a small supporting wheel under the front half, which couldn't be more obvious if there were cartoon arrow pointing to it. During the stampede of fleeing humans, most are carrying nonsensical items, the most notable being an empty picture frame and a large world globe. Funny the things that people are compelled to rescue from giant marauding monsters....

Yongary is absolutely silly enough to be a hootin' good time. I'm pleased to have such a good print on the MGM DVD, so I can give it a look about once every decade or so.