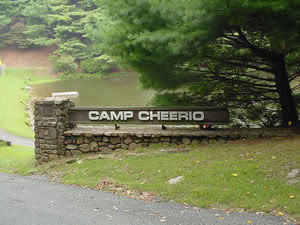 In the past, I've posted about a few of my experiences at Camp Cheerio (such as Wampus Cat), and after yesterday's experience with a shotgun-wielding dude, I figured it would be enjoyable to relate one of my most treasured memories from that picturesque and occasionally traumatic venue....

Today's pussyfoot parents would surely have a conniption, and there'd be lawsuits and media outcry and all that bullshit, but if that were the case back in the 60s, I'd have been robbed of an admittedly hellish but ingenious prank played on us kids by a bunch of camp counselors.

It started out on a nature hike, where one of the counselors (whose name I recall was Jeff something) was going to teach us how to build a campfire with a single match and only a bare minimum of flammable materials. Jeff was a little unstable, it seemed, for he had blazing black eyes, yelled a lot, and carried a pistol out on the trail with us. For me, that was a first, and I will admit I was a little scared. When he was instructing us how to gather materials for the fire, he was absolutely adamant that we find twigs of pine. "I want PINE!" he'd roar at us, and he had one poor little wretch in tears (not me—not yet). Eventually, we each had a fire going, and we thought that would please him. Nope; we hadn't thought ahead and gathered bigger wood to keep it going—PINE, of course—and this infuriated him enough to start popping shots off in the air. More tears, and this time, I think I might have leaked a few, since by now I was reasonably certain we were all going home dead.

Well, by the grace of God, we survived the nature hike and returned to the camp. Jeff went on his merry way, much to the relief of our little band of campers. That evening, right about sunset, the group from my cabin (the Navajo cabin, if I recall) went out to the lake for a picnic supper. We had just put our fire-building lessons to good use when, up on the ridge that overlooked the lake, silhouetted against the setting sun, we saw a figure holding what appeared to be a rifle. He yelled down at one of the counselors who was with us, accusing him of stealing his collection of handmade leather belts.

Yep. It was Jeff up there on the hill. "I could tell that guy was crazy," said one of the nearby kids, obviously about ready to wet his drawers. "Crazy!"

Our counselor, a red-headed chap named Mike, I think it was, hollered back that Jeff was mistaken. Nobody had stolen any of his belts; if Jeff had been robbed, he needed to take it up with Murphy Osborne, the camp director. This infuriated Jeff all the more, and he said that Mike had made his last smart remark. He raised his rifle...and BOOM. Damn thing sounded like a cannon going off. All us kids hit the deck. Mike hit the water, for he'd been standing on the dock.

Mike didn't come up, and a pool of red began spreading over the surface of the lake.

Yes, much screaming ensued, and next thing we knew, our other counselor was yelling for us to get in the van, GET IN THE VAN, and we did this with no little haste. He jumped behind the wheel and in seconds had us barreling back toward our cabin—but to get there, we had to pass the ridge from which Jeff had fired, and as we drove by, we saw that crazy mother in the distance aiming his rifle at us....

We were sure we were dead. But no shot came. Soon, we were back safely indoors, but we knew that if Jeff intended to come after us, he could be upon us in no time. Some of us wanted to head for the hills, but our remaining counselor said no, we needed to sit tight because even a crazy fucker like Jeff wouldn't come after us with lots of other people around. We fussed and fidgeted amongst ourselves for a seemingly interminable time. And then...the door burst open.

It was Jeff and Mike, arm in arm, hooting and hollering, embarrassingly pleased with themselves, obviously having set the whole thing up from the get-go, including Jeff's insane behavior on our nature hike.

Yeah, it was scary, and no doubt, that was one pair of twisted and somewhat sadistic rat bastards, but at eight years old, I'd never felt so alive or so close to death. To be sure, today, I'd never pull such a prank on a bunch of unsuspecting kids...well, probably not....but hey. In the end, it left me with a priceless memory from youth, and if nothing else, I learned early on just how I'd react in a traumatic situation.

I can say, with confidence...at least I didn't wet myself.
Posted by Stephen Mark Rainey at 5:37 PM