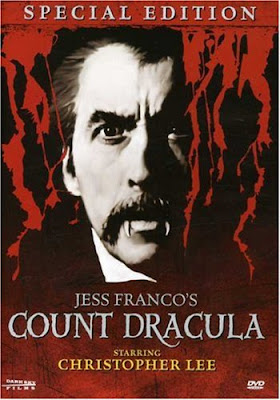 At some dimly remembered point in my past—probably the late 70s—I happened upon the 1970 Spanish-Italian production of Count Dracula, directed by Jess (Jesus) Franco and starring Christopher Lee, and since I seem to have gone on a vampire bender lately, the craving to give this film another look has been flung upon me. Fortunately, it's available from Netflix, and the Dark Sky DVD is currently in stock at Amazon.com. I sat down with a martini and the movie tonight, and I must say, while it's flawed in a bazillion ways, it's actually better than I remembered. As a reasonably faithful adaptation of Stoker's novel—and the vehicle for Christopher Lee's best performance as ye vampire—Count Dracula is a noteworthy horror flick.

The film begins as virtually all adaptations do, faithful or otherwise, with solicitor Jonathan Harker (Frederick Williams) traveling to Transylvania to deliver to Count Dracula the deed to a certain property in England (inexplicably, Carfax Abbey is not mentioned in this script), which the Count has purchased. Harker finds himself confined in an intensely creepy setting, with a grim, moody host, who is shown right from the get-go to cast no reflection in a mirror. Apparently, this is an insufficient red flag, as Harker continues to go about his business, but very soon, the infamous trio of female vampires introduce themselves to him, followed by the Count himself insisting upon a blood donation from Harker. This done, Dracula moves on to England, leaving a frail and somewhat deranged Harker to make his own way back westward. At this point in the novel, and in most adaptations, fiancée Mina Murray (Maria Rohm) pours out all kinds of misery, though in this version, not so much. It actually works to the film's benefit to spend minimal time on the characters' romance so that more of the film's running time can devote itself to some much-needed action. The usual shenanigans involving Lucy Westenra (Soledad Miranda) ensue—Dracula feasting on her before turning her into a vampire—and soon enough, Professor Van Helsing (Herbert Lom), Harker, Dr. Seward (Paul Muller), and Lucy's fiancé, Quincy Morris (Jack Taylor; there's no Arthur Holmwood in this version), are forced to drive a stake into poor Lucy's heart. The hunt for Dracula is on, culminating back at Castle Dracula, where ye vampire finally meets his demise...not by stake this time, but by flame.

Though Christopher Lee had already become well-known as Dracula, his interpretation in this film is quite different from his others, even in Horror of Dracula, which derived from the same source material. Unlike the hissing, leering, animalistic vampire of the Hammer films, Lee's Dracula here far more resembles Stoker's original, with much of the dialogue from the first half of the novel remaining intact. Most effective is Lee's makeup; just as in the novel, he originally appears as an aged, white-haired, mustachioed man, bereft of much energy. As he feeds on others, he gradually becomes more youthful, until, near the end of the film, his hair and mustache are black, and he gets about with considerably more vigor. During the scene in which he murders Lucy, his appearance—with bloody fangs and red-tinged eyes—is genuinely disturbing. I do find Lee's distinctive British accent almost disconcerting; one fully expects him to speak with a strong eastern European accent, a la Lugosi.

Herbert Lom makes for an adequate, if unremarkable, Professor Van Helsing. While Lom is a fine actor, he plays Van Helsing as needlessly enigmatic, frequently withholding information from his compadres, or speaking only in ominous riddles, until he is "certain" what he is dealing with, although he clearly understands Dracula's menace from the start. Before the climax, he suffers a cinematic stroke, which prevents him from taking part in the vampire hunt, in which he is a principle player in the novel. One would expect more from the renowned Van Helsing!

Soledad Miranda, as Lucy Westenra, is quite the 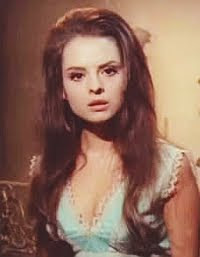 standout—to my mind, the most seductive Lucy in any Dracula adaptation. Her finest moment comes when, as a vampire, she lures a young girl to her; she then smiles and exposes her fangs. She appears beautiful and frightening. It may be the movie's most haunting moment. Klaus Kinski plays our Renfield, this time mute, which works to varying degrees. At one point, he appears to chomp on an actual fly; here, he puts on a very thoughtful expression, as if genuinely contemplating all there is to contemplate about devouring an insect. It's quite an effective scene. At other times, his expression is simply inscrutable, and when Mina visits him in the asylum, he attacks her, at Dracula's psychic command. At this point, one really wishes for the pathos of Tom Waits's Renfield in Coppola's version, or even Jack Shepherd's maniacal poetry from the 1978 BBC production starring Louis Jourdan.

Count Dracula showcases all the excesses of most western European horror films of the 60s and 70s: lurid cinematography, with lots of primary colors; camera shots that linger too long at the end of a scene; loud, overbearing music (courtesy of Nicolai Bruno, who frequently conducted the orchestras for various Ennio Morricone film scores). Deeply shadowed, very gothic sets seem to hide all kinds of menace even during the story's more innocuous moments, creating a grim and sometimes surreal atmosphere more characteristic of D'Argento or Fulci than Terrence Fisher—which helps put more distance between this film and Hammer's Dracula pics of the same era.

Unfortunately, Franco's budget exhausted itself before the film was finished, and in places, it shows—particularly during Dracula's death scene. It's a lackluster ending to an oftentimes impressive little piece of filmmaking. All in all...three out of five Damned Rodan's Dirty Hot Pepper Firetinis. I'd call that worth a look.
Posted by Stephen Mark Rainey at 8:07 PM