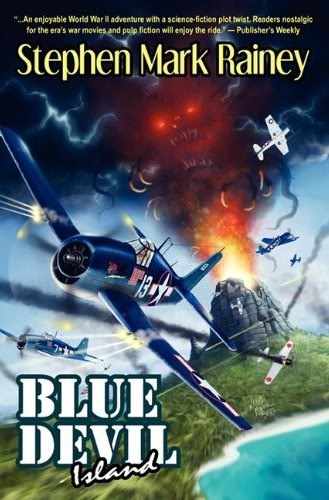 It really is high time I did this, so here it is: specially for Christmas 2011: Get an autographed copy of Blue Devil Island, by ye olde dude, at the special cut-rate price of $10.00 with free shipping. Yes. Ordinarily this book is $15.99, you pay postage, and I haven't devalued the copy with my signature. All that is remedied...for a limited time. Offer valid through the end of December or until the supply is exhausted. There are limited copies available, so it's first-come, first-served. This is a beautifully produced trade paperback from Marietta Books, with stunning cover art by M. Wayne Miller.

AUTUMN, 1943: The beginning of the American offensive against the Japanese in the South Pacific. Just west of the Solomon Islands lies a remote, desert island called Conquest, where the U.S. Navy stations a new fighting squadron, led by Lieutenant Commander Drew McLachlan, an ace pilot and veteran of the Battle of Coral Sea.

With his group of air warriors, who call themselves the Blue Devils, McLachlan soars into frequent combat with the Japanese, inflicting serious casualties upon the enemy. However, on the squadron's island home, signs appear that it may not be entirely alone, for in nearby volcanic caves, McLachlan finds evidence of habitation by unknown natives—natives that resemble no known living race, and that may yet exist in the mysterious subterranean catacombs. As the tension on the island mounts, McLachlan is forced to fight on two fronts: against their known enemy, the Japanese, and an unknown, predatory force that leaves mutilated victims as the only evidence of its presence.

As the Solomons campaign enters into its final skirmishes, the Japanese at last turn their attention to Conquest Island. In the final conflict, the Blue Devils find themselves the target of an overwhelming assault by the desperate Imperial Japanese forces—and McLachlan must face the reality that the key to his men’s survival lies deep in the dark and deadly caves of Conquest Island itself.

"I haven't had this much fun reading a book in a long time. I was right there on the edge of my chair during the flight missions, ducking and juking along with the pilots, and I was biting my nails as the more sinister elements of the island itself came into play. Adventure. Great humor. Undercurrents of unsettling suspense and wallops of terror. Blue Devil Island...had everything I wanted from it. And more."
—Scott Falkner, The Daily Cave Reviews...

To order and get more info about the book, visit Blue Devil Island Special Christmas Offer at The Realm of Stephen Mark Rainey.