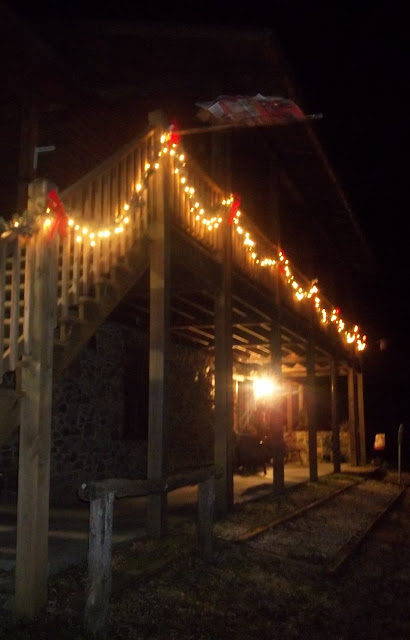 I've never been particularly fond of New Year's Day and its attendant traditions—as if January 1 is some magic milestone where the world changes, and you suddenly have the wherewithal you didn't have 24 hours earlier to fulfill your every dream. Far as I'm concerned, New Year's Day represents just another step along that ever-fun path to one's inevitable death. Still, I've never had reason not to celebrate when celebration is due, and this year...well, of course I did. Saturday afternoon, Ms. B. and I hauled ourselves and a couple of days' worth of provisions to the mountains of Virginia for a little sojourn at the Stonewall Bed & Breakfast, on the Blue Ridge Parkway near Floyd. Along the way, we stopped at Villa Appalaccia, a small but impressive winery that, to our happy surprise, we found open on New Year's Eve afternoon. Excellent, excellent wine, which, we learned, is made from grapes that are grown in slate earth, rather than the typical clay of the region. Apparently, it makes a significant difference, and I may have never enjoyed a wine more than their Sangiovese and Aglianico varieties.

The Stonewall has several guestrooms in the main house, but we opted to stay in the very rustic, very tiny View Cabin, located some distance away in the woods on the property. Spartan, to be sure; there's an outhouse for taking care of your personal needs—fortunately well-tended—and if you want to stay warm, you'd better fire up the old wood stove. The cabin is wired for electricity, at least, so you can plug in your electronic devices—though you won't pick up the inn's WiFi way out there. (Despite the distance from any population center, cell/3G/4G reception is quite good.) There's not room for much more than a bed, a chair, and a table, but we found it clean, stocked with wood and other necessities, and ultimately quite comfortable.

Once ensconced in our luxurious lodgings, we headed out to dinner at Chateau Morrisette restaurant and winery where Kimberly and I dined last New Year's Eve (and I found the inspiration for a new novella ["Adventures in the New Year"]). If anything, this year's fare at the restaurant was even better than last year's (filet mignon for the old man and peanut-crusted chicken breast for the young lady), and I was here introduced to an intriguing house "winetail" called the Bloody Indy—a concoction of their Independence white wine, tomato juice, and potent spices. A startlingly good drink, though more akin to a Red Eye (an old favorite of mine) than an actual Bloody Mary. This year, there were no uncomfortable after-dinner adventures, and we rather enjoyed our own little private welcoming of the New Year, sans Dick Clark or any other vestige of civilization's noise.

I might mention here that there have been some recent bear sightings on the property, so we were advised to make a lot of noise when coming and going on the path between the cabin and the inn, particularly at night. Thus, we took it upon ourselves, whenever we were out and about, to holler "Bear!" at strategic moments. I don't know that it frightened away (or attracted) any bears, but the squirrels sure looked at us funny. 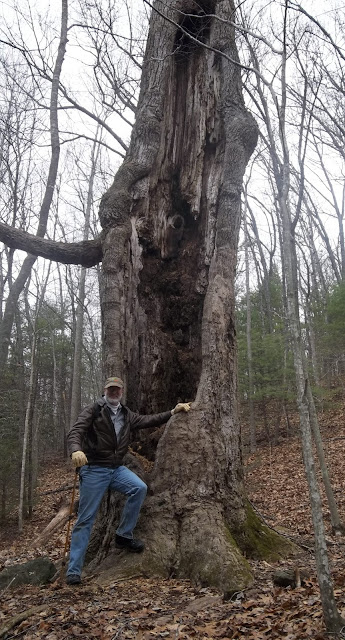 Breakfast at the Stonewall is something to behold. A massive spread of eggs, bacon, country ham, pancakes, french toast, biscuits, danish pastries, fresh fruit, juice, coffee, several varieties of tea...you name it. I find proprietor Scott Truslow's bacon to be the highlight of this feast. He has his own special method of preparing it, and it's worth raving about. A lot. So don't be surprised if every now and then on this blog or in person, I up and start singing about Stonewall's bacon. Fair warning.

Then, off to Rock Castle Gorge, not too far from the inn. There's a ten-mile loop trail through the gorge, and we did about five miles along the creek at the base, rather than tackling the sheer incline from Rocky Knob, up on top. A couple of caches were involved, of course. The highlight for me was coming upon an old, private farmhouse way back in the gorge, accessible only by the trail, which absolutely could have been the setting—transplanted from the mountains of Vermont to the mountains of Virginia—for H. P. Lovecraft's "The Whisperer in Darkness." The atmosphere here couldn't have been more suited to a Lovecraftian tale, and since Kimberly hasn't read the story itself, I gave it to her pretty near verbatim.

I do understand she slept less well last night than the previous night....

Last night, temperatures dipped well below freezing, but we built a great big campfire and roasted Nathan's hot dogs and marshmallows, accompanied by some of that fabulous Villa Appalaccia Sangiovese. The bitter wind drove us in before too late, though, so we settled into the cabin and watched Larry Blamire's The Lost Skeleton Returns Again on my laptop, which more than hit the spot for us. This morning, another fine breakfast, and the rather sad departure. A few caches along the way—including one at a beautiful little park in Danbury, NC, which involved an enjoyable vertical ascent to a scenic point overlooking the Dan River.

This evening, our friends, the Albaneses, invited us over for dinner and a movie—Case 39, starring Renee Zellweger (to whom Joe refers as "Sphincter Face," an epithet that I gotta tell you, however rude, resonates madly). A most entertaining horror flick, and this little gathering made for a pleasant welcome back to Greensboro.

I hope those of you who drop in here have a wonderful New Year, such as it is. And if you don't stop in here, well, just never you mind, since you're not seeing it anyway. 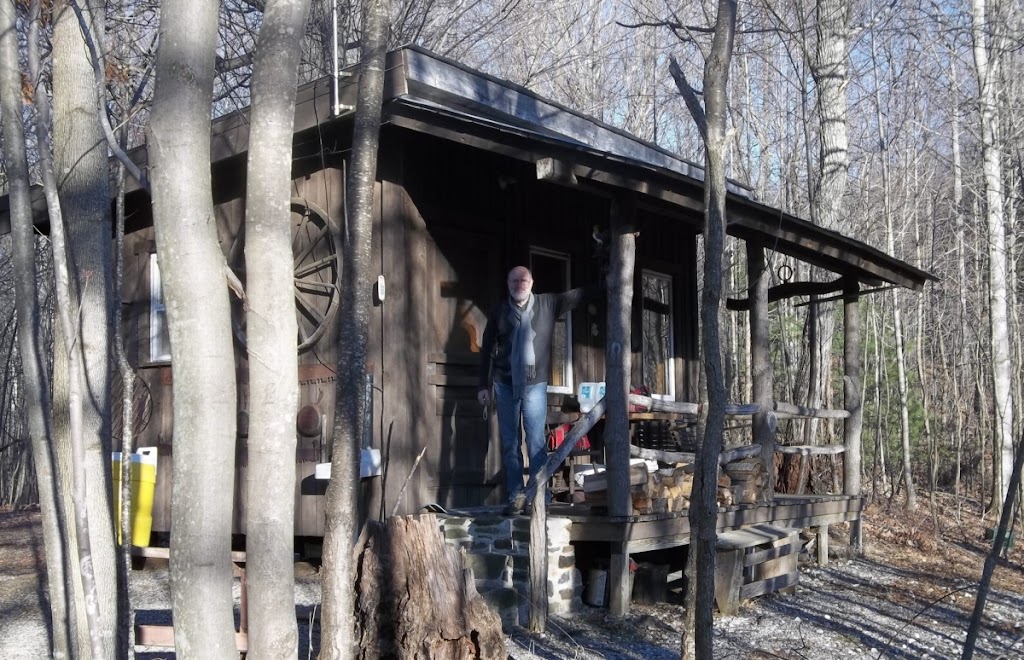 The View Cabin, a short distance through bear-infested woods
from the Stonewall Bed & Breakfast 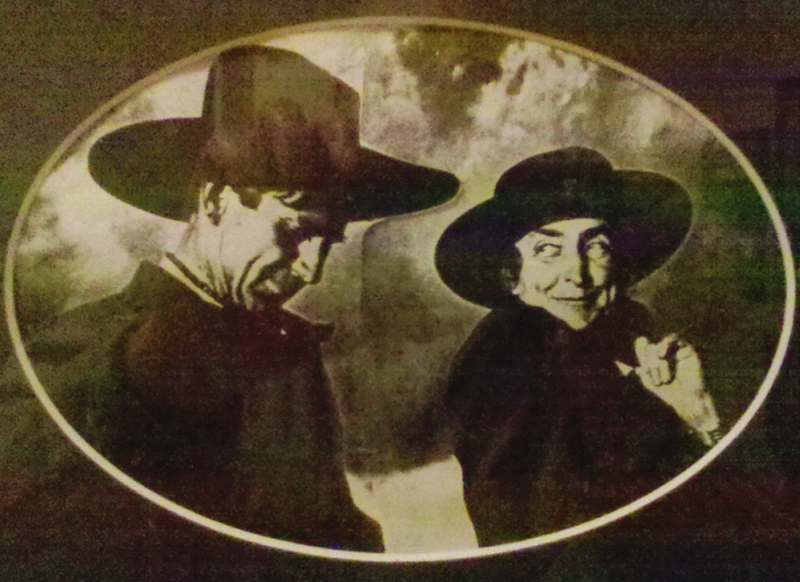 This random picture adorns the wall in the rest room of the main house at the Stonewall Inn
(along with a newspaper article about the sinking of the Titanic). I don't know what
this is from, but I love it. (Late addendum: an Ansel Adams photo of artist
Georgia O'Keeffe and Orville Cox at Canyon de Chelly National Monument, 1937.) 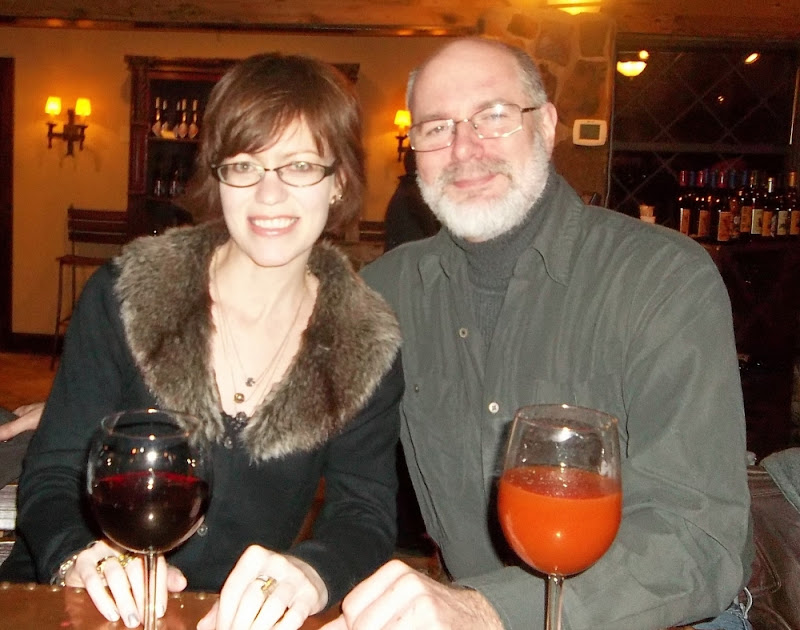 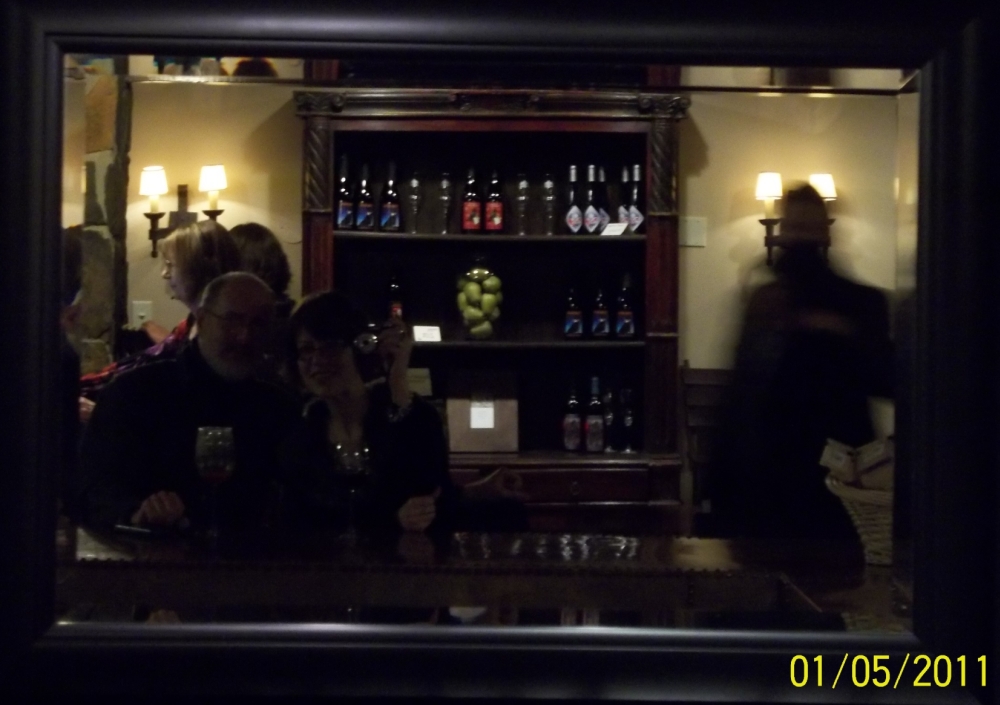 Brugger took this shot of us in the mirror at the bar at Chateau Morrisette.
I rather like it. 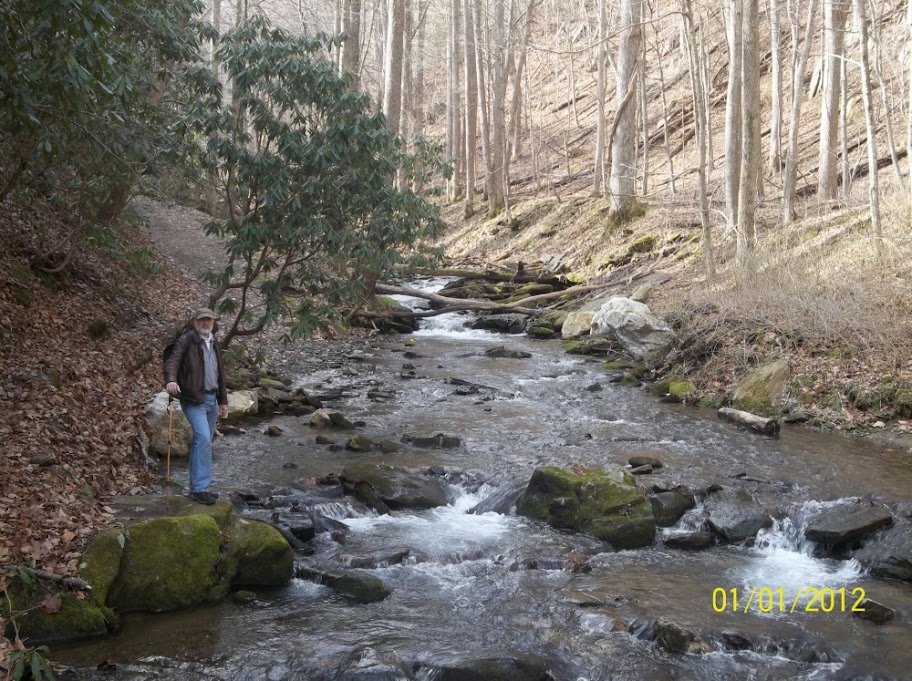 Along the trail in Rock Creek Gorge 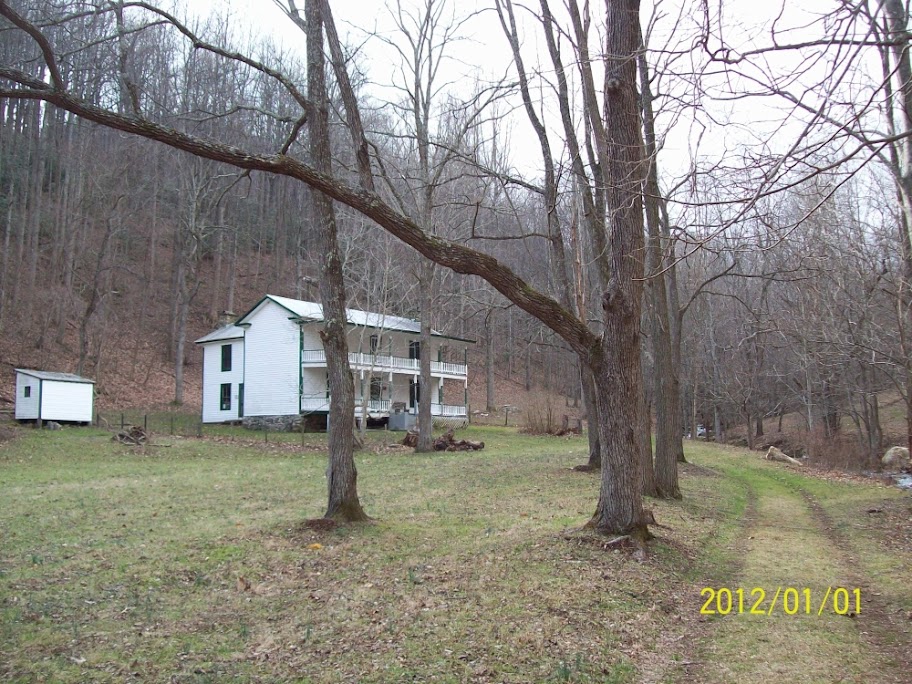 Old farmhouse back in Rock Creek Gorge. Surely, the very site of HPL's "The Whisperer
in Darkness," transplanted from Vermont to Virginia 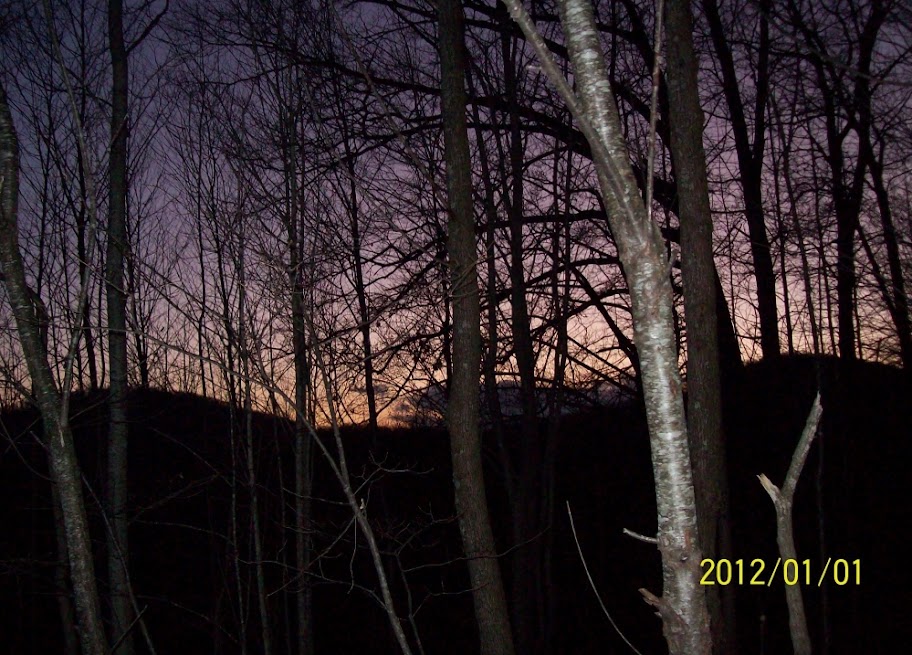 The first sunset of 2012 as seen from the View Cabin