Coming Soon to an Atomic Drive-In Near You 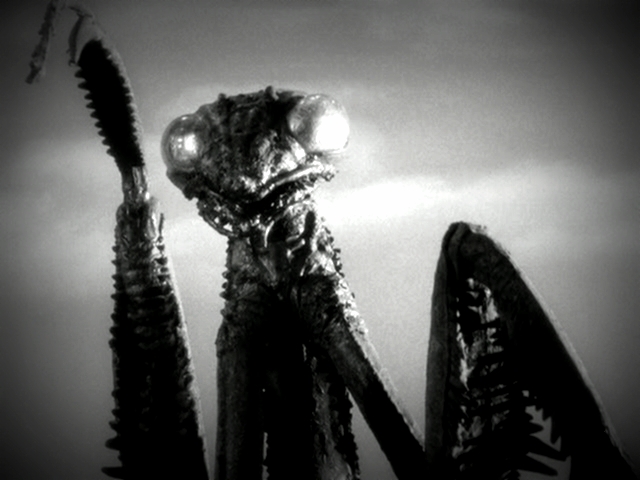 The name Mike Bogue is familiar primarily to readers of G-Fan magazine and, in that venue, mainly as a writer of nonfiction articles about daikaiju movies and the associated joys of being a diehard fan. Since Mike and I grew up about the same time, evidently in the same small town but several states apart, I have frequently enjoyed his exuberant reminisces about his visits with giant monsters on the big screen, many of which almost eerily reflect my own. Among our shared joys was going to drive-in theaters, when multi-feature monster shows were the order of the day — or night, rather — and some of us actually did go to drive-ins watch the movies.

Recently, Mike has leaped with all eight legs into the realm of fiction-writing, with a post-apocalyptic-alternate-reality-retro novella titled Atomic Drive-In. It has not been officially released yet — it is slated to be made available soon in various file formats for a modest fee; I will certainly convey that information here when it's available — but I got a sneak preview of this mutated monstrosity and figured a few thoughts from another hardcore giant monster drive-in-movie maniac would be in order.

To be clear, Mike is not a professional writer of fiction; however, his prose is at all times competent and frequently gripping. I'd go so far as to say that, despite its inevitable rough edges, Atomic Drive-In is more engaging than the efforts of many accomplished authors that I've read in the not-so-distant past. It's good for a PG-13 rating, with a wee bit of graphic violence and explicit imagery, perhaps a bit more than the cinematic properties it seeks to emulate — though this is, for the most part, anything but a drawback.

The story opens with a pair of friends, Brent and Jerry, both aged fifty-ish, visiting a closed-down drive-in theater, having made a deal with a mysterious, unseen character named Moonman to experience something beyond their imaginations. Moonman has provided them with an antique 1957 Chevy — complete with a charred skeleton in the front seat — that will transport them to an alternate Earth where the monsters of the movies they grew up with are quite real. Anxious to put this fantastic claim to the test, the two crank up the car... and before they know it, find themselves in an open, functioning drive-in theater running a Bugs Bunny cartoon. However, the theater itself proves to be something far different than they could have expected. They have indeed arrived on a parallel earth, but this is a war-torn, radiated world populated by mutants — human and otherwise — and the drive-in theater has been turned into a fortress against the things "out there," with movies played regularly to keep the entrapped population focused on something other than their own dire circumstances. The refugees' de facto leader, a gentleman named Isaac Carpenter, explains that some of their number have attempted to escape to the "other" Earth in the quantum-powered Chevrolet, but inhabitants of their reality are reduced to cinders if they attempt to pass through the barrier between worlds — hence the skeleton in the vehicle, who turns out to be none other than Carpenter's own son.

Before they know it, Brent and Jerry experience an assault by a giant dragonfly, which indeed resembles something out of one of the monster movies they love, but the heavily armed drive-in guards manage to dispatch it. Next, a giant gila monster attacks, proving somewhat more difficult to kill than the oversize insect. Once again, however, the powerful weaponry the refugees have at their disposal proves adequate to fend off the beast — but their supplies are perilously low, and they fear it is only a matter of time before they succumb to either the monsters' attacks or the radiation itself, which is steadily, insidiously working its effects on the DNA of the survivors.

Both Brent and Jerry find themselves infatuated with Carpenter's daughter, Lori, who is pregnant with the child of her missing fiancé, whose fate is unknown. Initially, she appears reticent to speak of either her fiancé or the baby, and both men soon discover why: her distended abdomen has become transparent, like a window to her womb, revealing a mutated horror inside her, which, to their shock, she feels compelled to love and protect. This revelation sends Brent retreating from her, but Jerry is more accepting of the situation and vows to protect Lori and her child at all costs.

But then a new horror appears: none other than Sean, Lori's fiancé, only now having grown gigantic and become quite mad, resembling none other than the mutated Colonel Glenn Manning in the horror classics The Amazing Colossal Man and its sequel War of the Colossal Beast. The mutant's onslaught is ferocious and deadly, but once again, after a violent battle, the drive-in refugees prevail. Finally, however, the survivors' stronghold is attacked by the two most terrifying monsters yet: a gigantic preying mantis and a monstrous wolf spider. In the midst of the attack, the two creatures turn on each other, wreaking havoc as they fight to the death.

Unable to deal further with the hideous reality he was initially so intent on exploring, Brent decides to return once and for all to his rightful world, while Jerry opts to remain with Lori and her people — for he has himself succumbed to the mutating powers of the widespread radiation. Just as Brent is making his escape, a radio broadcast warns of an impending, horrific attack, and he knows he must leave his best friend to grapple with the consequences of his fateful decision....

Mike Bogue constructs a grotesque post-apocalyptic world, described in details more typical of contemporary genre authors, but at its heart, the story remains true to its 1950s roadshow–inspired origins. A few niggling problems do spoil the flow of the narrative, such as the characters going back and forth between worlds in the interludes between monster attacks; for the most part, they're unnecessary and feel more like padding than true development. Still, you just don't get that many knock-down-drag-out tales about giant monsters, mutants, and alternate realities, and Mike pretty capably covers all the bases. I hope the story will soon see widespread release and you can check it out for yourself. I'll be sure to post an alert when The Atomic Drive-In is open for business.
Posted by Stephen Mark Rainey at 11:42 PM