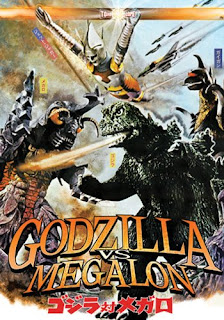 For way too many years, Godzilla fans have eagerly awaited an officially sanctioned U.S. DVD release of Godzilla vs. Megalon — ironically, one of the most reviled entries in the Godzilla series. Till now, no licensed U.S. release has existed, so fans who have never availed themselves to the Japanese Region 2 DVD edition have made do with bootlegs; poor quality foreign editions; or unauthorized pan-and-scan versions (which several U.S. distributors released in the 1990s and early 2000s when they assumed the movie was in public domain; it wasn't, and Toho's near all-powerful attorneys had them all yanked). Media Blasters/Tokyo Shock had plans to release a deluxe package that included all kinds of extra material, as they did with the Destroy All Monsters release from last year; unfortunately, they had not received approval from Toho for the extras for either movie, so — once again — Toho's near all-powerful attorneys had the Destroy All Monsters discs yanked and stalled the release of Godzilla vs. Megalon until such time as a satisfactory licensing deal could be worked out. Tokyo Shock finally got approval to release a bare-bones DVD of Megalon with no extra features, and that's what we currently have in circulation. A Blu-ray edition is in the works that is to include the extensive extras, but it won't be hitting the market for some time yet.

I saw the U.S. theatrical release of Godzilla vs. Megalon in 1976 at the drive-in theater in my old hometown. My younger brother accompanied me, and I'm not sure he's ever forgiven me the experience. It's not my least favorite of the Godzilla movies... but, to be sure, it's damn near at the bottom of the list.

Toho made Megalon during the one of Japanese film industry's worst economic downturns, and the movie advertises that fact in big neon letters. Like Godzilla's Revenge and Godzilla vs. Gigan before it, Megalon comes loaded with stock footage, and the new special effects scenes are, for the most part, sparser than sparse. There are a few exceptions, such as an impressive sequence where Megalon destroys a dam and smashes a bridge. Visually, the movie does benefit from very colorful, widescreen cinematography and quite a few spectacular explosions, courtesy of special effects director Teruyoshi "Mr. Pyrotechnics" Nakano. The monster wrestling matches have some entertainment value, though, by and large, they're simply silly — particularly the empty suit flinging and distinctly non-giant-monsterish hopping and flopping about, as the critters are wont to do. The Godzilla suit is one of the worst ever, being quite scrawny with a muppet-style face and balloon-like feet and dorsal fins. Megalon is the neatest looking one of the bunch — a giant, anthropomorphic insect, more or less — but, sadly, in execution, it is mostly a big buffoon. A shame, it is.

As with a number of the later Showa-era Godzilla movies, the story is nothing to get excited about. Numerous nuclear tests have done serious damage to a mysterious undersea kingdom known as Seatopia, so — rather than reveal their existence and say "hey, knock it off!" to the surface dwellers — the Seatopians decide to send their guardian monster Megalon up from the depths to wipe out humanity. To accomplish this, they require the use of a robot called Jet Jaguar (to act as Megalon's guidance system, so to speak), created by inventor Goro Ibuki (Katsuhiko Sasaki). Ibuki lives with his little brother Roku-san (Hiroyuki Kawase) and friend Jinkawa (Yutaka Hayashi); Seatopian agents attempt to eliminate the lot of them in order to take control of the robot, but they manage to escape, and Goro overrides Jet Jaguar's altered programming by using his personal remote control unit. He sends Jet Jaguar to Monster Island to fetch Godzilla, who happily agrees to come whoop some Seatopian ass. In response, the Seatopians call on their friends from Space Hunter M Nebula and ask them to send the monster Gigan around to help out their own big critter. Jet Jaguar, evidently possessed of unfathomable technological skills, grows to gigantic size to better match its rivals. Together, Jet Jaguar and Godzilla get into a big old scrap with the villainous critters and — believe it or not — eventually get the better of them.

To me, the most satisfying daikaiju movies are the ones in which the producers' approach is based on the idea that "if the world of giant monsters existed, it would be like this." Godzilla vs. Megalon is not one of these. It's one of those in which the producers say, "Well, no, giant monsters don't exist, so we can just throw in any old shit we want to." This is not to say I don't enjoy this more lighthearted, kid-friendly approach; I do. It's just that it's a cheap and easy way to avoid constructing or relying on any sort of internal logic. Perhaps the most ridiculous example of this is Jet Jaguar growing to Godzilla's height, which Goro, its inventor, explains by saying, well, he must programmed himself to grow — as a survival mechanism. Yeah, all right. I know, it's a Godzilla movie, but still....

Godzilla vs. Megalon does contain what must surely be one of the most bizarre schemes ever devised by its protagonists. In order to reclaim their laboratory from the Seatopian agent who has taken it over, Goro and Roku-san visit a hobby store and "borrow" a large, radio-controlled F-86 Sabre jet model. When they return to the lab, they knock out the external video surveillance system, and when the Seatopian agent comes outside to see what's happened, Roku-san lets fly the model plane, which boops the agent in the head, knocking him senseless long enough for them to get back inside. Perhaps a brick would have been simpler...?

Back when the movie was first released, I quite hated Riichiro Minabe's musical score, having been so accustomed to Akira Ifukube's majestic monster themes. Nowadays, I actually enjoy Minabe's jazzy, lounge-lizard-style music, both on its own merit and because its dated quality helps place the movie firmly within its unique historical context. When I listen to daikaiju soundtrack music, it's actually one of the scores I listen to most.

The Tokyo Shock DVD, for a bare-bones release, is pretty much okay. The print and transfer quality is quite good — a darn sight better than anything we've seen before on this side of the water, perhaps save the widescreen print that the Sci-Fi Channel aired a good many years ago, which I did have recorded on VHS tape. It would be nice to have the extra features, but for the moment, I'm pretty content to get the movie itself in decent quality. It's not as if I'm going to be watching it very frequently anyway.... 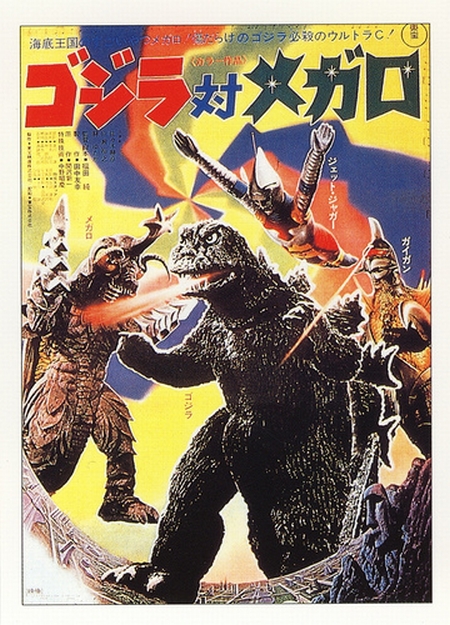 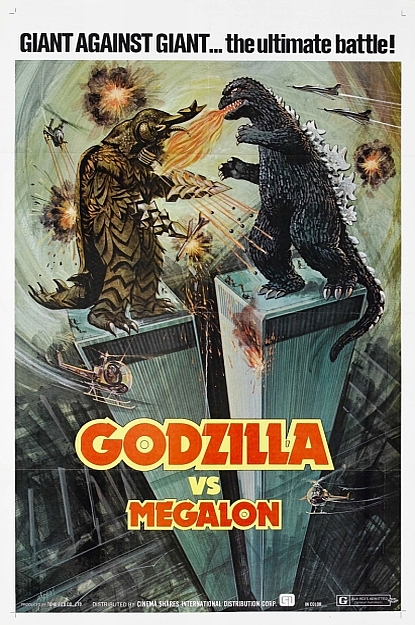