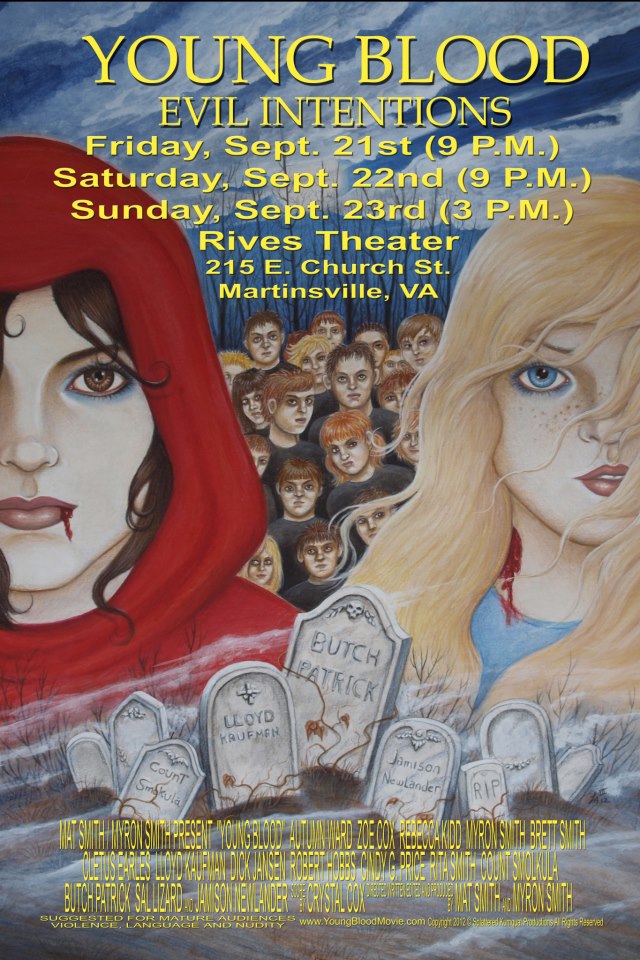 And more on the subject of vampires....

If you've checked in here recently, you've no doubt seen my little blurbs for Young Blood: Evil Intentions, a new indie vampire flick made by Martinsville natives Myron and Mat Smith, both nephews of my longtime Martinsville classmate Sarah Smith. Back in March, I had been on the set to appear as an extra (see Young Blood: The Movie, March 9, 2012). The premiere was last night at the Rives Theater in uptown Martinsville — the same theater where I saw the vast majority of the most memorable monster pics of my youth — so Kimberly and I rode up from Greensboro after work to make a blood-filled evening of it.

First stop was Rania's Restaurant, one of my favorite venues in town, where we met Sarah, her brother Dod, our mutual friend Susan Fleenor, and some of their respective families and friends. Oh, my gracious me — look! Sarah is a vampire! Wait... there are other vampires at the table. How cool is that? Unlike some bloodsuckers, Brugger and I do drink wine; in this case, a most delightful 2008 Ecco Domani Pinot Noir. 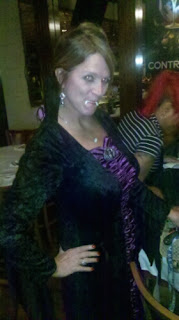 Then it's on to the Rives theater, just around the block, where we find a long line has gathered well before showtime. Here, I run into an old friend from childhood, Pete Wells, now a Georgia native, as well as Young Blood poster artist — and former Deathrealm contributor — Leon Atkinson. In fact, it's a sold-out show, as a fair percentage of Martinsville has turned out for the event.

Here's the story: "Raised in a torn home, young Anavey discovers she has the ability to make big changes, with even bigger consequences. She, with the loyal help of her little sister Anastasia, form an army of young, blood-thirsty vampires to kill all the adults. No one is safe, especially the girls' mother, Olivia (Rebecca Kidd), and their abusive, overbearing stepfather, Dale Buckmeyer (Myron Smith). Will Anavey’s dreams become a reality? Will Anastasia escape the cult before it’s too late? Will the angry mob put an end to the insanity?"

In old-timey roadshow fashion, the movie opened with a classic Popeye cartoon, followed by an MPAA-style warning that the following movie "most likely would have been rated R." And aye, that it would. Young Blood is a screaming hoot from start to finish, 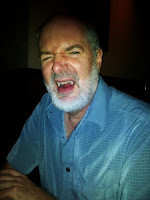 with over-the-top performances, over-the-top sight gags, plenty of local scenery, a perfect musical score, and a few brief appearances by ye old dude, including a little ad-libbed speaking role. The young leads, Autumn Ward and Zoë Cox, are absolutely engaging. Without a doubt, one of the movie's standout features is Troma Entertainment actor Lloyd Kaufman as an alcoholic newscaster, who periodically breaks into the film to report on the shocking events happening in the little town of Martindale, VA. His interplay with Star News reporter Dick "DICK!" Jansen is beyond priceless — and his final appearance at the climax literally stops the show, which rightly brought the house down. Now, having had a little hand in this movie and knowing many of the people involved in its production, my view is anything but objective, but suffice it to say I had the best time at the premiere, and I imagine that just about anyone with a love for indie horror flicks — and a keen sense of humor — will find Young Blood a monstrously enjoyable vampire outing. I'm not sure when the DVD release will be available, but I'll post the info when I get it.