A couple of weeks back, local journalist Karen Phillips interviewed me for the "Local Talent" section in YES! Weekly, one of Greensboro's leading free weekly tabloids. The published article is essentially a capsule review of the interview she conducted with me, and since the original was a pretty lengthy piece, to which I had devoted considerable time responding, I decided to seek permission to reproduce it in its entirety here. Karen and the editor of YES! Weekly graciously agreed, so here it is — a conversation with Mr. Stephen Mark "Damned Rodan" Rainey. Be afeared. Very slightly afeared.


1. When did you move to Greensboro? Why?
I moved here from Chicago in 1987 to work for the late, lamented Precision Typographers. I grew up in Martinsville, VA, but I had lived in Chicago for several years and quite enjoyed it. Unfortunately, the company I worked for had hit the skids, so it seemed a fair time for my wife (now ex) and I to move nearer to my old stomping grounds. It was a good move, though looking back, I wish I’d had a few more years in Chicago. It’s a great city.

2. What did you always want to be when you grew up?
An astronaut. When I was a kid, the space program was going great guns. In kindergarten, I could name every spacecraft and every astronaut that had been or would be going into space. Somewhere along the way, I learned that astronauts had to be good at math. Coal mining suddenly looked to be a more realistic option.

3. Where did you go to college?
I went to Ferrum College, Virginia, for two years and earned my Associate Degree; then I went to the University of Georgia in Athens for my Bachelor of Arts degree.

4. What made you decide on English and writing?
In college, I had the idea that I might become a commercial artist (you know, for all those jobs where you get to illustrate Godzilla and such), so I majored in drawing and painting. Once unleashed upon the real world, I went to work in the graphics field all right, but I had to unlearn everything I had learned in school several times over. I had always been keen on reading horror and science fiction, and, during my school days, I tried my hand at writing a few scary stories. Yes, they pretty well sucked. But as my profession required me to move steadily away from the kind of art for which I was trained, on my own time I gravitated more and more toward writing. I began to submit my short stories to various publications, both big and small, and eventually some of the smaller presses began picking up my work. Finally, I broke into some of the bigger, better-paying publications, and then there was no going back. In 1987, I created Deathrealm magazine, a quarterly that specialized in horror fiction, and it had a nice, decade-long run, under a couple of different publishers. During that period, I essentially left the art field behind, and since then my creative focus has been almost exclusively on writing. 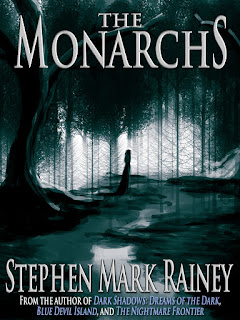 5. What made you decide to hone in on horror fiction?
I was the world’s most terrified kid. My earliest memories are of vivid, horrifying nightmares. (Mind you, I’m sure that watching The Outer Limits, The Twilight Zone, and umpteen monster movies a week had nothing to do with this.) As I got older and became an avid, even compulsive reader, I found myself drawn to horror and science fiction tales. I loved Poe, H. G. Wells, Jules Verne... you know, the classic stuff. In college, I discovered H. P. Lovecraft, and that sewed it up. Like so many contemporary writers of the scary persuasion, my earliest work consisted largely of Lovecraft pastiches. I grew out of that phase, of course, but to this day, I still frequently write Lovecraft-inspired tales and have been fortunate enough to be considered, at least by some, as one of “the New Lovecraft Circle.” I’ve done a lot of work for Chaosium’s Cthulhu Mythos anthologies and edited a volume of Poe-inspired tales for Arkham House, which was the first publisher to anthologize Lovecraft back in the day. That’s all satisfying stuff.

6. How many books have you written?
I have a fair body of work beyond just “books,” so here’s a brief summation: six novels (Balak, The Lebo Coven, Dark Shadows: Dreams of the Dark (with Elizabeth Massie), Blue Devil Island, The Nightmare Frontier, The Monarchs); one novella (The Gods of Moab); five short story collections (The Fugue Devil & Other Weird Horrors, The Last Trumpet, Legends of the Night, Other Gods, The Gaki & Other Hungry Spirits); three scripts for Big Finish’s Dark Shadows audio drama series (The Path of Fate, Curse of the Pharaoh, and Blood Dance); and about a hundred published short stories. I’ve also edited several anthologies, and for ten years I edited the award-winning Deathrealm magazine.

7. What was your most recent project?
A novel titled The Monarchs, which is forthcoming from Crossroad Press, probably around New Year’s. It will be released as both paperback and e-book. It’s sort of a hybrid southern gothic/ Lovecraftian horror thriller. The original idea came from a trip out to Elizabeth City a few years back — before I owned a GPS — during which I managed to get lost in the Dismal Swamp. At the time, the experience was pretty disconcerting, but the end result was what I think is a pretty fair novel. Nowadays, I’m very thankful for the GPS, but it does kind of take the fun out of getting lost.

8. Tell me a little about your blog.
I keep it primarily for me — it’s more or less just a journal — but at the same time, I try to make it entertaining for casual visitors. I carry on about geocaching (my favorite recreational activity; see question number 12, below), writing, relationships, travel, dining, current events, and occasionally — when I’m feeling masochistic — politics and religion. You can find The Blog Where Horror Dwells at http://stephenmarkrainey.blogspot.com 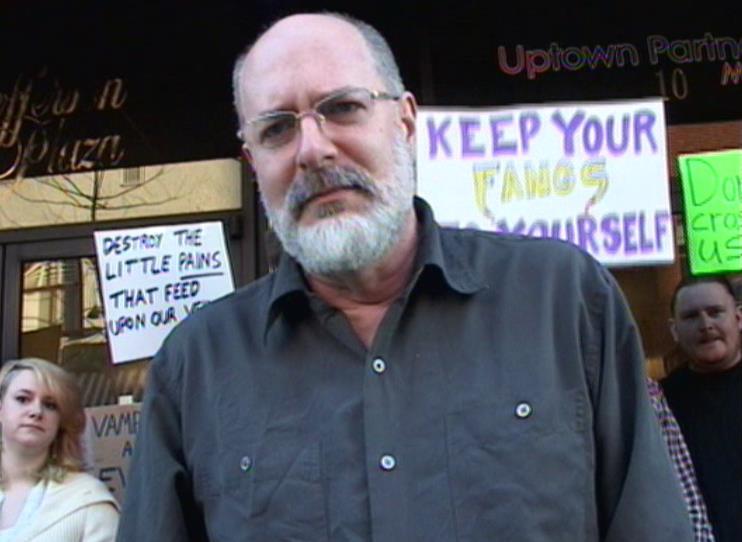 9. Tell me a little about the film, “Young Blood: Evil Intentions” and how did you become cast for that film?
Mat Smith and I have been passing acquaintances for several years — his aunt, Sarah, was a classmate and good friend of mine from my Martinsville days (she also went to Ferrum at the same time I did). Mat put me on the mailing list for updates about Young Blood, and when he made a call for extras for several scenes in Martinsville, I figured, what the hell, I could pop up to town for an afternoon or two and hopefully show up in the movie. Mind you, mine is just a tiny little part — mostly just another face in the mob scenes. But while we were filming, Mat asked me if I could ad lib a line or two about the vampire situation in town, so I said sure. At the very end of the film, there I am, in all my grumpy glory. It’s a wonderful little film. I had a feeling from the start it was going to be good fun, but I had no idea how entertaining it would actually prove. Mat and Myron clearly had a great time doing it, and in the film, that attitude is pervasive and contagious.

10. Are you interested in getting more into the acting field?
On some days, I can’t remember my name without looking at my driver’s license, much less memorize lines, so I’m probably best off sticking to writing and geocaching.

11. Where are you currently employed?
I have the best of day jobs. I am the graphic services coordinator at The Education Center, publisher of The Mailbox magazine and book lines. We produce educational materials for elementary school teachers. I love the work and the people there. Plus, it’s my way of contributing to education without actually being in the classroom, for which every child in the United States best be eternally thankful. 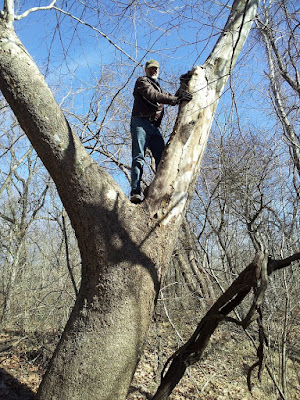 12. What’s the next project you have in line?
I’m working on a new novel titled The Night Cache. It’s an honest-to-god book about geocaching. It has a horror slant, of course.  In case you’re not familiar with geocaching, it’s a kind of high-tech scavenger hunt, in which you use a hand-held GPS to search for hidden containers. Each geocache contains a logbook, which you sign when you find the cache, and then you log the find at www.geocaching.com. There are thousands of caches in the Triad. They can be big, small, easy-to-find, or exceptionally challenging. Caching has taken me into all kinds of settings that I never knew existed, and the resulting adventures have inspired quite a few tales. Sometimes you end up in abandoned wells, up in trees, in grain silos, in underground pipelines, in caves, in graveyards, out on trails in the middle of the night... all kinds of places. The novel incorporates elements from many of the actual cache hunts I’ve been on, but... needless to say... I’ve warped them so they fit comfortably into Lovecraft’s Cthulhu Mythos. We have a very active geocaching community in the Triad, and I think most cachers will get a kick out of the book. Of course, my hope is that I successfully craft it so it will appeal just as much to readers who don’t know diddly about geocaching as those who do. I’m at about the halfway point in the writing.

13. What are you going to be for Halloween this year?
A horror writer, I expect. Or a serial killer. Or both.

14. Do you decorate your house?
Most years I do a little something for the house. I rarely go all-out with it, the way I used to — something about so much to do, so little time. Now, I’ve warded off quite a few trick-or-treaters by placing an old coat rack in the front door, hanging a lamp with a black light bulb in it, covering it with a sheet, and running a fan behind it. The result is a pretty creepy dancing ghost. Then I put speakers in the windows and play spooky music or sound effects. I’ve been amused by some of the youngsters who come round, give the place a good look, and say, “I-I-I’m not going down there....”

15. What’s your favorite candy to give out?
Reese’s Peanut Butter Cups and Kit Kat bars. But who said anything about giving them out?

16. Please feel free to add a spooky tale or another other relevant info about yourself that you want to audience to know.
Hell, I’m off to go geocaching. And then a Halloween gathering this evening. This is my favorite season. But then you knew that.

And there you have it. Visit the YES! Weekly site here. Thanks to Karen Phillips and the editorial staff for thinking of me and featuring me in the October 24, 2012 issue.
Posted by Stephen Mark Rainey at 7:55 PM