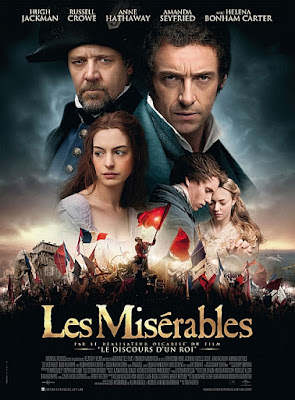 I wasn't really planning to go see Les Miserables, but I received an invite to do this thing, so that was that. I've never seen the stage production, and I only read the Classics Illustrated comic adaptation when I was a youngster, so I had no preconceived notions about the story. As for the film, the only real advance knowledge I had came from a featurette I saw a while back about the actors actually singing their parts live rather than being dubbed. Rather than an in-depth review, I'll just offer up a few thoughts, for I did find it a significant, noteworthy cinematic production.

There are a handful of musicals that I really love, most going back to childhood: The Wizard of Oz, of course; The King and I; My Fair Lady; Camelot; South Pacific; even The Sound of Music, to some degree. In more recent years, I've been quite taken with Sweeney Todd and Wicked. In general, though, the musical is not a theatrical form of which I am terribly enamored. Les Mis offers a handful of impressive songs — certainly the numbers are beautifully staged and performed — but by and large, I can't say I found much of the music memorable or otherwise distinctive.

Technically, Tom Hooper's Les Mis is a beautiful film, with loads of CGI that's obvious yet artful; it blends rather than intrudes.The stylized sets, virtually to the last, feel dank and claustrophobic; certainly apt, given the setting. Thankfully, there are at least a few grand, panoramic shots strategically placed amid the scenes to offer some much-needed brightening, particularly after we have been confined to the grim, utterly depressing chambers of the paupers for such extensive portions of the very lengthy running time (157 minutes).

I was quite taken with the cast. Jackman is reliably excellent, and here, as former convict-turned-respected-mayor Jean Valjean, he turns in a superlative dramatic performance, with singing far beyond mere competence. I must say, Anne Hathaway surprised me with her masterful, emotive performance as Fantine; I've always given her credit as an actress, and this sewed it up for me. By the conclusion of "I Dreamed a Dream," I was in tears — one of two or three such occasions in the film. Now, whatever his personal lack of charm, I admire Russell Crowe as an actor; in fact, I can scarcely think of a performance in which he hasn't excelled. He does everything right in Les Mis except sing. He clearly gives it his best, but an operatic talent he is not. Still, I can't fault him but so much, for though he may not shine as a vocalist, he pays the character of Inspector Javert his absolute due. Helena Bonham Carter as Mme. Thénardier, the Innkeeper's wife.... well, she basically reprises her performance as Mrs. Lovett from Sweeney Todd. Certainly not a bad bit of casting for this character. And speaking of the Innkeeper... M. Thénardier... comic virtuoso Sacha Baron Cohen chews up the scenery — not to mention rotting meat, artificial appendages, cat tails, and bugs. If ever a production needed some comic livening, this is the one, and Cohen offers it up in spades. Amanda Seyfried as Cosette mostly wanders doe-eyed through the film, simply because that's the character's ordained fate, but in a couple of songs she does emote effectively.

I found the prevalence of Cockney accents in 19th-century France most disconcerting. Scarcely a trace of authentic French, or even French accent, to be heard. I can understand the actors eschewing what might play as mere affectation, but more neutral vocalizing might at least dull the shock of it, particularly in the case of the lad Gavroche, played by young Daniel Huttlestone, who might as well have come off the streets of Whitechapel in My Fair Lady.

I quite concur with many of the accolades bestowed upon director Tom Hooper for his work on this big, oftentimes impressive piece of theater. In numerous ways, it's a brilliant achievement. Yet, while individual moments of this film moved me as much as any film can, on the whole, I felt strangely unaffected, particularly during the second half the movie, when the young revolutionaries begin their plotting and the love story between Cosette and Marius — played at least competently by Eddie Redmayne — takes center stage. After the first hour and a half, I was really beginning to wonder whether my posterior would quite hold out till the end of the film. For all its virtues, Les Mis just doesn't call me to even attempt to watch it again. I suppose I might welcome an opportunity to check out the original stage production, but I would probably want some wine first.
Posted by Stephen Mark Rainey at 11:59 PM