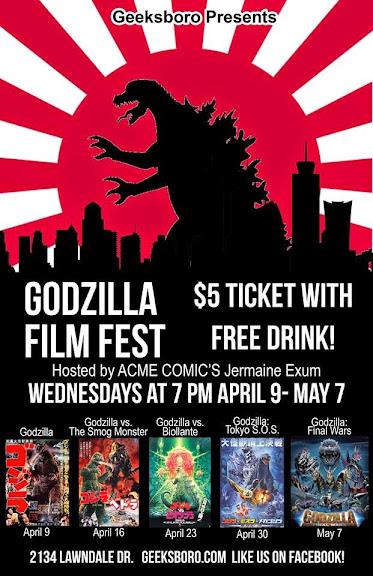 If were still a very young man, say, twelve or fifty four years old, I might get pretty excited over this. Last summer, the Geeksboro Coffeehouse Cinema here in Greensboro ran a couple of Godzilla movies outdoors — the original Godzilla and Destroy All Monsters, if I recollect properly — though I didn't manage to get over to see them. Coming up at Geeksboro, to celebrate the Legendary Pictures Godzilla looming on the theatrical horizon, we have a regular borgasmord of daikaiju. (What, you never saw that Underwood Deviled Ham commercial with Mason Reese way back when?) Matter of fact, I recently went on a bit of a Godzilla DVD binge, and the latter three of these here — Godzilla vs. Biollante, Godzilla: Tokyo SOS, and Godzilla: Final Wars — were among those still in the queue to satiate the Godzilla craving, so I reckon I'll hold off watching them (for the 30th, 20th, and 10th times, respectively, or something like that). Now, I must say, I've yet to figure out why Ms. Brugger seems to think that a place called Geeksboro is just the ticket for a daikaiju enthusiast such as me, but... whatever. It's not as if I ever once pestered the owner of a drive-in theater in Martinsville to change the line-up of their movies so they'd run Destroy All Monsters first, so my dad would actually take my friend Frank and me to see it on my twelfth birthday. Really, I didn't. That story was a lie!
Posted by Stephen Mark Rainey at 7:03 PM