That's the name of an old and distinctly difficult geocache hidden in Stokes County, NC, and it was today's target cache. It's a multi-stager, each stage providing its own unique challenges, ending at a particularly scenic area not far from Hanging Rock State Park.


Scott "Diefenbaker" Hager, Jeanne "Cantergirl" Allamby, and I got together once again this weekend, starting out bright and early to make the trip out to Stokes County and hopefully conquer this aging but still vicious beast. It was originally hidden in 2004 and has been modified by the cache owner a few times over the years. To get from stage 1 to the final, you end up taking a fairly lengthy, very scenic tour of the county, so this hide is anything but a quick park-and-grab. We had trouble on more than one occasion due to our GPS coordinates bouncing all over creation, and at the final, Diefenbaker's ground zero coordinates and mine differed by a good hundred feet or so. In the end, my decrepit but trusty old Garmin eTrex H, which is held together by duct tape, put me within two feet of the hide. Signing the logbook on this one was a real pleasure, especially after having undertaken a good physical challenge or two to get where we needed to be.

Well, Diefenbaker and I undertook a good physical challenge. Cantergirl opted for the longer but considerably less hazardous route. She, no doubt, was the smart one, for after it was all over Diefenbaker and I rightly took turns calling each other Dumb Ass.

Of course, that's all as may be. In the end, all three of us dirtied up the cache's logbook with our signatures. It's all in a day's work to earn those smileys. That makes number 7,114 for Old Rodan. 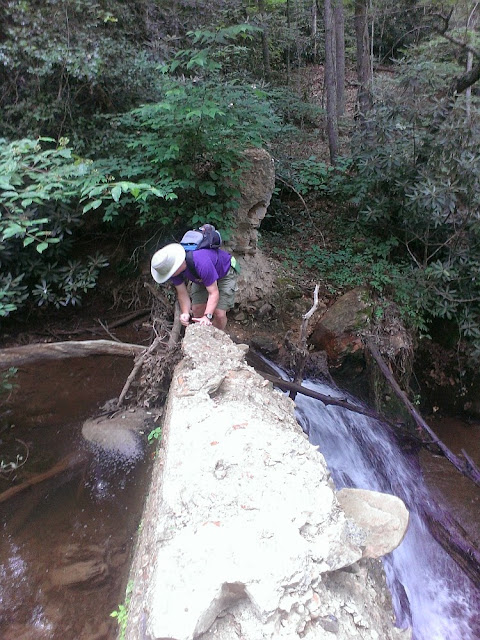 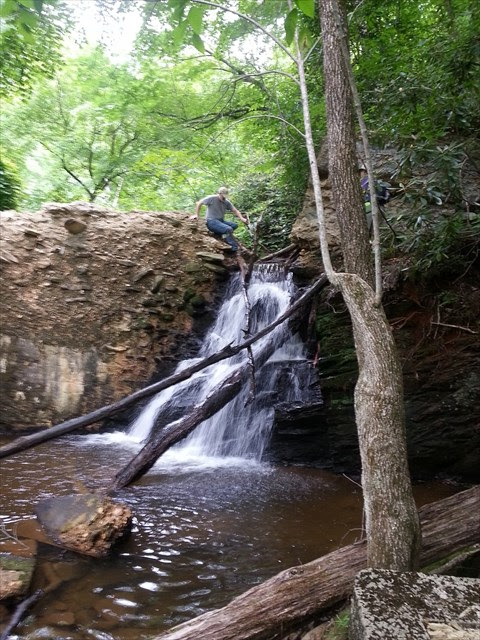 L: Diefenbaker making his way across the very slippery waterfall; R: Damned Rodan following in Diefenbaker's
footsteps, unaware that Diefenbaker has booby-trapped the route. What a brute!

Once again, I raise a glass (cup?) of chai in honor of the Geocache King!! With all your other writings, do I see a memoir about caching in your future??

What do you know of the history of that old dam? Interesting territory? How close is the dam to Hanging Rock State Park? Looks like it's in the Sauratown Mountains, for sure.

Haven't found any info on the old dam. It looks like there was probably a mill there many years ago. The site is just a few miles north of Hanging Rock.

Beth: It might be entertaining to compile all the geocaching blogs into some kind of narrative. Hopefully, not of the snoozer variety. ;)