Owls, Yellow Jackets, the Day of the Triffids 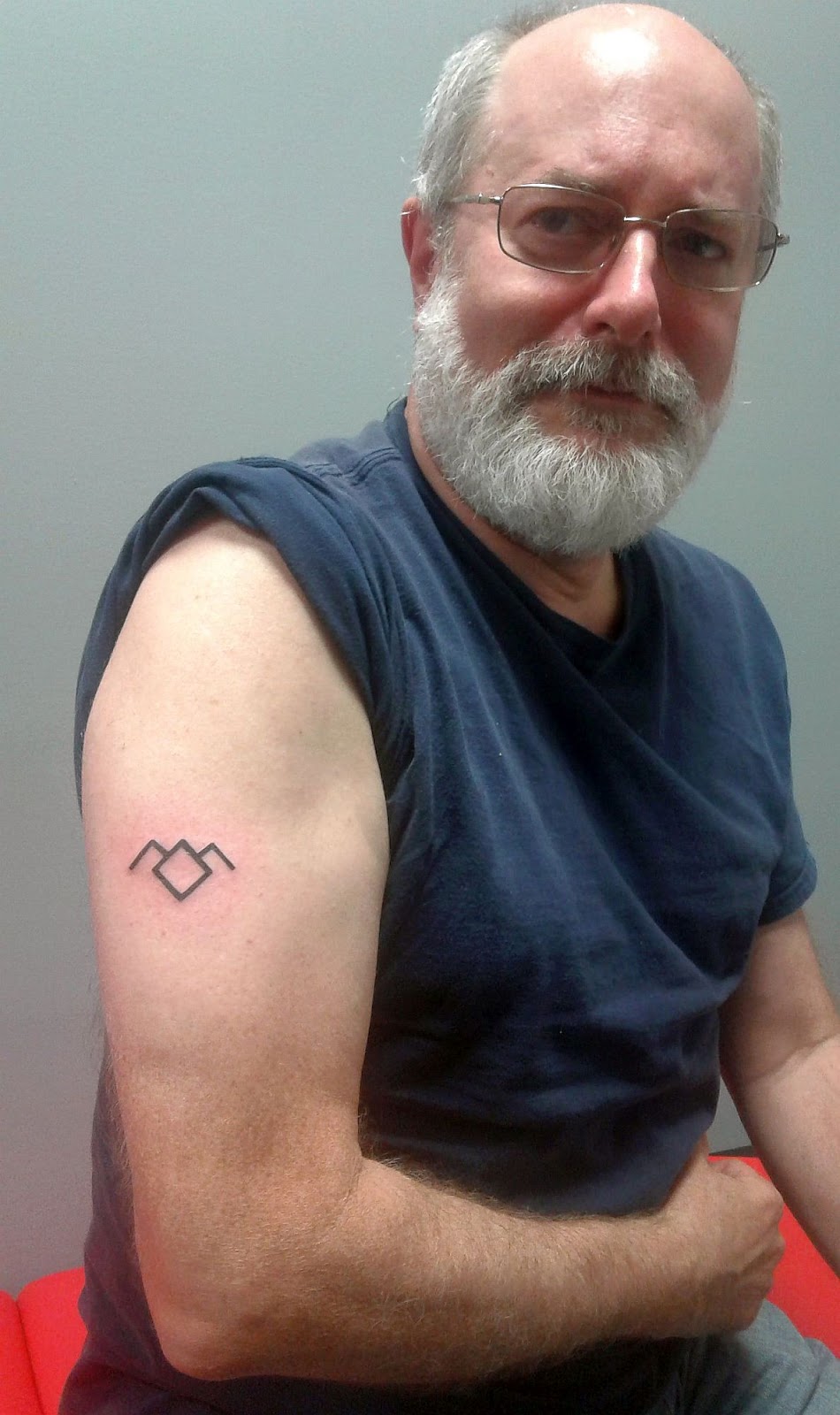 So I got this weird design on my arm, see. While I was out and about last night, I saw a bright light, heard a strange voice, and that design just appeared. It's like, sometimes, life is stranger than shit.

Okay, it seemed the thing to do at the time. A few nights ago, Ms. Brugger indicated she was thinking about getting a new tattoo (she's got a couple of sharp ones, not in plain view), and we got to talking about possible subject matter, and Twin Peaks came up, and then... well... I just happen to know a brilliant young artist named Eliseo whom I used to work with, and he recently got his tattooing license. So, I thought, maybe carrying some Twin Peaks around with me from here on out would actually be a cool thing. I was pretty sure I didn't want "Fire walk with me" inscribed on my left arm, for it might become necessary to lop the whole thing off. It would have been cool to have the entire Owl Cave map tattooed on my back, but I didn't think I wanted to start with anything quite that involved. But the symbol in Owl Cave — the design on the ring that comes from the "other" place in Twin Peaks — well, say no more!

And it's done. I'm very pleased with the work, it didn't hurt, and those owls, indeed, aren't quite what they seem.

Due to all the rain we've had recently, my yard has become a tropical rain forest, and it's only now dried just enough to actually mow it. Since I had spent yesterday getting the ink treatment, I figured I'd better get the damned grass mowed today, lest my neighbors deduce that Triffids have begun taking over the neighborhood. And I did this thing, I went out after work, started to pushing the machine around the yard, getting things all neat and tidy around the old tree stump out back, and then — ZAP! — it's like a little bullet just went into my ankle.

Oh, crap. It's yellow jackets. Lots of them, pouring out of a hole near the base of the stump. One of them tags me on the leg, right next to where the first one got me. One actually gets into my boot and stings me on the ankle. While brushing some off, I get hit between the thumb and forefinger of my left hand. To my amusement, I discover that one is stinging the hell out of my boot lace, and he's hung there. Well, that's one ignominious death I get to deal, so score one for the old man.

Fortunately, the critters didn't swarm me in earnest, and I was able to move away from the nest without being pursued. I figured I'd take care of the nest after dark, so I went on about my necessary business, until... hang it all... the mower shudders, coughs, and dies. It had been sounding a bit off to begin with, and now it was altogether off. Couldn't resuscitate the old thing, alas—carburetor, I expect—so that ended my plan to conquer my yard full of Triffids. Sorry, neighbors, I'll fight that fight at the earliest opportunity.

Yeah, I was feeling a bit sore from the stings, so I was just as happy to come inside, get cleaned up, and make myself a Damned Rodan's Ghost Pepper Bloody Mary. It was a good 'un, and when I finished it, I had plenty to take my mind off the pain in my extremities. A damn fine drink, I can tell you, a damn fine drink indeed.

If you're anywhere near Greensboro, though, keep your distance from my place. There are Triffids.
Posted by Stephen Mark Rainey at 10:44 PM