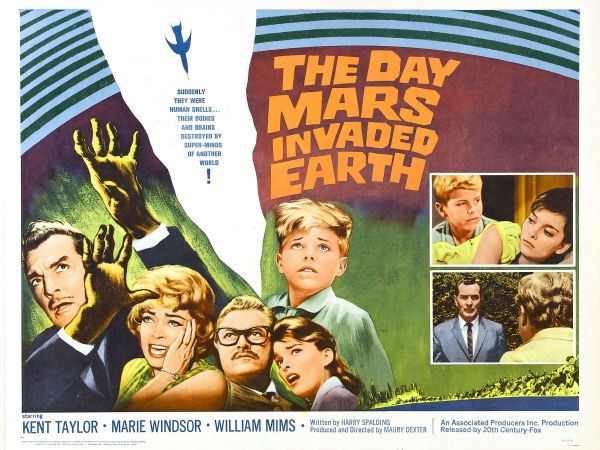 Most of my favorite SF/horror movies from the 1950s and early 1960s became my favorites because I saw them during the most impressionable years of my wee little life and they positively warped my wee little psyche. Some of them are enjoyable to revisit for nostalgia's sake, while others actually hold up as dynamite films. Examples of the former might be 13 Ghosts, Teenagers From Outer Space, Not of This Earth, and The Sound of Horror; a few of the latter would be The Day the Earth Stood Still, The Time Travelers, Night (Curse) of the Demon, and Invasion of the Body Snatchers. It's somewhat rarer for movies from that era to become favorites if I discovered them later in life, but it has occasionally happened. I learned about Attack of the Crab Monsters in my childhood days (no doubt by way of Famous Monsters of Filmland), but I never got to see it until well into adulthood. Stupid movie, but damn it's fun. I love watching it. Likewise for Caltiki, The Immortal Monster. It's only been within the last decade or so that I found that one, despite having known about it since I was around eight. And then... there's The Day Mars Invaded Earth, which I only came across because my ex-wife had recorded it on VHS from some late-night picture show.

I recall when I first started watching it — probably sometime in the late 1990s — it initially left me cold, but I stuck with it. The thing I most appreciated was that it was filmed at the Greystone mansion in Beverly Hills, which doubled as Collinwood in the 1990s reboot of Dark Shadows, not to mention appearing in numerous episodes of the Mission: Impossible TV series, among others. As the movie went on, though, I found it becoming increasingly eerie, even a little unsettling. By the time I got to the end, I was pretty much loving this movie.
The Day Mars Invaded Earth is a low, low-budget thriller, ostensibly a science-fiction film, but in mood, more akin to a spooky ghost story. It begins with a space probe landing on Mars — a dorky little motorized contraption — that bursts into flame and disintegrates within minutes of its activation. On Earth, the head of the Mars project, Dr. David Fielding (Kent Taylor) and his partner Web Spencer (William Mims) unsuccessfully try to figure out what the heck has happened to the probe. When Dr. Fielding is alone, a strange energy force appears to overcome him, but he quickly returns to normal. However, after he leaves his office, we see, seated in his chair... another Dr. Fielding.

The real Fielding leaves for a sabbatical in California so he may deal with pressing family issues. His lonely, restless wife, Claire (Marie Windsor) has about had it with his work schedule and feels it may be best for them to separate. However, the kids — son Rocky (Greg Shank) and daughter Judi (Betty Beall) — are blissfully unaware of their parents' strained relationship. In the interest of preserving harmony during their sojourn in the guest house at Claire's family's estate (the Greystone mansion), Fielding and Claire decide to make the best of things. 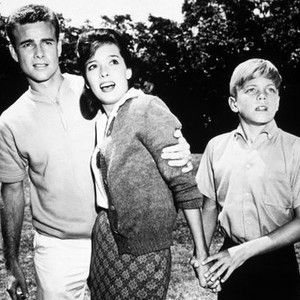 This tenuous state of tranquility turns out to be short-lived. Fielding sees his wife wandering the grounds, but she refuses to answer him when he calls to her and shortly thereafter vanishes. However, when he returns to the house, he finds her there, where she claims to have been all along. Later, an uncharacteristically terse Rocky tells his mother that the door to the main house is unlocked, so she goes to check it out. Once done, she hears slow, heavy footsteps that follow her all the way back to the guest house. Her pursuer turns out to be Dr. Fielding, but he is cold, menacing — and dressed in different clothes. After a visit with the Fieldings, Judi's boyfriend, Frank Hazard (Lowell Brown) is killed in a car crash. And late one night, Judi is visited by a strange figure that turns out to be her doppelganger. It's clear now that each member of the family has seen body doubles of the other family members.

When Web arrives for a visit, Fielding tells him of these strange events and that he's certain they are somehow related to the Mars probe. Then, inside the main house, Fielding encounters his doppelganger, who explains that the inhabitants of Mars — energy beings with the ability to assume the forms of humans — consider Earth's exploration of their planet akin to an invasion, and they intend to stop any further incursions by destroying the space program from within.

The Fieldings attempt to leave the estate, but find themselves locked inside. Web attempts to free them by jimmying the main gate, but before they can leave, he comes to a very bad end....
With a relatively short running time (70 minutes), The Day Mars Invaded Earth is a slow burn. For the first half of  the movie, we're getting to know the characters in considerable detail. Since Dr. Fielding wasn't able to be with the family for Christmas, they celebrate it late —  a distinctly touching and wistful scene. We find out that Fielding doesn't care much for his wife's family. And while the powers that be demand that he return to Cape Canaveral to sort out the disappearance of the Mars Probe, he continually puts them off, desiring to spend as much time with his family as possible in hopes of setting things right with Claire.

For a cheap little science fiction thriller, these characters exhibit some unexpectedly authentic nuances. In particular, Kent Taylor as David Fielding and Marie Windsor as Claire turn in thoughtful performances, never going over the top or phoning in their lines. The gradual build-up, the slow reveal that all is not what it seems, conveys a sense of paranoia reminiscent of Invasion of the Body Snatchers, accented by little touches worthy of The Haunting (the slow footsteps of some unseen party stalking Claire through the grounds; Fielding wandering through the eerie, dark-shadowed interior of the vast mansion before he meets his doppelganger).

By the time the likeable Web Spencer meets his rather gruesome demise, accompanying the rush of impending horror is a genuine sense of tragedy, brought home in jolting fashion at the very end of the film. After investing a good hour-plus getting to know these people — who come across as real people — their fates are meaningful, emotionally. These characters aren't just ciphers; they have proven over the film's running time that they had lives, feelings, strengths, and weaknesses. They almost make you forget you're watching a damn-near zero-budget black & white science fiction picture show.

Now, don't get me wrong. The Day Mars Invaded Earth is not a cinematic masterpiece, or even a landmark film of its day. It's not a particularly sophisticated storyline (though the adult concerns portrayed in the script certainly make it more "sophisticated" than most of the teen-oriented monster mashes from that time period). No, The Day Mars Invaded Earth, for a fairly obscure little movie, pushes most of the right buttons and proves itself a solid bit of cinema that deserves some praise — which is exactly what it gets from me. Three and a half out of five Damned Rodan's Dirty Firetinis — with an extra shot of ghost pepper just for good measure.

The Day Mars Invaded Earth is available on DVD — order it from Amazon.com here.

Posted by Stephen Mark Rainey at 1:04 AM