From York Hill and Rostau to Belews Lake 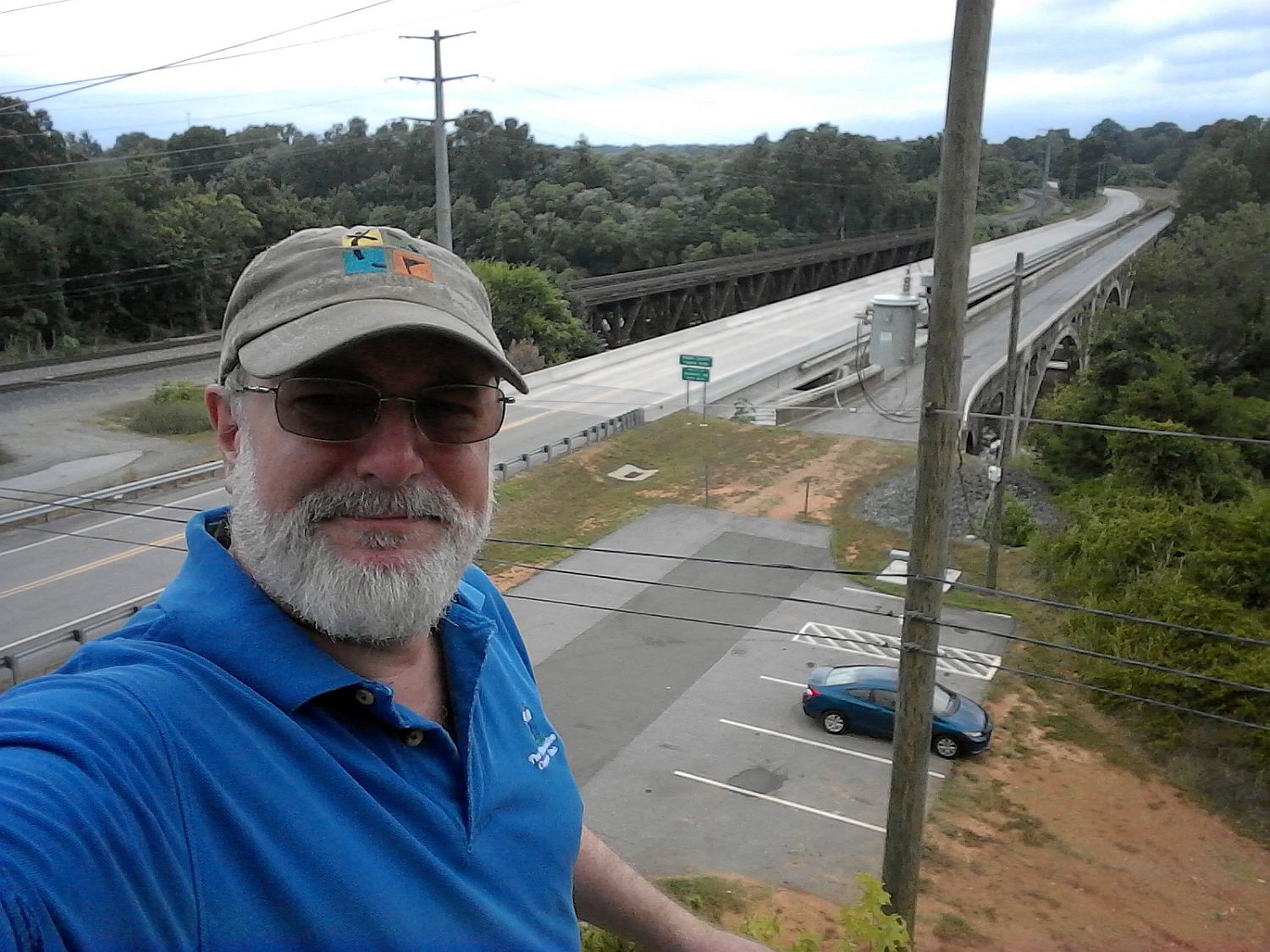 One couldn't have asked for a much nicer weekend to go Geocaching, as the murderous midsummer heat has largely subsided for a couple of days. Yesterday, Bloody Robgso (a.k.a. Robert), Skyhawk63 (a.k.a. Tom), and Old Rodan (a.k.a. me) headed down Lexington way to go after a new series of caches as well as several older ones, a journey that led me to a few of my favorite settings in the world: old, damn-near-creepy ruins, a perch high above the rest of the world, and the darkness deep beneath the earth.

The Watership Down Run, recently placed by Rick247 (a.k.a. Rick), proved pleasant enough — 16 caches along a winding, 3-mile road through a pleasant woodland neighborhood — but the day's highlight came at a place called York Hill, just outside of Lexington, near the site of the last battle of the Civil War in North Carolina. Here, along what at one time was the main highway but that's now a little-used side road, we came upon the remains of an old hotel and restaurant, which included a massive, foliage-covered sign, some fifty feet high; the concrete and brick walls of the structure itself; and a precarious parapet that overlooks US 29 and the Yadkin River (see the old fart in the image above). There were two caches here, both of which we quite enjoyed.
From there, we proceeded to "The Entrance to Rostau" (GC7NX91), a venture into the cool subterranean darkness beneath the convergence of several major highways south of Lexington. "Rostau," in ancient Egypt, referred to a hidden, mystical region, locked in darkness, where the corpse of Osiris resided. Here, we had to determine the correct path into the mystical depths, as there were several entrances to choose from. Inside each passage, as we learned from cache owner Pharaoh9500 (a.k.a. Daniel), one might find a clue indicating a right or wrong choice — if one can determine what to look for. Fortunately, we chose wisely and located the well-placed cache without undue difficulty.

For lunch, we decided, more or less at random, to try Smokey Joe's BBQ Restaurant near downtown Lexington. Now, I've had a fair sampling of Lexington barbecue over the years, and for the most part, I've always found it fair-to-middlin'. But our dead pig at Smokey Joe's turned out to be downright heavenly, as was the fried squash I had on the side. Absolute top marks go to Smokey Joe's, and I may need to revisit Lexington to snag the remaining Geocaches in town and tear into some more Smokey Joe's. What a treat!

Today, more or less on the spur of the moment, I undertook a solo run over to Belews Lake, just this side of Winston-Salem, to hunt a couple of hides that are meant to be reached by boat but that can be accessed by land, albeit with considerable difficulty. One was at an old, abandoned, overgrown marina, which proved enjoyable and relatively easy; the other was just across the lake from the huge Duke Energy plant, and required a strenuous hike up and down long, steep, rocky hills that just about did me in, even in the less-than-severe temperatures. This cache, "Celebrating Pharoah's 8,000th Find" (GC79GH4), proved difficult to find, but find it I did, and after that, I was quite done for the day.

And now... damn, I really want some more Smokey Joe's.