Excerpt #1 from Michigan: The Dragon of Lake Superior 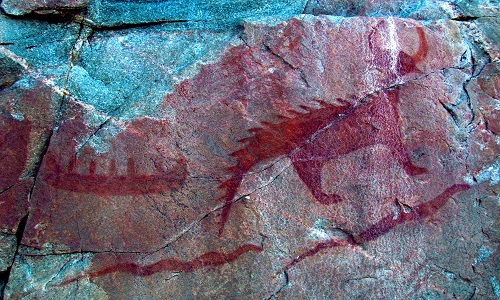 Check out this little excerpt from Michigan: The Dragon of Lake Superior, my second novel in Elizabeth Massie's Ameri-scares series, now in progress and due from Crossroad Press in 2019. Look forward to some marvelously fun frights....

Jeff sped down the rough road, standing on the bike's pedals as he barreled over roots and rocks. Some of the earthen mounds made ideal ramps for launching his bike—and himself—into the air. Each time, he made a perfect landing on the rear wheel and sped onward. The farther he rode, the denser the trees grew. Soon, the road narrowed, becoming little more than a rugged path through the woods.

Ahead, he saw a large, dark mound in the middle of the path. It looked like the perfect jump ramp. He stood on the pedals and pumped them hard to pick up speed. The mound, he realized, appeared almost perfectly oval and rose at least three feet high. It was gray-black in color, with a texture like tree bark.

But it could not be a fallen tree, not shaped like that....

As he hit the mound, he pulled up on the handlebars to lift the front wheel. The bike flew into the air. But then, as if the mound had thrust itself upward, something hit his rear tire and threw him off balance. The bike lurched, and his feet left the pedals. The next thing he knew, the ground was hurtling toward him.

He hit the dirt hard, and his breath exploded from his lungs. He saw his bike above him, falling toward him as if in slow motion. It crashed down right on top of him. The end of one handlebar slammed into his stomach. For the first time in his life, he knew what it meant to see stars.

He lay there for what seemed like an hour, struggling to breathe. Once the stars dimmed and his vision returned, he saw his bike lying a few feet away. It looked okay, he thought—until he saw the chain hanging loose from its sprockets.

“Oh, no,” he groaned. If the chain was broken, he had a long way to push his bike.

Taking care not to move too quickly, he sat up. With a sigh of disgust, he brushed the dirt from his arms and legs. When he glanced back the way he had come, every blood cell in his body turned to ice.

The mound that had caused him to wreck was gone.

In its place, he saw a deep depression, roughly oval shaped, at least eight feet long and four feet wide.

#
Second excerpt from Michigan: The Dragon of Lake Superior

Third excerpt from Michigan: The Dragon of Lake Superior
Posted by Stephen Mark Rainey at 7:27 PM