I See a Blood Moon Rising 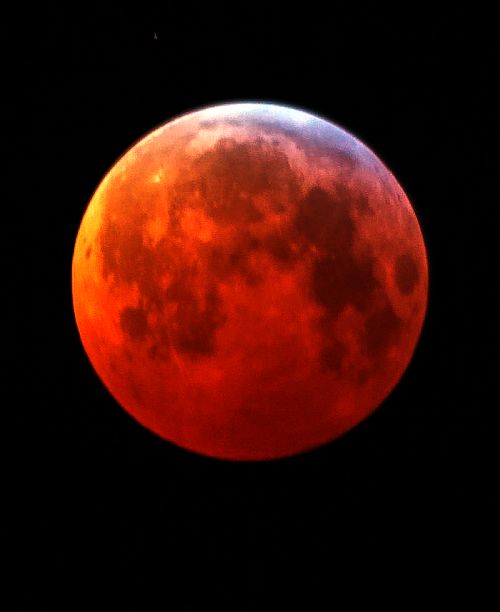 That's not my own photo—my phone camera doesn't exactly take beautiful photos of blood moons (or much of anything at night with any clarity)—but that image is precisely what I saw last night, directly overhead, in a crystal-clear sky. About 11:30 p.m., I popped out into the icy, windy night; looked at the encroaching shadow of the earth on the moon for a bit; then hauled myself back indoors to watch a couple of episodes of Space: 1999 ("Mission of the Darians" and "Dragon's Domain," the latter being the best episode of the entire series). Several more times until well after midnight, I ventured into the frigid night air to gaze in awe at the spectacle upstairs.

It was nice to have Martin Luther King Day off today, although it seems to be at the expense of extra days at Christmas and New Years at the end of this year. Feh. In any event, despite it being a blustery, frigid day, Ms. fishdownthestair (a.k.a. Natalie) and I went down to High Point to pick up three new-ish geocaches. All were relatively easy and quite fun. I also needed to do maintenance on my puzzle cache, Coordinate Crossing (GC2TC82), in Gibson Park. This involved climbing some ways up a tree to change out a waterlogged logsheet, an experience made unusually intense by the biting wind. Got it done, though. Yesterday, on a maintenance visit to Martinsville, I climbed the tree at The Tilting Terror (GC7VZND) to replace that wayward container. So it's been a fine couple of days for going up trees in very cold weather.

Today, had a post-geocaching lunch with Ms. fishdownthestair today at Thai Chiang Mai in High Point, which is actually quite close to the office, though I never venture over there at lunchtime because that area is a madhouse, and I'm not that bloody insane. Even today it was busy, though at least tolerable. Very good, very spicy pork larb for me.

And for the rest of the day, I'll be making forward progress on my Ameri-Scares projects, both writing-wise and promotion-wise.