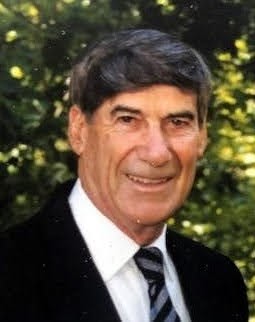 Back in high school, my driver's ed instructor was the late, great Coach Robert C. "Husky" Hall, who passed away back in April. He was, to me, a bona fide folk hero. Champion basketball coach, golf team coach (in my senior year, I graced — or disgraced — the golf team with my presence), and quite possibly the most notorious driver's ed instructor in the history of driver's ed. Coach Hall took no guff, and you usually had exactly one shot at performing to his satisfaction. He had a big old class ring with which he would happily thump you on the head if you displeased him. Thankfully, I never got thumped — or if I did, the blow was sufficient to erase my memory of the event.

I admired Coach Hall and felt fiercely loyal to him. He was my kind of curmudgeon, even when I was on the receiving end of his ire. I have quite a few memories of him, but the most vivid was my first time out on the highway behind the wheel, with him keeping an eagle eye on my every move.

I was heading out US 58 eastbound, just beyond the Martinsville city limits. I'm doing 53 mph, hands at 10 and 2 on the wheel, feeling very comfortable driving, as my dad taught me a year or so before I started driver's ed.

"How fast are you going?" Coach Hall asks.

Coach Hall reaches over, shoves down on my knee, so I end up flooring the accelerator.

"How fast are you going?"

I point to his hand, still pushing down on my knee.

"Yes, Coach Hall."
So that might have been damn near traumatic, but later, he gave me his official "best driver in the class" endorsement by dragging me out of a class I didn't much want to be in to drive him to Bassett, about 20 minutes from Martinsville. He apparently had business at the school there and figured it was a good opportunity to give me some additional experience. That sure made me proud, and this time around, he was as nice and cordial and not-at-all curmudgeonly as a gentleman could be. And that was how he continued to be with me — until I joined the golf team.
How I managed to escape the thump to the head during that spell remains an unsolvable mystery.
Posted by Stephen Mark Rainey at 5:31 PM