Monday, October 18, 2021: Au Revoir La France, Buon Giorno Venezia
Early Monday morning, our gang packed up la voiture — we had to squeeze in so snugly that Ms. B. and I were practically sitting on one another — and hit the highway, bound for Nice Aeroport, about two hours east. Getting past Aix-en-Provence was the usual traffic nightmare, but once we made it to the A8, things picked up and moved along swimmingly. When we arrived at the aeroport, we moved through security and such with minimal hassle, though we never did have to show our COVID-19 test cards, which was actually wee annoying, given the pains we took to actually get the things. Regardless, we had some peace of mind that we remained COVID-free, at least for the first portion of our journey.

We boarded an Easy Jet Airlines Airbus 319 for the relatively short flight to Venice. Upon our arrival, we took a bus ride to the station just outside the city and then hoofed it across the Grand Canal to the island. We had a relatively short walk to our lodgings in the Fondamenta Procuratie, where we met our proprietor, a lovely lady who spoke decent English and made us feel very welcome. Once settled, we headed out into the lovely afternoon and walked. I snagged a couple of caches. One of them was cache find #13,000, at a rather noteworthy location: (Banksy a Venezia, GC8F84J). We found wine. We found food. We retired to our lodgings before very late, but we did sit up with wine and goodies pretty far into the evening.
Tuesday, October 19, 2021: Bells Are Ringing
The weather was perfect for another early morning walk, so Terry and I went out among the madding crowd and sought a trio of geocaches. I found two, did not find one (though I would discover it later — after a fashion). Once back at our place and regrouped, the gang went out and about for a bit and found lunch nearby at Osteria San Barnaba. There were sights to see and caches to snag near the Rialto Bridge, so we headed for the more eastward reaches of the city. I claimed a webcam cache (Rialto Webcam; GC89135) and an EarthCache (Rialto Bridge; GC7JZRA), as well as a stage of a nearby Adventure Lab cache.


The big event of the day, though, was first and foremost among our reasons for venturing overseas to begin with. Although Ms. B. and I had been legally married back in June, mainly to make sure our asses were covered — financially, legally, and otherwise — as we began merging our households, we really wanted to have our most meaningful ceremony in Venice. Terry had agreed to officiate for us, so all that remained was to determine precisely where and when. Once we had settled into our apartment, we decided it was the perfect location. Our elevated balcony overlooked a scenic canal, and from there, we didn't have to worry about muggles getting in the way of the proceedings. And on this afternoon, the timing struck us as right to proceed. Once we all agreed on this decision, our respective womenfolk decreed that neat dress was required. So, we old men dressed up all nice and such, gathered ourselves in most dignified fashion, and Brugger and I got hitched. Maybe not "legally" in the technical sense, but absolutely and positively as far as our commitment to each other.

Once these somber proceedings were in the can, we decided to remain dressed in our finest finery and go out to mingle with the population. If you guessed there might have been another cache in the bargain, you would be correct. If you guessed there might have been more food and wine in the bargain, you would be correct again. For dinner, we discovered a wonderful outdoor place called Ristorante Fuori Rotta, where I ended up ordering fish (filet of sole) and white wine. If you think that was pretty weird of me, you be yet again correct, but since this combination called to me at the time, it happened thusly. Dinner proved fabulous. As did the day. One could hardly have custom-ordered a better day or more exciting time.
Perfection, it was. 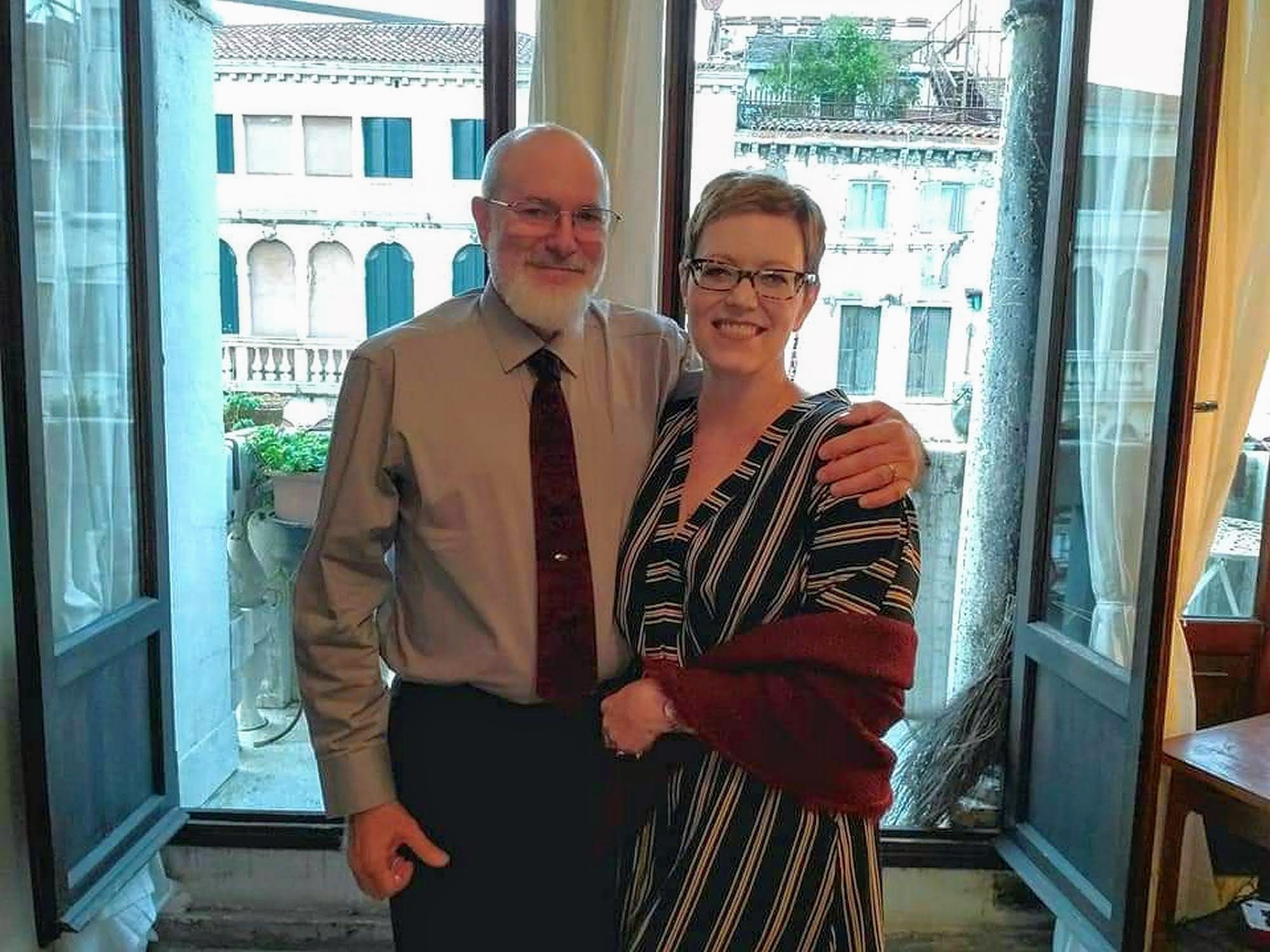 I woke up reasonably early on Wednesday, intent on going on a longer-than-customary walk through Venice to seek a couple of geocaches. Terry opted to stay put while I went out, so I pushed myself into an even longer longer-than-customary morning walk. One stop was at a walled park ("Parco Savorgnan," GC58W7X), which was probably the only deserted spot in Venice I encountered during our stay there. I also snagged a puzzle cache I had solved earlier ("Do You Really Know Venezia's Mysteries," GC7R0NH), one of those rare puzzles that was actually fun because you had to match up scenes in Venice to locations on a map to acquire the final coordinates. Once I reached GZ, this one took me a few minutes to find, but I finally managed it.
I wasn't back from my walk long before we headed out as a group to seek lunch. We found it at a little place along the waterfront called OKE Zattere, where we had pizzas — very good pizzas. Then Terry and Beth treated Kim and me to a gondola ride, something of a post-wedding treat. We all managed to pile into the boat without falling out (so none of the dreaded canal sharks got to have a feast*). We did have an excellent gondolier, who spoke decent English and more than politely tolerated our generally clumsy attempts to converse in Italian. We brought a bottle of wine with us, which made for a super-mellow ride through the canals. A first-class time it was. Thanks, Terry & Beth!

*No, there aren't really canal sharks. I don't think. 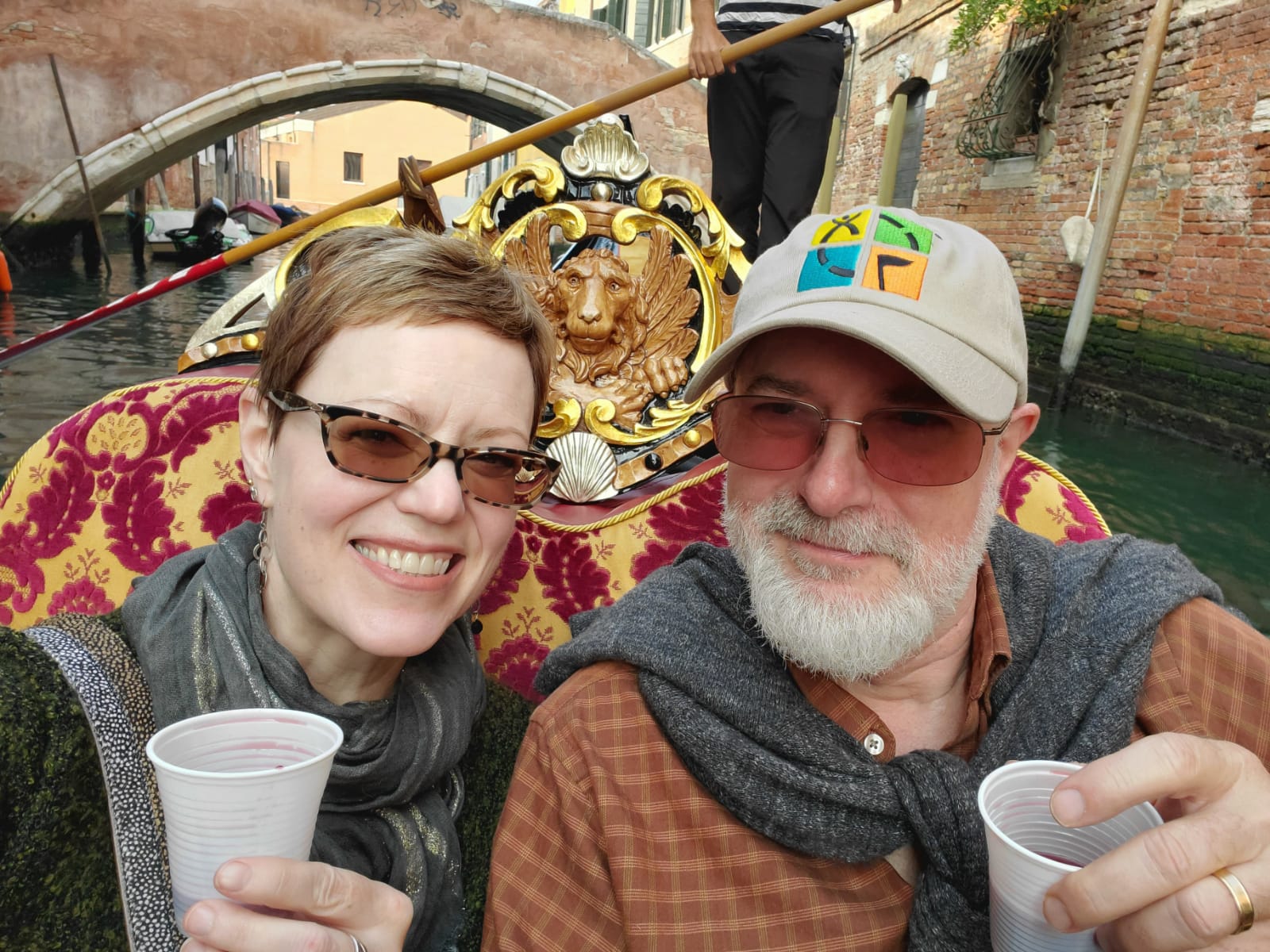 After this, our compadres retired to our home-away-from-home for a while, so Kimberly and I went out among the peasants to survey the grandeur. She was kind enough to accompany me to a few caches I was keen on finding — one  being a wicked-witch-of-Venice-themed multi ("La Sveglia Della Strega," GC8F85W), and a couple down by St. Mark's Square, my favorite being a particularly audacious little hide at a bas-relief sculpture at the edge of the square (Piazza San Marco, GC8VKZF). While we were there snapping photos, I caught something in one that I didn't quite get. It appears to show five distinct orbs in the sky, just about mid-picture (you can zoom in on the photo down below). No doubt, these were just reflections on the lens, or an odd diffusion of light, or...something.
Maybe UFOs.
Finally, Kimberly and I headed back westward to Piazza San Barnaba, where we met Terry & Beth at a nice little outdoor bistro called Dallo Zio. I had liver and polenta, which I found quite pleasing after so much pasta and cheese. Our dinner ran pretty late, and by the time we were finished, the gang decided to head back to our place. However, I had discovered that one of the caches I had been unable to find the previous day, due to it being missing, had just been replaced. From our restaurant, it was about a half mile to the cache. After the day's activities, I had about 15% phone battery remaining — and I didn't have my spare battery pack with me. Regardless, I set out after the hide. Once at GZ, I finally managed to locate the thing. Whew!
By now, the phone battery was running lower and lower, and though I know the basic geography of Venice, I do not know its labyrinthine streets that well. So, I made haste toward our place, fearing my phone might go dark at any time. Happily, I made it back with power to spare. What a fun outing for this evening. Quite the adrenaline rush there near the end.
Our time in Venice was short, as we were scheduled to leave the following day — for me, not such a happy thing, since both my visits to Venice have been dreams come true. Still, we had several different destinations ahead of us before our eventual return to the States. And our next destination — a century-old villa outside the little town of Monteveglio, near Bologne — certainly held some surprises, almost all pleasant.
Go to "The Old World or Bust!" (Part 1) here.
Go to "The Old World or Bust!" (Part 3) here.
Go to "The Old World or Bust!" (Part 4) here.
Go to "The Old World or Bust!" (Part 5) here.
Posted by Stephen Mark Rainey at 5:04 PM