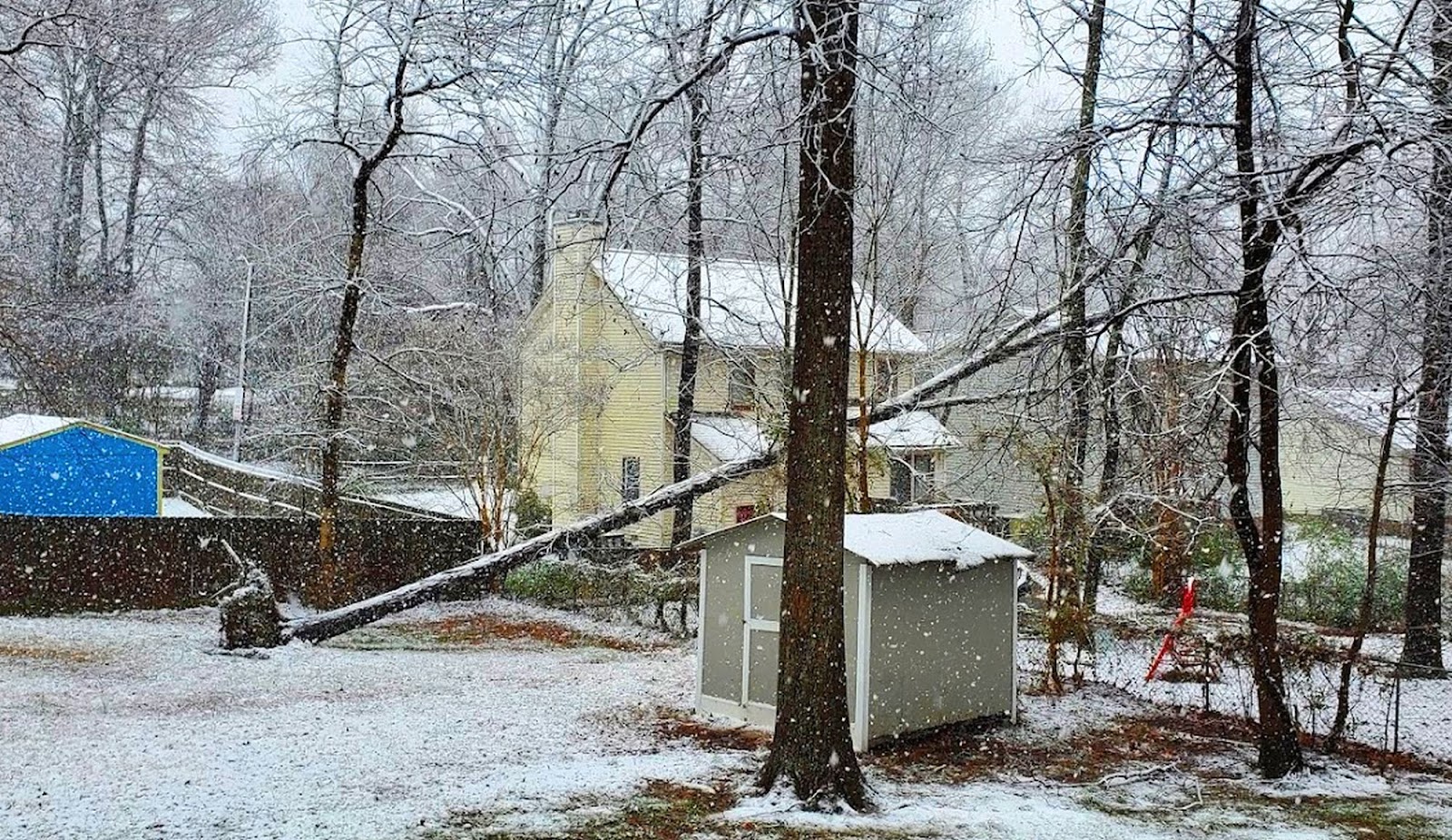 Immediately upon our return from Myrtle Beach last weekend, dire weather fell upon us. We had only a light coating of snow, but there was ice aplenty and winds like I've not heard since the last hurricane to blow through here some years ago. We lost power at 4:00 a.m. Monday morning, though it came back on about noon — some kind of speed record for Duke Energy. Our yard became a mess of branches and sticks, but next door, a whole tree uprooted and fell. It remained as you see it in the photo above for several days, until finally, this weekend, the neighbors took it upon themselves to get rid of it. Rather than call professionals — an admittedly expensive prospect — they employed a couple of friends, a pair of electric chainsaws (one of which got stuck in the tree for a day or so), an assortment of wooden boards, a footstool, and a pickup truck (which got stuck in the mud in their backyard for a day or so).
On Friday afternoon, I headed to Martinsville while the trio of men were out there working, so I didn't get to see how things eventually unfolded. But when I arrived back here yesterday, the tree was gone. The fence between yards (which I believe actually belongs to the neighbors behind the next-door folk) failed to escape damage (relatively minor), and there are deep ruts and mud splatters aplenty in their backyard (and part of ours). However, to the best of my knowledge — and by some minor miracle — none of the guys out there suffered death or dismemberment. I guess you'd call that a win for do-it-yourselfing.
More snow fell in Martinsville than here in Greensboro, but there appeared to be less ice and far less property damage. I have no idea whether it was actually storm-related or not, but the heat pump at Pleasant Hill had ceased the pumping of heat, so I found the house rather chilly. Yesterday morning, I managed to engage a service tech, who determined the system needed a new thermostat. He installed one, which got the heat pump working again, but a most complicated device, this thermostat. I hope I can figure it out without needing to go back to school to get an engineering degree. In any event, I managed to get the Christmas decorations taken down and finish up a significant writing project, which I'll be promoting the hell out of in the coming days.


Since today's weather, at least for the morning, appeared conducive to geocaching, three old farts — Scott (a.k.a. Diefenbaker), Old Rob (a.k.a. Old Rob), et moi — decided to head eastward to several different locations, culminating in Hillsborough, where a new Adventure Lab cache awaited us. First, we headed to the Haw River Trail in Graham to see if we could snag first-to-find honors on a newly published hide (we did); then we zoomed over to a nearby park & grab hide, of which we made very short work; and finally, we moved on to Hillsborough. The Adventure Lab cache ("Historical Churches of Hillsborough") took us around the town's picturesque historical district, to... guess what... several historical churches. Hillsborough is a lovely town to walk around, and we enjoyed the opportunity to see the sights (again).
We topped off our Hillsborough outing with a visit to Hillsborough BBQ Company, which is a longstanding tradition when we're over in that neck of the woods. I'm a smoked beef brisket junkie, and Hillsborough BBQ Company has historically had some of the best brisket I've ever tasted. Some time ago — over a year, I'm guessing — we had visited to find the brisket not quite up to snuff. Not bad, just not top-notch. Someone we met on another caching trip told us that the restaurant had changed their smoking time or process or something, but the brisket was definitely inferior. Regardless, I wanted to make sure they had another chance, and this time around, it was better. Much better. Maybe not quite what it used to be (and certainly not as eyes-rolling-back-in-the-head-incredible as The Smoke Pit in Salisbury, which is now our favorite brisket venue), but we were altogether satisfied. Plus I found a really good, jalapeno IPA (Fire Escape, Asheville Brewing Company). So Hillsborough BBQ is most definitely back in my good graces (not that it ever fell very far). 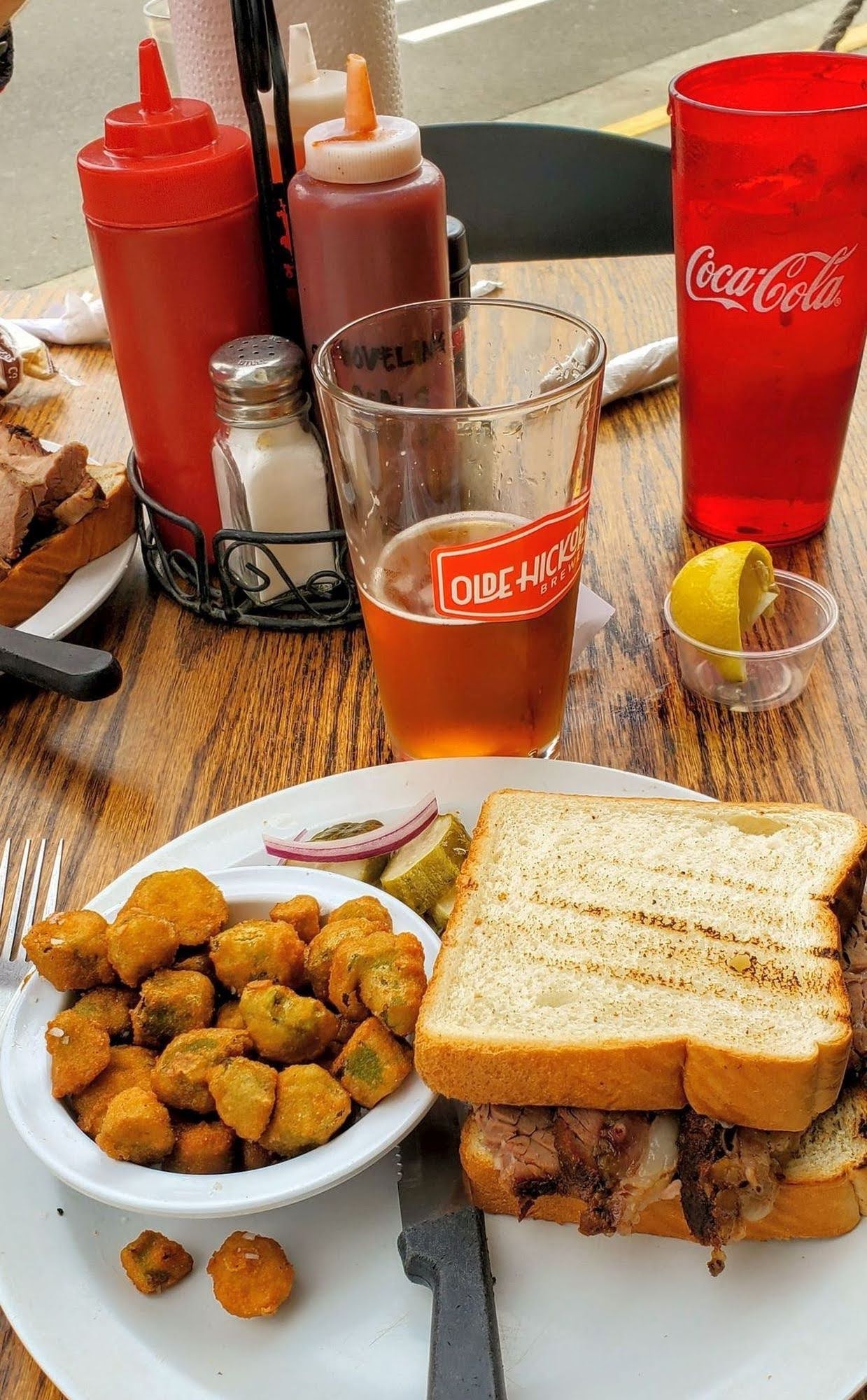 But speaking of falling far....
The most frustrating — no, infuriating — issue of the weekend was discovering that Blogger (and by default, Google) fucked up my blog in numerous instances by their constant altering of code. At one time, formatting this blog, including placing photos (for which one might have a reasonable expectation of being permanent, since they're from Google's own blog photo hosting site) was simple. You could pop a photo in, place it as you desired, look at the html code, and see the photo ID in the code. No longer. Now you get typical Google Photos gobbledygook for the ID, leaving you with no way to trace it back to its origin. But the worst issue here was that a shitload of my blog photos, mostly from 2017, now displayed only broken link images. So I ended up spending a massive amount of time replacing and relinking the pics — with no guarantee the code will actually hold. Jesus God...  this constant ABSOLUTELY GODDAMN NEEDLESS fucking around with the blog code by bunch of technological halfwits is so infuriating, if it were up to me, I'd shitcan the lot of them (the decision makers, anyway) and make sure not a one of them could work in a technological environment ever again. Maybe cleaning shit out of pigpens would be more suitable.
Anyway. Go on, git. Bye.
Posted by Stephen Mark Rainey at 6:01 PM