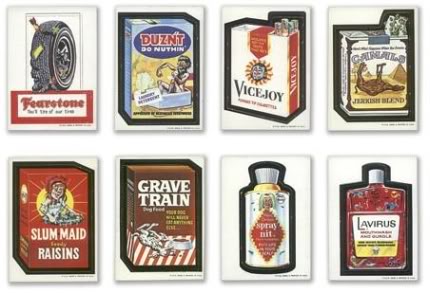 If you're an old fart like me, you might remember Wacky Packages. They were cards and stickers produced by Topps that depicted popular products of the day—with a bit of a twist. Clever and irreverent, they ended up plastered all over our school, our books, our bicycle seats, our lunch boxes...you name it; anywhere you could stick a Wacky Packages sticker, there you'd find one. I remember getting a set on Halloween (1968, I think it was) and being grossed out by the image of an adhesive bandage—"Band-Ache" brand, it was called—graphically ripping the skin off the back of some poor fellow's hand. A picture of bugs hopping out of a hole in an ugly woman's head, which appeared on the front of the "Spray Nit" hair infester spray can, just about put me off my Halloween dinner (which was a Hardee's hamburger). After seeing masses of worms crawling around inside the "Skimpy" peanut butter jar, I pretty much lost my taste for peanut butter for several years.

But I loved those cards something fierce. They were special. The art was irresistible, the play on real products was brilliant, and kids who had Wacky Packages stickers on the covers of their school notebooks were guaranteed to be cool.

A while back, I went looking on the Internet for info about Wacky Packages, and I found a few good sites, the best being www.wackypackages.org, which features a complete index of the sets, along with images. If anything, I probably have more appreciation for these things than I did back in the day; there's little I'd love more than to find some of those cards buried within the boxes of ancient goodies that remain in the attic back at the old homestead, though I fear they've long since vanished. (I'm pretty sure I traded at least some of them away for Hot Wheels cars, which, back in the day, made perfect sense, though nowadays I'd much rather have the cards than the cars.)

If you have a soft spot for irreverent and slightly icky fun stuff, check out the Wacky Packages index. If you're old like me, maybe they'll bring back some enjoyable memories.

As for other events, this afternoon after work, I went seeking a few geocaches here in town (there are thousands of them). Most of the ones in this area are micros, meaning they're tiny cylinders, cleverly hidden, containing log sheets to sign when you find them. I found three of the five I was seeking; the areas where other two were located were brimming with muggles (non-geocaching indigenous personnel), which precluded any searching. I shall have to venture forth at an hour when muggles ought to be fewer and farther between.
Posted by Stephen Mark Rainey at 9:12 PM

I said that they are readily available on eBay - not that expensive - SHOP VICTORIOUSLY!