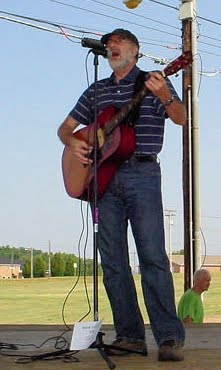 What a wretched weekend! Friday night, headed up to Martinsville and found a few caches on the way; undertook a late-night walk through my old stomping grounds in the company of some bourbon and ginger ale; on Saturday morning, played guitar and sang with my friend Kim at the Martinsville Farmers' Market (which was nicely written up in the Martinsville Bulletin), followed by a first-rate lunch at El Norteño; placed three geocaches on the newest extension of the Martinsville "Dick & Willie" Rail Trail; went to an excellent wine tasting party at some good friends' place; and spent a fair amount of quality time with Mum and our friend Mary Clifton. Coming back to Greensboro today, found several new caches, including one that led us on a tour of Reidsville's extensive and quite old Greenview Cemetery.

Wait. Did I say "wretched" up yonder? Hmm. I might have goofed....
Posted by Stephen Mark Rainey at 5:17 PM

Sounds like a great time, Mark! And that's a really nice foe-toe!

The Kincaid decrees that you're having too much fun. Stop that! =]

Beth: It was a hoot. Hope to do it again sometime.

Jack: It was an accident!

Thanks for the strumming and singing at the market. Joyce was very impressed. You're welcome to come hoot and holler at the farmer's market any Saturday.