If At First You Don't Succeed, Triphibian 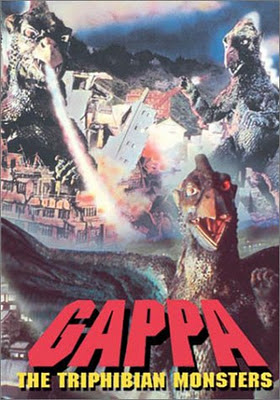 Gappa, the Triphibian Monster, a.k.a. Monster From a Prehistoric Planet (Daikyojū Gappa, 1967)

The president of Playmate enterprises, Mr. Funazu (Keisuke Inoue), sends an expedition to Obelisk Island in the South Pacific to gather tropical flora and fauna for Playmate Land, the latest amusement park in Japan. The expedition finds a native village, complete with resident natives; a big old cave; and a monster-sized egg. The egg hatches, and out pops a strange, birdlike reptile, which—according to the natives—is a baby Gappa, their most revered deity. The expedition returns to Japan, taking the creature with them, but mom and pop Gappa emerge from the cave and head to Japan to bring the little one home. Much urban destruction results, but at the end of it all, the more level-headed team members endeavor to return the baby to its parents. The three monsters take to the air and fly back to Obelisk Island to live in peace—perhaps to chow down on more natives, assuming the critters have left a few survivors.

In the mid 1960s, the now-defunct Nikkatsu Productions endeavored to capitalize on the daikaiju craze, which was at its height, with something of a satire. Gappa takes most of the clichéd elements of the standard giant monster film—an exotic South Pacific setting, a greedy exploiter who wants to capitalize on the discovery of the critter, major city destruction, and all-out efforts by the military to stop the monsters—and delivers a package that mostly succeeds, both as send-up and as traditional daikaiju fare. Particularly noteworthy are the special effects by Akira Watanabe, who was a protegé of renowned special effects director Eiji Tsuburaya. While certainly a couple of notches beneath Tsuburaya's, the effects work is a darn sight better than many of the film's contemporaries, including some of Toho's own. The Gappas themselves resemble gigantic gargoyles, with birdlike beaks; leathery bat wings; and scaly, reptilian hide. The effects cinematography is colorful and often atmospheric, particularly during the extensive scenes of city destruction. One noteworthy effects scene is the toppling of the Obelisk natives' stone totem that guards the Gappas' cave entrance, which is 100% convincing.

The cast is an ensemble typical of so many daikaiju offerings from the Showa era; one can just envision a group of Toho regulars, such as Akira Kubo, Kenji Sahara, Tadao Takashima, Kumi Mizuno, and Yu Fujiki, taking on the roles of the expedition members. Not to demean the cast members of the film itself; they're quite adequate in the roles they play, though—as one might imagine—none of the parts in this film were apt to propel the actors to stardom.

The score by Seitaro Omori is adequate, with a handful of distinctive themes that make the soundtrack listenable on its own. However, having grown up with the U.S. version (Monster From a Prehistoric Planet, released by AIP-TV), when I watched the Japanese version, I found it rather jarring to be hit with the bizarre and supremely obnoxious title track ("GAPPA! GAPPA! GAPPA!") rather than the more familiar, traditional orchestral composition of the U.S. release, which is actually pretty good. There's also a song at the end of the Japanese version, happily excised from the U.S. release, which is apt to shake your teeth loose. Interestingly, many scenes during the monsters' attack are devoid of any scoring whatsoever, which actually works on a more serious level, accentuating the scope of the destruction being wrought.

No question, Gappa is a mixed bag; a mediocre story, a bunch of non-memorable people scenes, and some decently rendered monster action. But even its dramatic failings have their amusing moments—which the hellish English dubbing often accentuates; thus, given the fine DVD presentation by Media Blasters/Tokyo Shock (their first tokusatsu release), which includes both the Japanese and U.S. versions in wide-screen, I give Gappa an unabashed recommendation. It's not a great film, or even necessarily good, but it really is a lot of fun, particularly if watching detailed miniature cities receiving a thorough trouncing makes your day worthwhile. 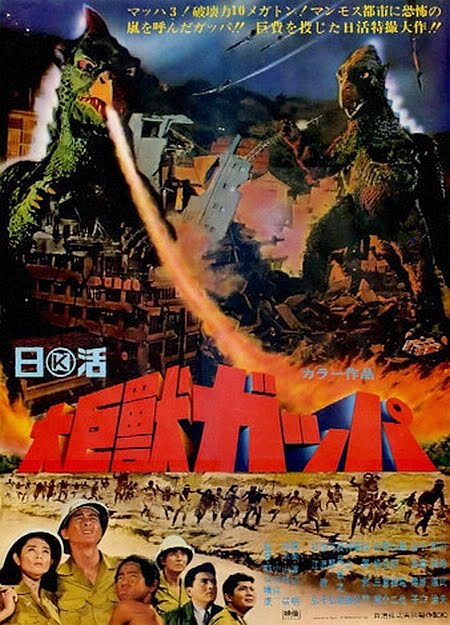 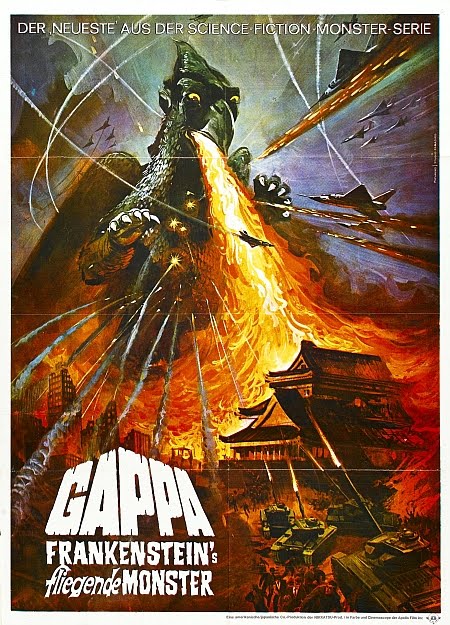